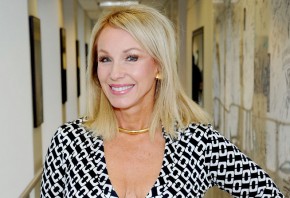 A few weeks ago we attended the kickoff for Lea Black’s first novel, Red Carpets and White Lies [see here]. The Coral Gables event, hosted by musician and producer Emilio Estefan, was enjoyed by many. Mrs. Black, the “Social Mayor of Miami,” Real Housewives of Miami star, philanthropist, entrepreneur, wife of prominent attorney Roy Black, mother and now author joined featured columnist Jay Bildstein and me, for an in-depth conversation about her first work of fiction.

Lea shares why she wrote Red Carpets and White Lies:

Richard Johnson, of New York Post Page Six fame, gave Lea Black a ringing endorsement when he published a piece in April about her debut novel. He wrote, “Move over Jackie Collins.” Lea told us what she thought about being mentioned with NY Times Bestselling author Jackie Collins:

“That came out of nowhere. I mean, even my husband [Roy Black] says, ‘You should call up Richard Johnson and get him a million dollars.’ Well, like I have a million to give him. But he says, ‘You can’t get that kind of publicity.’ It was like, I really was shocked to read that. It was quite the compliment, but, you know what? I have kind of found in, at this point in my life, it’s like, rent is not due tomorrow, I don’t have to sell this book to pay my bills, it’s a fun, guilty, pleasure hobby. If it does well, I am gonna have fun and enjoy the ride. If it doesn’t do well, I’ll probably write another one and try to do better. If it does well, I’ll probably write another one and know I can do better. So I’m kind of enjoying the journey and not so much worried about the destination.”

This past October, music superstar Gloria Estefan and her husband, musician and producer Emilio Estefan made an appearance at the 20th edition of The Blacks’ Annual Gala. Lea spends months planning the yearly event. See our coverage of the Estefans at that event [here]. On what Gloria and Emilio Estefan think of her new book, the Social Mayor of Miami said this:

“Gloria read it for sure, loved it. Love, love, loved it! Said, I’ll give you a great quote for the press and I have to follow up and get that quote. Emilio, I don’t know. I haven’t asked him if he read it. It’s a good question. I’m gonna make sure he does.”

Speaking of Galas, in Red Carpets and White Lies, the main storyline in the book is about Miami’s most anticipated gala. On whether Lea will be hosting the 21st edition of The Blacks’ Annual Gala this year, she said this:

“We’re working on something a little bit different and it hasn’t evolved yet. But we will do something because the kids need the money so bad and it impacts so many kids’ lives. Whether or not it will be a full blown, 900 person, you know, Pharrell Williams entertainer, gala, I don’t know if I am up for that right now. It’s literally a five month, six month out of the year exhausting process and then two or three months of aftermath and cleanup and then you get ready for the next one. So I may do something a little more creative and a little different this time, but still will definitely be raising money.”

If reading Lea’s first work of fiction is not enough for you, The Real Housewives of Miami star’s publisher has asked her to write two more books with a similar theme. The main character in her first novel has many of Lea’s qualities. On what she likes about the main character and how it relates to her own life perspective, she said this:

“She makes things happen, that when adversity comes her way, she figures out a way to manipulate around it or maneuver around it or over, you know, compensate for it and it doesn’t stop her from getting where she wants to go or accomplishing the things that she wants to accomplish. And I think that, that, I like that quality in anybody, men, women, children, I like, I mean, look, there’s a million ways in life to get a no. I mean, there’s a no around every corner. If you let no stop you or can’t stop you or won’t stop you, you’re never gonna accomplish anything. So for me, you know, to accomplish something, you have to be the person that just accepts no like, you know, so what, next and keep going. That’s one of the things I like about the lead character in the book.”