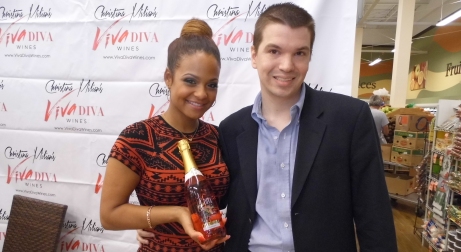 Back in July 2012 we met pop music star Christina Milian at the opening event of Mercedes- Benz Fashion Week Swim on South Beach [see here]. Now, some 15 months later, we caught up with the Cuban beauty for her CYInterview.

Last year, the Dip it Low singer launched a Havana Nights swimsuit collection. This year, Ms. Milian came back to Miami, off her recent Dancing with the Stars run, to promote Viva Diva wine.

We caught up with the multitalented performer at a Sedano’s supermarket in Miami, where this line of wine is currently being sold, in addition to 20 Walmart stores. Beyond her wine collection, Christina spoke about her Dancing with the Stars experience, New Year’s resolutions and Beyonce’s album release, among other topics.

Remembering the first time we met back in the summer 2012, Ms. Milian had these reflections:

“It’s lovely to see you once again. Of course, another great celebration last time I saw you; I was actually celebrating and releasing my swimwear line with Nicolita and that was Havana Nights. Now, I’m back again with Viva Diva. You know, so Miami keeps calling me back which is great and of course so do the fans and I love to come over here and just present my new products and my lifestyle to my fans.”

When it comes to her Viva Diva wine collection, Christina said this:

“I came into the wine business because wine is just something I think is just like a special, part of my life is my friendships, my family and these moments that goes beyond work that sometimes you just need to relax and you just need to bond or you just need to just chill out and wine does that for me.”

On why she has recently gotten into product endorsement, the singer remarked:

“I think the transition comes from like the fight for your ideas. You know people can have ideas, but you can present them to everybody. Is anybody gonna have the same passion as you are for your own product? Maybe, maybe not, but why wait? So right now I’m in a place in my life where I don’t want to wait. If I have something I believe in and I have a passion to do it, I’m gonna put my money up for it. You know I’m gonna do whatever I possibly can to make it succeed and give it my time and my all.

You know, so I’ve wasted many years waiting for other people to help make things happen for me or having meetings and all that stuff that sounded like it was gonna get to something whatever the idea was and now I got fed up and I said, ‘It’s time. I can’t. I don’t have time to wait. I’m a mom now.’ So time to go out there and get it.”

This year, millions saw the 32 year old show her dance moves on season 17 of Dancing with the Stars. Summing up what she gained from the experience on the ABC show, Ms. Milian shared the following:

“I got over some fears. That’s one of the biggest thing. I got this feeling of just a great amount of love and a new audience and people that were very encouraging to me, but mostly you know I went on there with the idea knowing that I was really scared to do it. So that’s exactly why I went and attacked it. So I walked away with courage and also just some new choreography and trying some new things and some new friends as well.”

Over the last few years, Christina has been very candid about her challenges with motherhood. She spoke to us about that:

“We’re doing great. My daughter’s fantastic. She’s an awesome kid. She’ll be four in the end of February. So you know right now she’s in the space where she’s talking like crazy and wants to entertain us all and we just have an amazing bond. You know, she’s a special kid. She understands my job and she’s also very entertaining and she’s just very understanding. I think she’s a great kid.”

As we end the year it is never too early for New Year’s Resolutions. These are hers:

“To continue 2014 the way 2013 was going. Push, push hard, work harder, get in better shape, be more consistent and that’s about it. We’re doing pretty good right now.”

Last week, Beyonce released, without the typical build up and fanfare, what some people are calling a visual album. Ms. Knowles released a set of 14 songs and 17 music videos simply titled, BEYONCÉ. Ms. Milian gave us her thoughts:

“I think it’s fantastic. You know, I think that’s exactly what I was expressing. You know it’s time to take control, take the reigns and make your own rules. You know what, people get caught up so much in like old traditional ideas of what you’re supposed to do and how you’re supposed to come out and she proved that there are no rules when it comes to this and she doesn’t need any promotion at all. People love Beyonce. She’s on a fierce tour right now, she’s an amazing artist, she sounds fantastic and she’s showing her maturity I think with this album. I think it was actually great how she unveiled it. You know, it’s opposite of everything she’s already done.”

You can find out more about Viva Diva wine here.