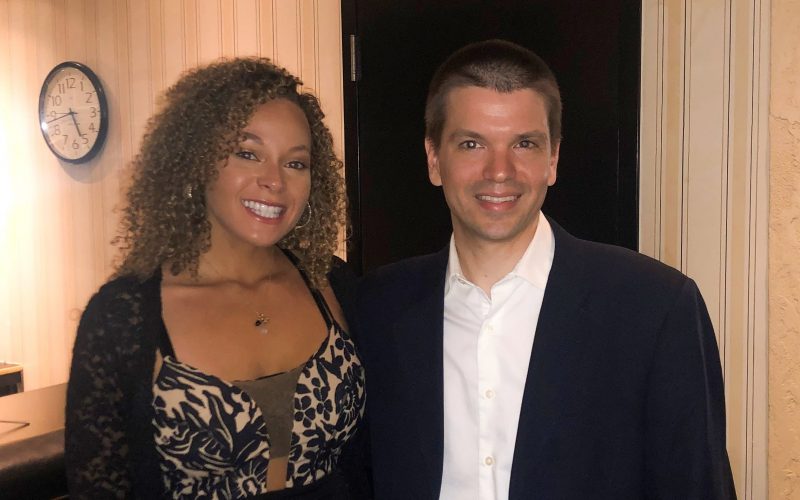 For years, singer/actress Cheyenne Elliott has been touring with her grandmother, Dionne Warwick. This month she is here in Las Vegas. We recently CYInterviewed Dionne Warwick about her concert series, this month, at Bally’s Hotel and Casino [see here] as well as attending opening night [see here].

On Ms. Warwick’s opening night, I saw Cheyenne perform and was quite impressed. The 24 year old is the next generation in a family of music royalty including her grandmother Dionne Warwick, cousin, the late Whitney Houston, father David Elliott a singer, musician and songwriter and uncle Damon Elliott a producer and singer. Additionally, she is related to Whitney’s mother, singer/actress Cissy Houston and opera singer Leontyne Price.

Watching Cheyenne Elliott perform alongside her legendary grandmother, you begin to see how she bears a resemblance to her, as well as to her cousin, Whitney Houston. This past weekend we CYInterviewed Ms. Elliott, backstage before she went on to perform with Ms. Warwick at the Jubilee Theater, at Bally’s Hotel and Casino in Las Vegas. See the photo above. We also spent some time with her grandmother that night [see here].

For those who love the music of her grandmother, Dionne Warwick and cousin, Whitney Houston, Cheyenne hopes to carry that music on for many years to come.

As for acting, Ms. Elliott just wrapped a role in the movie Clinton Road starring Ice T, Vincent Pastore and Eric Roberts, which will be out later this year.

Cheyenne Elliott is ready to take the world by storm. She most certainly has the talent to do it.

You can listen to the entire CYInterview below and read the highlights:

“Our whole family is musical and to create three different, you know generations of more than that really, of just singers and artists and musicians and actresses I think is incredible. So I have a lot to live up to, but I love the challenge.”

She admits being from a family of music royalty has its benefits, however, Cheyenne knows she has to always be on her A game telling us:

“I get judged very quickly just because of the name. So I have to really show up and show out or else, you know, it’s not gonna work. So it really, there’s really two sides of it and you really kind of have to balance and figure out how to be able to be that strong person, but also prove yourself in a way that’s, you know, I am, I want to be the next one. So I want people to look at Cheyenne.”

Performing with her grandmother Dionne Warwick for many years, Cheyenne talks about what a mentor she’s been. Additionally, she revealed to us that her famous cousin, the late Whitney Houston, told her to keep singing, after getting to work with her on a song in the studio:

“I got sing the last note of the song, the last little riff and she was like, ‘That was amazing. She’s got it.’ And she heard me and she came up to me and I remember, I’ll never forget that and she said, ‘You have to keep singing.’ And I, that’s just my family saying it to me, but now when I look back on it and really understand who Whitney Houston was to the music industry, I’m like, wow. I have to keep singing.”

For Cheyenne, bringing music from the past and singing it in the present is very important to her telling us this:

“I really love that because I think music from over the years and over the decades is what real music is. And my grandmother has taught me what real music is, you know. So if I did anything other than that, it would just be a disappointment.”

As far as what we can expect from her upcoming music:

“I’m really trying to bring back those beautiful harmonies and melodies and we need bridges back in songs and we need just big vocals and I really want to, you know, bring that R&B diva pop soulness to my album. So that’s kind of what you’ll be expecting to hear.”