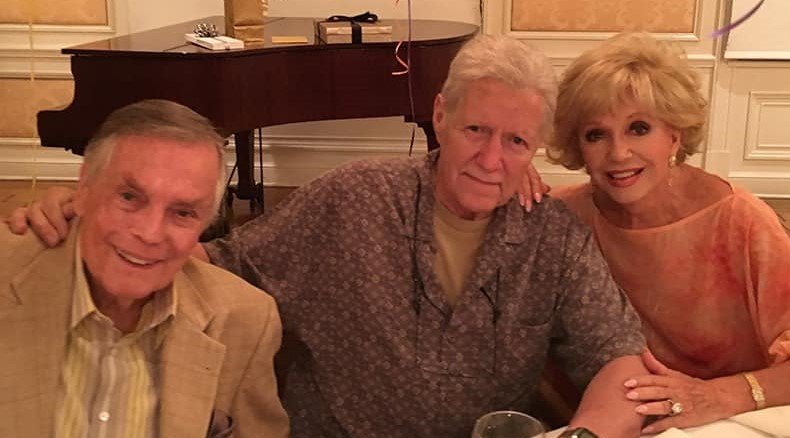 Earlier this week, the host of Jeopardy, show business legend Alex Trebek died. He turned 80 earlier this year. Mr. Trebek hosted the popular gameshow for more than 30 years. Almost everyone has seen the show at one time or another. For decades it has been a national institution. Certainly, we have all learned things from watching Jeopardy and marveled at the knowledge of its participants.

In the 1970s before his tenure on Jeopardy, Alex Trebek hosted another gameshow, High Rollers, with CYInterview friend, actress and fellow Hollywood legend, the great Ruta Lee. Working together on the NBC program would be the beginning of a more than 50 year friendship between the two. Ruta saw Mr. Trebek earlier this year and spoke with him a few weeks before his passing due to pancreatic cancer. On whom the world lost this week, Ruta Lee shared this with us:

“His gentleness and generosity was incredible and wonderful. And even more incredible than his generosity to me, was another sign of generosity and it was his wild and wicked and wonderful sense of humor. He was able because he was of Russian extraction basically, his father was Russian, he had heard accents all of his life specially growing up in part of Canada that was somewhat French Canada. He picked up accents and he could do every accent. And he used to do the East Indian accent so beautifully. So every story that he told and he was a better raconteur rather than a joke teller. He could throw in accents of every nation and it was just wonderful. I’m sorry that the world didn’t get to see some of that on their television screens every day.”

Ruta gave us some insight into how her friend, Alex Trebek dealt with his cancer challenge during the last year of his life:

“He was quite amazing. He sort of felt like I’m gonna work this as hard as I can and if I don’t make it, I don’t make it. But he had a very resilient kind of feeling and of course the part that we don’t always say he struggled, the pain was awful, the debilitating affects of his chemo were awful. For him to go to do, to tape a show and pull it together meant sometimes that he was bougie in the head, you know, and his body just didn’t want to get up and do whatever had to be done. So I give him lots and lots of credit for getting it together because he loved working and he wanted to keep working and in many ways I think it kept him alive. But stop and think about it gentlemen, he had like two years, more than most people get out of the diagnosis of pancreatic cancer. Usually it’s a month and you’re gone. And so he did very, very well and I salute his doctors and above all I salute him and boy do I salute his gorgeous wife.”

The beginning of Alex Trebek and Ruta Lee’s more than five decade friendship started when they worked together on the 1970s show High Rollers. The actress tells us what her time on the NBC show was like:

“I was thrilled to death to walk into NBC, you know, through the artists entrance and there on the big entry walls were the stars of all their shows and there was my picture along with Alex next door to Bob Hope and Johnny Carson. Wow, that was kind of a thrill for me, you know. … I would borrow people from the Tonight Show, which was next door to us, right across the hall and great stars would be appearing and I would grab people that I knew and prevail upon them to come on over to our set and say hello to our live audience and say hello to our film audience if the timing was right. And so that was, it was a very, very lovely part of my life even though I had gotten married and was living in Texas, I was commuting every week into Burbank, lovely downtown Burbank to film High Rollers. And to have that joyous experience with Alex every day and get paid at the end of the week was a dream, an absolute dream and I would wish it on myself again and again and again.”

Alex Trebek wrote the foreword to Ruta’s forthcoming memoir, Consider Your Ass Kissed. She shared with us what that meant to her:

“I am so grateful because the back leaf of the book is going to be a big picture of Alex and I together on High Rollers. So I just sort of feel like, it’s his loving tribute to our friendship, which he comments on about how he’s known me all these years. So he’s experienced some of the stories that I talk about in the book. So I’m so very happy. I sort of feel like an angel has blessed the book even though it’s a smartass title isn’t it.”

Featured columnist Jay Bildstein joins us for this CYInterview where he speaks with Ruta Lee about a variety of topics including how Hollywood and the world have changed.

Listen to the entire Ruta Lee CYInterview on YouTube: