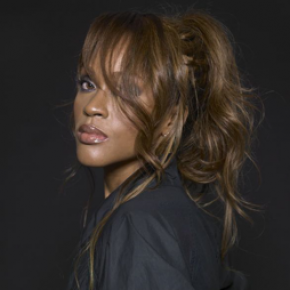 The last seven months have been an adventure for Shontelle Layne. This period has included a tour with New Kids On The Block and a duet with Akon for the movie Confessions of a Shopaholic. Now the 23-year-old singer-songwriter has been given the chance to tour with arguably the biggest female pop-star today, Beyonce Knowles.

Ms. Layne is committed to her fans. She interacts with them daily on Twitter, Facebook, and My Space. You can catch her updating her status numerous times a day and know exactly where she is and what she’s doing. You might even get a message from her yourself. Being there for her fans is important to her. Her hope is to make someone else’s day.

Shontelle says she still doesn’t care about being a famous person, something she told me in our last interview. Being a performer is just her job. Before she goes on tour later this week, Ms. Layne gives us a personal reflection of where she is now.

Listen to the Shontelle CYInterview:

Chris Yandek: At the end of 2008, you told me you didn’t care about being famous and all you wanted to do was make other people happy. Is that still true as your notoriety grows and more people want something from you?

Shontelle Layne: “Yeah. I guess I would say that’s still true cause for me, I guess there is two aspects of fame. The side that tells you that everything you’re putting your hard work into is paying off. And then there is the side that tells you ok, you’re famous, everyone loves you, and everywhere you go there is going to be cameras, lights, and you’re going to make a lot of money and all that stuff.

That side is not as important to me as the other side of it which tells me ok, you’re working, things are beginning to pay off and this is what life is about and this is what progress is about. I am not really interested in being a famous person so everyone knows who I am and all that stuff but I definitely want to be successful at what I do for sure.”

CY: Is there part of you that’s still glad you aren’t a huge sensation yet in America because you can still go most places, and people don’t recognize you for the most part, and you’re not hounded?

SL: “Yeah. Sometimes. I am like, thank God because I can still hop on a New York train. I can still ride the Metro North or the subway, walk into a store. They’re certain places I can’t go because of the type of people that are there pay attention to certain things and they know everybody. I can walk just into like Macys or run around in Times Square and look at tourists like everyone else and probably not get bothered which is cool. Because sometimes I feel really self conscious when if I got places with my family and friends and I can’t give them my attention because I have to give attention to everyone else and it feels bad sometimes.”

CY: Since the time I’ve gotten to know you, you’ve been on a whirlwind ride, but I think you’ve been continuing to evaluate what is really important and the things that really matter. I also believe you’ve felt like you’ve missed out on some things back home in Barbados. Besides that, what else has been difficult?

SL: “I guess other than missing out on everything that’s going on at home, you have to remind yourself you can’t be in the church and the chapel at the same time. This path that I’ve been on recently just has kind of been trying to stay focused on my goals and really making those happen. I don’t think I’ve been very unhappy, but there are days where maybe the workload feels like too much and you just wonder when are you gonna slow down and you really start.

Then you try to be realistic and you say wow! This is just the beginning. There is no slowing down. Then you kinda go into a meditation mode when you know you let all that settle and you’re fine again. Other than traveling, sleepless nights, I would say everything is pretty all right.”

SL: “Yeah. You get used to it after a while. You just kinda throw your watch away and say, ‘Hey man! What’s time?’ You lose all concept of time. Sometimes you feel a little disoriented, but that’s ok.”

CY: On one hand, people continually ask you about Rihanna and on the other side you are going on a phenomenal tour with Beyonce something that will be very helpful for your career, but you’re between two of the most worshipped stars. Do you ever feel boxed in?

SL: “Yeah. There are times when you feel boxed in. Even Ri isn’t the only person I’ve been compared to. I just am at that phase of my career right now where you’re new and there is this kind of intrigue and fascination, but there hasn’t been something that’s been yet where people really buy into you. It’s easy to break, but it’s not very easy to convince people that they should keep you around.

That first single that you put out, people like it. They’re not gonna really make an effort to find out who the person behind the song is because they’re like this could just be another song. So many songs come out. It’s like music is like fast food at this point. It’s just being pumped out of factories like faster than ever before. People aren’t interested in getting to know the artist until the artist can continue to fascinate them in some way. I guess that’s my task right now. Being compared to people like Rihanna and Beyonce is not that bad of a thing at all.

When you really think about it, they’re beautiful women, they’re very successful, and they continue to be successful despite whatever shortcomings, whatever ups and downs, they just seem to know how to stay on top. That’s something hopefully I’ll be able to do. I am really excited about going out with Beyonce for sure. If anyone has ever seen any of her shows that’s gonna be incredible. I actually had a dream last night I was hanging out with B and we were just talking and being girls. I can’t wait to go back out.”

CY: But that voice must go off inside your head, yes I am ok with them asking questions about other people, but come on, say something about me. Don’t you wanna know about me? That must go on in your head?

SL: “(Laughs.) Yeah. But luckily I haven’t encountered anyone who just focuses on that. They’ll talk about me and they say, ‘We have to do this. It’s our job. We gotta ask you this and we gotta ask you that,’ which I understand. I’ll let you do your job as long as you let me do mine, which is to tell you about me and give you some information so that you can get the information about me out there. I’ve been very lucky to not come across anyone who is less interested in my story or not interested at all luckily for me. Trust me, I would know what to do when I come across those people.”

CY: So going back to that dream, what is the one thing you most want to talk with her about [Beyonce]?

SL: “Funny thing is being on tour is work…work…work so who knows if that’s even going to happen. I would love to actually be able to meet her and be in the same space to really genuinely thank her and her team for the opportunity. It’s kinda like being co-signed by someone who’s already legendary. It feels good to the ego but it’s also – that was a gesture that touched me in a way like when at that point you may be questioning is this the right thing for me to do and are things moving the way they should be? Then something like that happens.

It’s almost like a message to the world in a sense. Yeah. You should pay attention because people like Beyonce don’t just put anyone on their tour. I would really love to just have that conversation with her and her entire team and telling them thanks for giving me that opportunity and I’m gonna do my best to make Sasha no less Fierce than she already is so that her fans when they come to experience her tour, the entire show is an experience they’ll remember from the opening act right until that last note that she sings. She already has to deal with the press bombarding her with so many questions so I am not interested in putting her in the hot seat to ask her anything much. I just want to show my gratitude really.”

You can keep up with Shontelle on Twitter at http://www.twitter.com/shontelle_layne

The tour dates are as followed: