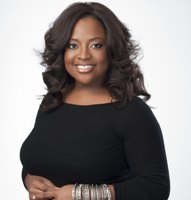 In 2007, prior to beginning her tenure as one of the personalities on The View, Sherri Shepherd spoke with me [here] about her prospects for joining the popular daytime television show. Now, four years later, Ms. Shepherd’s celebrity is bigger than ever, in large measure owing to The View, plus, on a personal note, she has found a new love.

Listen to the entire interview with Sherri Shepherd:

In this, latest CYInterview, Sherri talks about her life today as compared to four years ago.

“Life today, I guess I would describe it as, I am in a place of peace. Because back in 2007, it was a lot going on, I was battling for custody of my son, going through a very, very messy divorce… I’m in a pretty peaceful place and just grateful to be here. “

Besides being one of the ladies of The View, Ms. Shepherd has found happiness with her recent marriage to Lamar Sally. A TV special documenting her wedding experience titled Wedding Fabulous: Sherri Shepherd Gets Married airs Tuesday night on the Style Network. Sherri says she never expected to get remarried.

“No. I figured at some point it might happen, but I thought it would be when Jeffery was like in college and then I would get my life back. I did not know it would be now because I pretty much said, ‘You know what? My assignment right now is I’m a mother. I’m gonna raise my son and I’m gonna be content with that.’ And being a single mom, it’s just kind of you don’t trust too many people with your child.”

Looking at dating as a single mom, Ms. Shepherd shares some great insights for mothers on their own, who are concerned about introducing a new man into their children’s lives. Sherri says single mothers need to be open and take a chance when it comes to dating.

“I went ahead and introduced him to Jeffery pretty early on. Probably about five months into us dating and he knew that Jeffery, I was a package deal…It was always Jeffery can come too…He valued my son’s feelings. The day came to when my son said to me, ‘Mommy, I want Sal to take me to church. Not you. Only me and Sal.’ I knew ok, this is a good thing…I think you gotta look at a man. He’s got to value your child as much as you. That’s the thing I looked for…You have to be open with your heart…I think you gotta open up and take a chance…Nicey Nash this is my girlfriend, she has this saying that I love for single mothers and she says, ‘Date your priority and not your preference.’”

In Wedding Fabulous, one of the events of her documented wedding experience is receiving a higher than expected bill. Sherri notes that she made cuts to her wedding expenses. Even personalities of The View have wedding budgets.

“I started crying and if it wasn’t for those fake eyelashes, you could’ve seen the tears, my eyes watering up even when the camera turned off…I think with every bride you kind of, you have this dream that you want and you have this wish list and you get a designer who goes, ‘It’s my job to make it come true.’…We had to get rid of a lot of stuff so we could stay within budget.”

During the seasons Ms. Shepherd has been on The View, Sherri says the person she least expected to meet was President Obama. However, she dreamt that the President would meet her son Jeffery.

“Who would ever think they would actually meet the President? I’ve always had a dream of him holding my baby, you know. And I wanted to bring Jeffery the day he came. I wanted to bring Jeffery and they wouldn’t let us, the Secret Service and I told President Obama. And I said, ‘You know, they said no and I really wanted my son to meet you because there’s never been an African American in the office and this is history for me and for my baby.’ And he said to Elisabeth [Hasselbeck] and I, he said, ‘Bring them by the White House.’ I could’ve fell on the floor.”

As one of the leading African American women’s voices on daytime television, Ms. Shepherd understands the importance of her role. Additionally, she believes shows like the Jersey Shore and Basketball Wives show women behaving violently and, consequently, is part of the reason why bullying and violent behavior among young girls is an issue.

“I do believe it’s one of the causes because I think it’s teaching girls that you know what, when something doesn’t go your way or you’re having a conflict, pop somebody in the mouth and start fighting. I think these shows are just detrimental…Young girls watch this and they’re watching Snooki get hit in the club and they’re watching fighting and this is not good, not good if you’re trying to teach our girls how to have self esteem.”

Four years ago, Sherri Shepherd had a now famous discussion on The View in which she said she wasn’t sure if the world was round or flat. Ms. Shepherd later said she was nervous. She shared with me that she doesn’t regret anything she now says on The View.

“I don’t regret things anymore Chris…When you’re out there live, you don’t have a net. So, we tend to say things and say, ‘Oh my gosh, maybe I shouldn’t have said that.’ But you know what? Life goes on. And I think if people sit here on the show and they don’t like me, no matter what I say, they’re not gonna like me…Even when I said four years ago I didn’t know if the earth was round or flat because I got nervous and it was a brain fart. You know what I realized Chris? Life moves on. You get up, the world didn’t end, people still have to go to work, they’re still trying to find a job, they’re still trying to find their kids. Aint nobody worried about my little one comment…I learned you know you put a hard shell on when you leave the house and it will be alright.”

On Monday’s episode of The View, the shows regulars touched on the new book, Jacqueline Kennedy: Historic Conversations on Life with John F. Kennedy. It is based on interviews the former first lady gave. Media reports, claiming to garner their information from the book, have stated that she called Martin Luther King Jr. “terrible, tricky and a phony. “

Ms. Shepherd gives us her thoughts on the reported comments. She says that if all media reports are true, and presented in the proper context, it would be hard to swallow for the African American community.

“Look, I’m just as shocked as you are. We talked about it very briefly, it came up this morning and I was just shocked. I haven’t done the research. I haven’t read the book yet. I’m quite interested to find out why she would call Martin Luther King a phony. Was there something she knew that I didn’t know? I mean, I am really, really shocked. I see why she wanted this tape to wait 50 years after she died. I mean, had that come out then, I think it would’ve been a big mess…For a person you never thought…I think it would be kind of hard to swallow if Jackie Kennedy might’ve been racist.”

Finally, Sherri gives us her hopes for the future.

“I have a six-year-old son and I want to raise him up to be a confident, independent young man who makes a real big difference in this world.”

Photo credit is to ABC.

Wedding Fabulous: Sherri Shepherd Gets Married airs at 9:00 PM on Tuesday Night September 13th on the Style Network. You can find more information about the special clicking here.