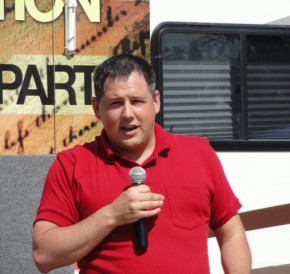 During the 2008 election season, Joseph Wurzelbacher, better known as “Joe the Plumber,” had an exchange with then Democratic presidential candidate, Barack Obama, about possible tax increases on small businesses. The exchange led to the famous spreading the wealth around quote from Obama, “I think when you spread the wealth around, it’s good for everybody.” The exchange made national news and gave Joe a platform from which to speak his mind. He went on to write a book and make speeches.

Fast forward about three years and some folks in the media are talking about Ryan Rhodes being a latter day “Joe the Plumber”. At an Iowa event last week, the founder of a Tea Party group in Iowa asked President Obama why Vice President Joe Biden called Tea Partiers in Congress terrorists, because of the stance they took during debt ceiling negotiations.

There have been conflicting reports in the media as to whether Vice President Biden actually used the word “terrorists.” In his exchange with Mr. Rhodes, President Obama stated that the Vice President said, “What he said was, is that for us to be willing to take the economy to the brink, was irresponsible.”

Whether the comparison to “Joe the Plumber” is apt is debatable. What is clear, however, is that Ryan Rhodes’s verbal exchange with the President demonstrated once again that in the United States of America, an individual can speak up and garner attention for their point of view.

You can listen to our close to 40 minute CYInterview with Ryan Rhodes below.

In speaking with myself and feature columnist Jay Bildstein, Mr. Rhodes reflects back on his exchange with President Obama at an Iowa rally.

At the end of 2007/beginning of 2008, Ryan Rhodes says he started saying there needed to be some changes in government. Mr. Rhodes tells us he ran for the Iowa State House as a college student in 2008. Running for public office was his second taste of the world of politics. He had already done an internship in Washington, D.C. After those experiences, Ryan ended up in the private sector:

“When I went and got a real job, I got a job at a car dealership and I was part of one of the Chrysler dealerships that got shut down by the Obama Administration. So then I went and sold radio and while I was selling radio, I heard from construction companies, plumbing companies, small businesses essentially that said to me, ‘If we hire, especially contractors, if cap and trade goes through, if some of these regulations go through, we’re gonna have to fire our employees and hire them as general contractors ‘cause the business, we can’t afford it.’

But as a family they could maybe buy one truck and one Prius and that would meet the gas mileage thing. So I’m hearing things like this from business which is when and after a while I decided that, I decided in 2010, which was later to actually decide to go work for a candidate, get into the political arena as more of a full time gig. But right now I do consulting, I do radio and advertising consulting for businesses as well as I do some political consulting.”

In the recent Iowa Straw Poll, Rhodes supported Michele Bachmann for the Republican Presidential Nomination. He says he has no idea what his future plans are, but that the Congresswoman’s people are welcome to invite him to be part of her campaign. In response to Michele Bachmann requesting federal aid numerous times for her district, some of which reportedly was from President Obama’s stimulus program, according to the Huffington Post, Mr. Rhodes says these are good questions to ask the congresswoman:

“I don’t know exactly what my next step will be and they’re more than welcome to invite me to be a part of their campaign, but I don’t know what I’m gonna do right now…Those are good questions to ask. What exactly are you? Are these needed funds for the area since the district is sending money out to Washington.”

Ryan agrees with my colleague Jay Bildstein’s 50 percent congressional, presidential and vice presidential salary cut proposal as a way for politicians to lead by example. As an Iowa Tea Party group founder, Rhodes said he would be willing to put everything on the table from military and defense budget cuts to social security and not just focus on certain areas of the government budget.

“If we’re gonna fix this, they’re gonna have to ask a lot of people to take some pretty tough cuts who are employees of the government and who are out there doing things and yeah, I think if they led by example and said, ‘Ok, not only are we gonna cut our pay, we’re gonna cut our pay more than we’re asking you to sacrifice and to do that I think would go a long ways to show people that this isn’t about attacking one group, this is about solving the problem…As long as it sticks to spending cuts and not increases, then yeah, I would put everything on the table.”