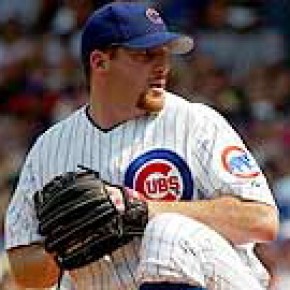 The 2006 Chicago Cubs come back into spring training with the big addition of Juan Pierre and a few others to help the team out. The last two seasons the Chicago Cubs just missed the playoffs in 2004 and under achieved with a 79-83 season in 2005. They also have had major pitching injuries that didn’t help the team’s morale. Ryan Dempster will take to the mound daily if needed in his first full year as the Chicago Cubs closer this upcoming 2006 season.

Listen to the Ryan Dempster CYInterview:

Ryan Dempster: “I am doing wonderful today. It’s photo day. I am happy to have my picture taken by 50 photographers.”

CY: How does it feel to be the Chicago Cubs closer and do you intend to be a closer the rest of your career?

RD: “As far as I see it right now, yeah. It feels great to go into the season when you have a role. You know what you have to do to prepare for opening day. It’s something I enjoy doing. Hopefully I can make a little career out of it. Hopefully do it for a long time for the Chicago Cubs.”

CY: What’s the most important thing you think you need to accomplish in spring training this year?

RD: “Stay healthy. I think we all know how to get ready. We have been doing this long enough. Just go out there and get your innings in and get your work in. I think if we can do that as individuals and especially as a team, we will be in a lot better position than we were last year at this time.”

CY: Is it tough to convert from a starting pitcher to a reliever and what is the difference?

RD: “Physically it’s a little bit of a change. You have to be ready to pitch every day. At the same time you aren’t throwing as many pitches or going as many innings. I think probably the biggest thing is staying focused. I used to have those four days off. I don’t get those anymore. It’s kind of like we are position players. If we have a bad day just like an outfielder or a first baseman has an 0-4, they get to come back the next day and perform. That’s the nice part about relieving.”

CY: Do you think the rotation and pitching in general has improved or can improve from last season?

RD: “I think obviously last year we had inconsistencies in the rotation just as far as injuries and guys going down. If we can get our starters to make all their starts and with all the additions in the bullpen we can have a chance to have a starting staff. We do every year especially when we have guys like Carlos Zambrano, Mark Prior, and Greg Maddux out there.”

CY: The Chicago Cubs added Juan Pierre, Jacque Jones, Scott Erye, Bob Howry, and a few others to the roster. How much do you think these new additions will help the team through the 2006 season?

RD: “I think a lot. I really do. I think you are talking about two relievers that had great seasons last year, are durable, and go out there and provide late inning help. They also have the ability to close games. That’s always a plus to have. Juan Pierre and Jacque Jones are two guys that play every day, work hard, and are consistent. I think getting a guy like Juan Pierre at the top of the lineup and putting him in front of guys like Derek Lee and Jacque Jones will hopefully pay huge dividends to have a guy like that on base. I know guys like that. I would rather face a big huge power hitter than pesky little lead off guys because they seem to drive you nuts all of the time.”

CY: What are your thoughts on playing for Chicago Cubs manager Dusty Baker and how much do you think he has to prove this year after the last two under achieving seasons?

RD: “Yeah. I don’t know. Last year was underachieving. I think a lot of that came with the fact we had injuries. Losing big players like that takes morale out of the team. It seemed like every time we got out of it someone else would get hurt. I don’t think Dusty has anything to prove. I think he has proven that over his career. We have to prove that we have the ability to stay healthy and go out and perform at the elite level. Between Dusty and his staff we are doing great. We just want to go out there and hopefully bring a World Series for those guys.”

CY: What did it feel like to be a MLB All Star for the Florida Marlins in 2000?

RD: “It was great. One of the best experiences of my career to be in the locker room with those guys and have the respect of your peers and be on the field. Not a lot of people get to say that were an All Star. That’s something I can always take away from this game, but at the same time it was my first one, but hopefully I can be back for many more.”

CY: How did you feel when you came in the year after the Florida Marlins split their whole 1997 World Series team?

RD: “I was in the minor leagues when they won. It was an opportunity for me. To say I was happy to see a dismantled team probably isn’t the right word, but excited because it gave me opportunities to get in there and pitch and help jump start my career. Obviously it was great for the state of Florida to win that World Series, but with them dismantling it, it gave me an opportunity to play.”

CY: Do you think the drug testing policy in baseball has gotten to where it needs to be to keep the sport pure and be tough on those that cheat?

RD: “Yeah. I think it is definitely going in all the right directions. The penalties are pretty stiff. I think they are doing everything they can. The players are taking the initiative that if they buy something over the counter to have it checked out first before they are taking it. Guys don’t want to be criticized in the public eye for doing these things. They are following all the guidelines. I think you will find in years gone that there are gonna be less guys guilty of taking a banned substance. This game is going to move on and be a very clean game again and all that stuff will be out of here.”

CY: Do you think the Chicago Cubs can make it back to the playoffs or even possibly go to the World Series with everything that has happened this off season?

RD: “Yeah. Absolutely. If I didn’t believe then I wouldn’t be assigned back here. I think Jim Hendry has done everything that is possible to go out there and try to make us a winner. I think he has room to make more moves if he has to. I think we the players realize what’s going on. It be a very exciting thing in the city of Chicago if we can win a World Series.”

CY: Finally, have your pre game rituals changed at all from being a starter to a closer?

RD: “Nah. Just the fact that I am getting ready every day. I do it once every day instead of every five days. Just making sure that I am staying ready and staying loose and preparing for the game.”