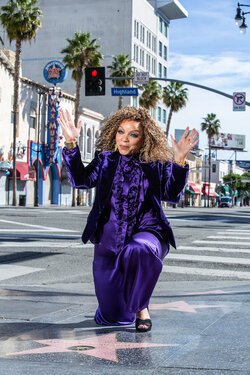 Over the last 24 hours, social media has had trending topics on the movie Coming 2 America. The Eddie Murphy film was released on Amazon Prime Video yesterday. Earlier this week, we shared information about dance and music icon Paula Abdul’s work on the first film in the franchise, Coming to America, which was released in 1988 [see here].

For the sequel, longtime Hollywood costume designer Ruth E. Carter was responsible for the wardrobes in Coming 2 America. Recently, she was honored with a star on the Hollywood Walk of Fame. She is only the second costume designer to receive this honor. The ceremony was attended by Eddie Murphy and Oprah Winfrey.

Other films Ms. Carter has worked on include Black Panther, Amistad, Malcolm X, Summer of Sam, How Stella Got Her Groove Back and Love & Basketball. In 2019, she won the Academy Award for Best Achievement in Costume Design for Black Panther.

Past CYInterview guest, actress Angela Bassett starred in Black Panther, Malcolm X and How Stella Got Her Groove Back. You can find our 2008 CYInterview with Ms. Bassett, who played Tina Turner in What’s Love Got to Do with It, by clicking here.

Another past CYInterview guest, Sanaa Lathan, shared her experiences with us about playing a female basketball player in Love & Basketball. That CYInterview took place in 2011. You can find it by clicking here.

In the history of Hollywood costume design, Ruth E. Carter’s resume is impressive. Her star on the Hollywood Walk of Fame is well deserved. We look forward to seeing what future movies she works on.