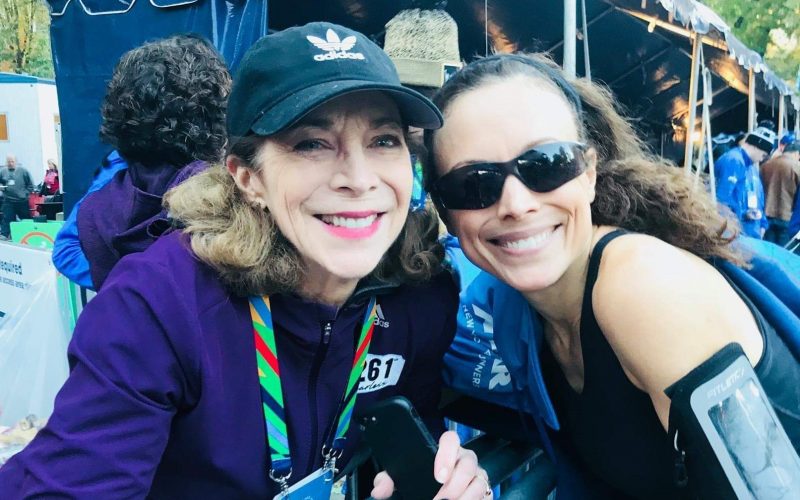 In her 2019 documentary film, The Human Race, Liz Vassey profiles a variety of runners with inspiring stories. One of those featured was famed marathoner Katherine Switzer. In 1967, Ms. Switzer became the first woman to run the Boston Marathon as a registered competitor.

Since working together on Ms. Vassey’s movie, the two have become friends. This has led to Liz getting an invite, via Katherine’s nonprofit organization, 261 Fearless, to run in this year’s Boston Marathon. 261 Fearless works to empower women through running. You can see a photograph of Liz and Katherine above.

After receiving the invite to the Boston Marathon, taking place on October 11th this year, the actress was tasked with raising $9000 for 261 Fearless. She achieved her goal in less than two weeks. You can still donate by clicking here.

Speaking about her invite to the Boston Marathon and Katherine Switzer, Liz Vassey said this:

“She’s a hero of mine as a runner, as a feminist, as a human. I mean, she was in my documentary and I just fell in love with her like everybody does. So I’m running for her charity 261 Fearless, which is named after her bib number 261 and it helps women by starting clubs and empowering women through running. And they have clubs all over the world, like 50 clubs on five continents.”

On following in Ms. Switzer’s footsteps in the Boston Marathon, she offered this:

“It’s incredibly surreal… She is a spectacular human being. I’m honored to call her my friend… If I had a brand, this would be it. So, I was all over it.”

Liz shared with us that she will not be reprising her role as Wendy Simms in CSI: Vegas. She said only a few of the original cast members are coming back for the reboot:

“I think every single other person in the cast, I’ll just be completely frank, I think we would have all been 100 percent open to it, particularly because Wally’s [Wallace Langham] on it, but I don’t think that was part of their plan because they want to reboot and use fresh blood, which I also understand.”

Who knows, perhaps owing to Ms. Vassey’s popularity, she will eventually be brought back to the CSI universe. Fans would appreciate seeing her reprise her role as Wendy Simms. We can only hope.

Featured columnist Jay Bildstein joins us for this CYInterview to talk about Liz’s training and preparation for the upcoming Boston Marathon, feminism and other topics.

You can donate to Liz Vassey for 261 Fearless on behalf her upcoming run in the Boston Marathon by clicking here.