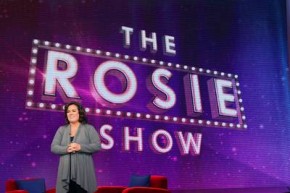 Today, Rosie O’Donnell begins her third run as a TV talk show host, this time on the Oprah Winfrey Network. In her first run in 1996 with The Rosie O’Donnell Show, she was proclaimed “The Queen of Nice”. The show won numerous Emmys and featured everyone from Hillary Clinton to Barbra Streisand to Tom Cruise. The show ended in 2002.

In 2006, Rosie came back to daytime television as the lead moderator for one season on ABC’s The View, where controversies and confrontations occurred. Now five years later, Ms. O’Donnell told CYInterview she is going to be herself this time around. She expressed this to me during her national media call last week. You can hear my entire conversation with Ms. O’Donnell below.

Listen to my conversation with Rosie O’Donnell:

Rosie agreed with me that The Rosie Show on OWN will provide a chance for her to finally be herself. She also agreed the show will have a more personal aspect regarding her interview subjects. There will not be celebrities stopping by promoting a movie, TV show or book and then just leaving.

First, Rosie reflects back on The Rosie O’Donell Show and how she use to be fascinated by celebrity culture:

“I totally do. I think you’re exactly right and that’s what I want to do on this program and that’s the goal when we started. I was 33 years old with a baby who was not yet walking and that kid is now 6’1 220 pounds and away at school. And I was fascinated by celebrity and pop culture and the concept that I could know people like Tom Cruise or Barbra Streisand seemed unreal to me. Now I had done movies with some famous people, but just to sort of casually know and befriend people who I did not work with and to be sort of part of that whole thing was intoxicating.”

Today, at 50, Ms. O’Donnell says she believes America is oversaturated with celebrity, pop culture. She has a different perspective on what she thinks matters and what will be featured on The Rosie Show. She wants to get down to things and have a more real conversation:

“But now at 50, I’ve lived in show business for more than half my life and I have a different take on it and what’s important and what I value and what I think needs to be shown to the American public and also what the American public seems hungry for. With the advent of the Internet, there’s such accessibility to celebrities and I think that we’re oversaturated with pop culture and with image and we really want some more of the gritty underbelly as opposed to the polish veneer. So that’s what we’re going for on this show. Just real conversation more in the style of Dick Cavett or Charlie Rose, but with humor than more than just like we’re out, here’s the clip and we’re done. I did that once and I’m ready for something else so you’re totally right about that.”

Photo credits are the Oprah Winfrey Network and John Kringas

You can find more about The Rosie Show that starts October 10th on The Oprah Winfrey Network at http://www.rosie.com.