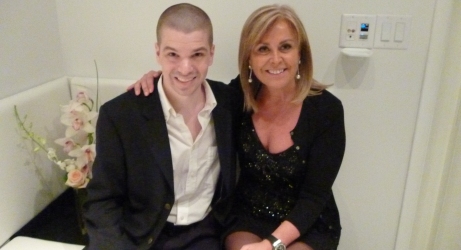 Last month we shared with you our report [see here] from international designer Rosa Clara’s store opening on Miracle Mile in Miami. With 140 stores worldwide, the designer from Spain has been building a fashion empire for the last 18 years focusing on bridal and party gowns. We had the pleasure of speaking with Rosa during her store opening back in March.

Please note that Ms. Clara was assisted by Mafe Quintero who interpreted the designer’s responses from Spanish into English for us.

Some have called Ms. Clara the Spanish Vera Wang. Her new store on Miami’s Miracle Mile is the first of its kind in America. Back in March she received The Best Designer Award at Miami Fashion Week. Rosa shared with us her thoughts on both subjects:

“They had actually a location open before where they had been selling to department stores, but for the first time opening their boutique here at Miracle Mile in Miami, she feels very proud and very confident that it’s gonna go extremely well. … For her, opening up the store in Miami, plus showing her new collection for 2014 in the U.S. as well as receiving this prize is for her a great dream come true. It’s almost as if you could say it’s the American dream.”

This time of year is considered wedding season for many. For the bride, the gown she wears will be one of the most memorable moments of her life. The designer tells us what makes a great bridal dress:

“She says the great difference between, for a great wedding dress is actually the fabrics. All of the fabrics are, everything is manufactured in Barcelona, but all of the fabrics come from all over Europe, especially Italy and Spain and that’s for her what makes a big difference in the quality of the dress as well as the price.”

Beyond her brand, Rosa Clara has collaborated with some of the world’s biggest designers including Karl Lagerfield. Lagerfield has worked with everyone from Madonna to Lady Gaga. In speaking about what her contributions to the fashion industry are, Ms. Clara told us this:

In focusing on one of the celebrity clients she has worked with, Rosa designed not one, but three wedding dresses for music star Paulina Rubio. The Spanish designer reflects back on working with Ms. Rubio who has sold a reported 20 million records across the world:

“She says that she was very proud to design Paulina Rubio’s three dresses actually. That you know probably, she thinks that Paulina’s a fantastic woman, a beautiful woman. The only inconvenience that she thought, she found with this was that she had to basically chase her around the world because it was during her tour when they were making the fittings for the dress and Paulina was actually not going to Spain. So that was a little bit of an inconvenience, but apart from that it was an incredible experience for her.”

You can find out more about Rosa Clara’s fashion at her official website here.