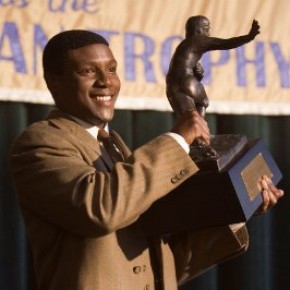 The Express is the ultimate role for Rob Brown. In 2000, the 24-year-old actor won the lead role across from veteran actor Sean Connery in Finding Forester. The movie received positive reviews, but Connery told the young actor to get an education. Brown stayed in Brooklyn, got that college education, but has continued to land movie roles along the way. The role of the first black Heisman Trophy winner Ernie Davis could only be topped by Michael Jordan for him. He’s still surprised he’s acting today.

Listen to the Rob Brown CYInterview:

Chris Yandek: I really can’t believe it has been eight years since you starred alongside Sean Connery in Finding Forrester. Are you still amazed that you came to audition as an extra and got the leading role across from a Hollywood legend?

Rob: Brown: “ Well, yeah, I was always amazed by that. I am eight times as amazed that I am here now.”

CY: Why do you think you’re still amazed to still be here in Hollywood doing this stuff now?

RB: “I think I am still amazed because in large part due to the fact I am not in Hollywood. I still live in Brooklyn and I think that keeps me away from being jaded because everything is a surprise to me. I was just reading USA Today, reading about [Mario] Chalmers and [Darnell] Arthur and their deal at the symposium, and above it there is this Express promotion, and I am like oh man, that’s me. Things like that keep me grounded and it keeps that passion going whenever I work.”

RB: “Hard to take in a sense that you work on something for so long then a year later it comes out and you’re like wow! I did that. When you’re in it you kind of look at it sometimes as though it’s work and it’s like ok, I gotta get this scene done and what do I need to do this, that, and the other. Then like a year later you’re like wow! I had a part in that. It’s such a collaborative effort. You think of all the work, all the camera people down to craft service and catering all the way up to the top with the producers and studio executives. It’s all that work, it comes together, and it is especially special when the work turns out good which The Express has.”

CY: How is The Express different than all these other football movies we’ve seen in recent years?

RB: “I think the magnitude of it is a lot larger than some films in recent years. You gotta start somewhere. Ernie Davis is the first black Heisman winner. In a lot of ways he laid the groundwork for people like me to play college football freely and have the opportunity to win a Heisman Trophy. I am not saying I had the opportunity. I just went and played D3 ball, but for guys like Troy Smith and Eddie George and people like them. It’s just groundbreaking material that we’re dealing with here that Ernie Davis was the first one to do it.”

CY: Is this really the ultimate role for you?

RB: “Absolutely. Short of I guess a Michael Jordan script came out and I got to play Michael Jordan. That be incomparable. The first black Heisman winner, National Championship, what more could I ask for? Of course this is a dream role and I love football. Now here I am engrossed in all this football and I get to go to games and stuff. I am just ecstatic.”

CY: But even though it being Ernie Davis, was it hard playing this role knowing the end result?

RB: “Well, it was hard playing Ernie Davis, but not for that reason. The Express is about the Ernie Davis story and it’s about his life. We wanted to get that across. This is about Ernie’s life and not about his death. It was difficult playing him knowing there was certain amount of responsibility that I had to him, his family, Syracuse, to Cleveland’s organization, to a lot of people I felt I couldn’t let down. I hope I didn’t.”

CY: Talking about the responsibility to his friends to his family to Syracuse University, whom did you get to speak with while preparing for this role?

CY: You didn’t talk with anybody from his past?

RB: “No one. I briefly spoke with Jim Brown and he was the authority. Jim Brown speaks to Gary Fleder, our director pretty regularly. One, I didn’t want to bother Jim Brown, alright? It’s Jim Brown. He plays golf. I don’t want to bother him. Number two, I felt as though if anything was wrong, it’s Jim Brown, he’d definitely echo it. He has a quick tongue and he’s not about to shut his mouth for anyone. I would’ve heard about it from Gary or through Gary from him. If there wasn’t anything that he had to say then I just had the freedom to basically do what I wanted.”

CY: Then what is your final conclusion of Ernie Davis after you’ve finished this movie?

RB: “In my opinion he was a saint and that’s not the direction we go in entirely in the film, but we also wanted to find out what also drove Ernie and what motivated him to act and circumvent all the obstacles he went through. I was under the impression that he was an absolute saint, that he was the perfect guy who tragically passed away too early for everyone.”

CY: In between the movies you’ve done over the last eight years, you went to high school, you went to college and played football as well. Why was it important for you to have a normal childhood life even through all the fame?

RB: “Just to stay grounded. I treated my first film as if it would be my last film. The plan didn’t change since I was a kid. The plan was to go to school, get your degree, and then figure it out after then. Finding Forrester was more like finding a happy bump in the road so to speak. It was more like that was fun, that’s cool, now let me go and get my degree. With great representation and being blessed with certain opportunities then of course some of the responsibility falls on me to book work. I have been able to do that and keep my feet wet so to speak while I’ve been juggling my school career.”

CY: Why do you think the chemistry was so great between you and Sean Connery in Finding Forrester?

RB: “Honestly, I owe him a call back. He called me I believe Sunday and I still have to call him back. It’s crazy that I have to call Sean Connery back. That’s the type of guy he was. That’s the type of guy he is. He sat me down and he made it a point to say, ‘No one told me this when I was coming up so I am going to tell you.’ One of those things that he told me was to finish my education and get my degree because that’s something he never did. That’s another reason I didn’t just up and leave and go to L.A. and try to just make it because Sean Connery told me not to. He told me the movies will come. Get your education and I feel as though that’s why we had so much chemistry because, you know, it was largely on him. I was just a kid. I figured I could do no wrong. They’ll just tell me if I am doing wrong, which is what happened. I just did whatever I wanted till they said no. And you know, I had all the confidence in the world because Sean basically had to approve me. Upon getting his approval, his overwhelming approval, then, you know, how could we not then have any chemistry? Then we just show up to work and have fun.”
CY: Finally, what’s one thing that we should know about you that we don’t?

RB: “I kind of like my anonymity. I like being mysterious. The thing is I don’t know why anybody does know about me. This is kind of weird. I love animated films. When Shrek came out, I was one of those lunatics. The Incredibles, that’s my joint right there. I saw Happy Feet like three times. That’s what people don’t know. I saw Happy Feet three times in the theaters.”

You can catch Rob Brown alongside Dennis Quaid in The Express in theaters nationwide October 10th.

You can find more at http://www.theexpressmovie.com/