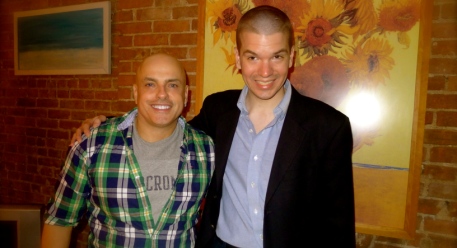 Soon enough, everyone in Hollywood will know the name Angelo Guglielmo. The success of his television documentary and book, entitled, The Woman Who Wasn’t There has brought the author, director and producer mainstream recognition. Millions have now seen his documentary on the woman who pretended to be a 9/11 survivor. The story is now on the road to being made into a feature film. The Woman Who Wasn’t There is also in consideration to be nominated for this year’s primetime Emmy Awards.

As a creative professional who works behind the camera, Angelo has found his own way to show compelling pieces of the human experience. He is a superb documentary filmmaker. Now, he desires to move beyond documentaries into that very competitive arena known as Hollywood. Currently, he is focusing on succeeding in feature films.

We spoke with Angelo at his apartment in Manhattan during our recent trip to New York. To learn more about him, you can read the highlights and listen to the entire CYInterview below:

Speaking about why he wanted to put together projects as a director and producer, Angelo Guglielmo tells us this:

“I always felt like I had a lot of stories to tell and documentaries are a great, great medium for visual storytelling and real stories about the human condition and, of course, now as I’m branching out into narrative feature filmmaking, the documentary medium provides a great, great avenue to develop stories for screenplays. … I don’t really think I’ll be doing a lot more documentaries just because I want to work with actors and I want to have a broader sort of canvas to paint on. … I would love to do a comedy, of course, because my subjects have been serious so far and I would love to do a thriller, a horror film.”

Angelo’s rise to recognition came with his project, The Woman Who Wasn’t There. The documentary was shown last year on the cable channel, Investigation Discovery. The story is about a woman named Tania Head who claimed to be in the Twin Towers on September 11th. Later, she was found not to have been there. Her entire story was made up. For those not familiar with the film or book, Angelo provides us with a synopsis:

“The Woman Who Wasn’t There is a psychological suspense drama about the World Trade Center Survivor’s Network and their former president Tania Head. Now Tania was history’s most prominent 9/11 survivor. She had escaped the unimaginable on September 11th. She had lost her husband, she sustained life altering injuries and you know her suffering was epic in scale. The fact that she had walked out of the towers was a miracle. She approached me, we became good friends. She asked me to do a documentary based on her group. Once we started filming, we realized that she was never in the Twin Towers on September 11th.

She never had a husband named Dave. She never worked for Merrill Lynch. Her entire biography was a compete fabrication. … I learned that insufferably optimistic about people, you know to have a woman sit in front of my camera and not know that she was telling the truth the entire time. To really just hear this story and believe every word of it and not be able to detect that her story was a complete lie really made me think about, you know, how much I believe in people and how the wall between the interviewer and the subject was absent.”

The documentary was produced by Meredith Vieira Productions. Many will recall Ms. Vieira’s work as a host and journalist on The View, The Today Show and 60 Minutes. Angelo says the story of The Woman Who Wasn’t There is now in the process of being made into a feature film. He is currently working on the project with writer and producer Terence Winter. Mr. Winter wrote the screenplay for the upcoming Martin Scorsese film The Wolf of Wall Street. That Scorsese movie has a star studded cast including Leonardo DiCaprio, Matthew McConaughey, Rob Reiner and Jonah Hill.

“Terence Winter, the show runner and creator of Boardwalk Empire and his lovely wife Rachel Winter came to me and they loved the story. So they decided that they wanted to do a feature film version, a narrative feature film version based on the documentary and the book that I authored with Robin Gabey Fisher. So we went into discussions, we broke down the story and we are in the process of creating The Woman Who Wasn’t There as a narrative feature film. … I would love for Claire Daines to play the title role. I would love for Michelle Williams to play the title role. I would love for Scarlett Johansson to play the title role. I think you know the transformation of these very beautiful women into someone who could be part humanitarian and somebody who had a dark, diabolical side I think is fascinating.”

If as if a future feature film for The Woman Who Wasn’t There was not enough, the documentary is also in consideration to be nominated at the upcoming Primetime Emmy Awards:

“I was very flattered because the network [Investigation Discovery] came to me and they wanted to submit it for Emmy consideration. I was flattered that they believed in the project so much. Henry Schleiff and Debbie Gottschalk and Amy Rapp and Meredith Vieira, of course, and everyone who helped me on this film were instrumental in its success and the fact that the network was so enthusiastic about the project was a very, very, you know was the highlight of my career.”

Aside from his work in show business, Angelo claims to be a celebrity party crasher. He tells us one story in which he says he crashed a Madonna party many years ago:

“Well, you know I got off the subway one night and I was passing Roseland on West 52nd street and I saw a mob scene. I mean the line was around the block and I remember they had been waiting out there for days and it was Madonna was releasing a CD and this was the launch party. They were gonna do a live concert performance on everyone’s cell phone, Verizon was sponsoring it, there were you know lines around the block and I just at that moment just said, ‘I wanted to go.’ So I walked right up to the front and I just stared at the guy with the wristbands and then there were three other groupies next to me that were doing the same exact thing.

Now, apparently he had a stack of wristbands but Madonna, they were for Madonna’s guests. He was personally assigned to help Madonna’s guests get in. They went to the wrong door. They went to the door around the block and he got screamed at. So here he was with like 50 wristbands and here were four you know people just staring at him like a lost puppy and he looked like he just had gotten beaten up because he had just gotten screamed at by Madonna and her team and he just came over to us and said, ‘Put out your hands.’ And he badges us all up, and we thanked him and we ran right in. We even got commemorative posters and a bag of swag. So I mean you know the night wasn’t all bad.”

It’s only a matter of time until the author, director and producer gets invited to the big events like the Oscars and Emmys and the party scene that goes with it. But for now, he says he does not make any apologies for his party crashing behavior:

“Who cares if one other person is there, I mean, really you know. And you know I’m such a great addition to any party, so what the heck. I mean it’s, it really just comes from a desire. I just love people. So I, you know if there’s a party, sure. I’m there.”

The Woman Who Wasn’t There is now available on Netflix. You can also purchase and watch the film here.

The Woman Who Wasn’t There is on Facebook here.

One Reply to “Rising Star, Writer/Director/Producer Angelo Guglielmo Talks: Shifting From Documentaries to Feature Films; His Acclaimed Documentary Film/Book, The Woman Who Wasn’t There and Party Crashing”