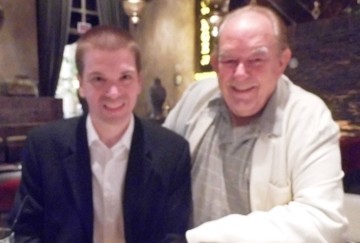 This week, TV personality and journalist Robin Leach passed away at the age of 76. Best known for hosting the television show Lifestyles of The Rich and Famous from 1984 to 1995, Robin took us inside the homes of some of the ostensibly wealthiest people in the world and even, on a given occasion, to see the treasures of the Vatican.

In recent years, Robin spent his time covering the celebrity and entertainment scene in Las Vegas, for the Las Vegas Sun and Las Vegas Review Journal. Around the city, Robin was treated with respect and admiration by the entertainment community. Mr. Leach always had something positive to say about the Entertainment Capital of World.

In May of 2016, I met Robin for an in person CYInterview segment [see here] inside the Lavo Italian Restaurant & Lounge at the Venetian, on the Las Vegas Strip. You can see our photo from that day. At the time, Robin, told me this about Lifestyles and the Rich Famous, the TV show that put him on the map:

“It was an inspirational show and you know, yes it had the fluff of me jumping into a Jacuzzi dressed in a tuxedo. Yes, it had the fluff of me drinking large quantities of champagne and partying with the rich and famous and having tuxedo waiters ski down mountains to deliver buckets of caviar to somebody. All those things happened. All of those things were very real. But, woven through the interviews was the message that if you work hard, you will be rewarded if you work hard, if you get off your backside and pull up your socks and you set a goal, set a target, you can achieve it.”

With a background in covering everything luxury, Las Vegas made sense for the man whose famous catch phrase was, “Champagne wishes and caviar dreams.” Las Vegas has become the luxury goods shopping capital of the world, surpassing New York and Los Angeles. Robin explained why back in 2016:

“The reason is, is that we have such a concentration of luxury goods stores in three miles of the [Las Vegas] Strip and retail sales have just about equaled to gaming revenues. Gaming revenues have slid down to 39, 40 percent of the revenues of hotels and casinos in this city. So the remaining 60 percent is now made up of shopping, purchases at retail, restaurant business and tourism attractions. So, yes, retail shopping has become far more important to this city and has a bigger bottom line than New York or Los Angeles.”

On Friday evening August 24th, the Palms Hotel and Casino featured a billboard paying tribute to Robin Leach. Other hotels paid tribute to him as well. You can see that below.

Our prayers and condolences go out to Robin’s family and friends. Those interested in reading and listening to our three CYInterviews with him can find them by clicking here, here and here. Robin Leach always had something interesting to say and will no doubt be missed by many, including those of us at CYInterview.