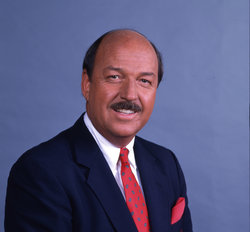 CYInterview would like to extend its condolences to the family of “Mean” Gene Okerlund and the entire pro wrestling community for the loss of this great broadcasting legend. Mr. Okerlund’s contributions to the pro wrestling/sports entertainment field will long be remembered.

My passion for interviewing people began as a teenager, with my love of professional wrestling. After having a phone interview with the late, great pro wrestling manager Bobby “The Brain” Heenan [see here], I asked him if he could put me in touch with his longtime wrestling friend “Mean” Gene Okerlund. I had always wanted to speak with Gene. Arguably, he is the best backstage interviewer in pro wrestling history. Many will remember his legendary interview segments with the likes of Ric Flair, “Macho Man” Randy Savage [see here], Roddy Piper [see here], Jake Roberts [see here] and Hulk Hogan among others. Bobby was kind enough to give me Gene’s number.

During a chat in 2002 – I was 16 at the time – I asked Gene about being with both the WWE and WCW. At the time “Mean” Gene had already been in the business for over 30 years. We also spoke about why the WCW failed, some of the hot topics surrounding Steve Austin, Hulk Hogan and a 9/11 WWE controversy. Gene also shared some life reflections on his long career in the WWE, how he ended up hosting a WWE program called WWE Confidential and his Mean Gene Burgers food franchise.

Gene Okerlund reportedly had two kidney transplants during his life, one in 1995 and one in 2004. His cause of death has not yet been reported. He was 76. Daryl Dragon, best known as the “Captain” from the Captain and Tennille, died yesterday as well, at 76. His cause of death was reported as kidney failure. You can see our tribute to “Captain” Daryl Dragon clicking here.

There is no denying “Mean” Gene Okerlund loved professional wrestling. He will no doubt be missed. He most certainly deserves a ten ring bell salute.

You can hear that entire segment below:

Special thanks to Joe Villa at the WWE for this photo of “Mean” Gene Okerlund above.