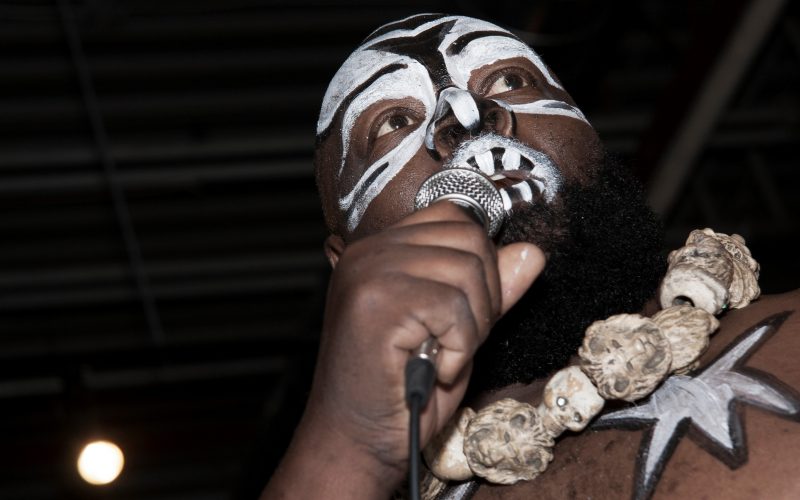 Earlier this month, James Harris, better known to the world as the famous professional wrestler “The Ugandan Giant” Kamala died, age 70. According to the NY Times, Mr. Harris’s wife Jean Bradley Harris says her husband’s passing was due to Covid-19.

During his pro wrestling career in the WWE, WCW, Memphis Wrestling and Mid South Wrestling, among other organizations, Kamala – usually playing the role of a bad guy – wrestled the greats of his era, including: Hulk Hogan, Bruiser Brody and Andre the Giant.

Though originally from Mississippi, many believed Mr. Harris was really from Uganda. In 2002, I interviewed James Harris about his life as a famous heel. It was actually Jerry “The King” Lawler who came up with his wrestling character’s name, Kamala. Almost two decades ago, James told me this:

Though he might not have been originally from Uganda, James Harris wrestled in Africa prior to his days in the WWE. That is when he started wearing the makeup, which he made famous. He told me what that was like:

“Wrestling there was kind of like in England. We would wrestle by round, like three minute rounds, but like boxing. And that’s the way it was there. And for the people and everything, they were the same as they were here. I was surprised. … You have big crowds. It was real good. I enjoyed it.”

On whether or not his fellow pro wrestlers liked his character:

Speaking of money, during our interview, 18 years ago, as well as with other journalists after that, Mr. Harris was always candid. He stated that he felt he was not fairly compensated for his work as Kamala. His main gripes were with Vince McMahon and the WWE. In our 2002 chat, he summed up his time in the big leagues with these words:

During my time interviewing professional wrestlers, James Harris was one of a handful of larger than life figures, who I got to know on a more personal level. He was a kind man who was always trying to do something positive.

Aside from this interview, Kamala was also the first guest on an online wrestling radio show I hosted called New Era of Wrestling, that took place as part of the Weblink Radio Network on the chat platform Paltalk. The show was coordinated/produced by our own featured columnist Jay Bildstein.

In 2015, Kamala released his book titled Kamala Speaks, with co-author Kenny Casanova. A special thanks to Mr. Casanova who provided the photos for this piece. A website for the book was created at www.kamalaspeaks.com. Additionally, there is an official fan page for Kamala on Facebook, which you can find by clicking here.

CYInterview would like to offer its condolences to James Harris’s wife, Jean Bradley Harris, as well as the rest of his family. This kindhearted giant will no doubt be missed. The former pro wrestler shuffled off this mortal coil on August 9th.

You can listen to the entire 2002 interview below. In it, Kamala shares stories about Hulk Hogan, Andre The Giant, Vince McMahon and Gorilla Monsoon.

Listen to the 2002 Kamala Interview: