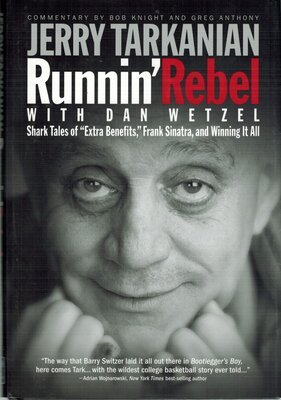 CYInterview would like to extend its condolences to the family and friends of late college basketball coach Jimmy Tarkanian. The coaching legend, best known as the head coach of the UNLV Rebels from 1973-1992, passed away earlier this week. He was 84 years old.

Arguably, Coach Tarkanian was the most accomplished sports figure in Las Vegas history. After retiring, he made his home in Las Vegas where he was the head coach at UNLV for 20 seasons.

In 2006, I was honored to speak with the Jerry Tarkanian about his coaching career, while he was promoting his book Runnin’ Rebel: Shark Tales of “Extra Benefits,” Frank Sinatra, and Winning It All.

You can read the transcript and listen to the entire CYInterview below:

CYInterview conducted in January of 2006:

For close to 40 years he coached basketball and loved every minute of it. In 1990 he lead his UNLV Rebels team to a national championship. His new book Jerry Tarkanian, Runnin’ Rebel shares the story of his entire coaching career and what he went through as a coach with his battles with the NCAA.

Listen to the Jerry Tarkanian interview:

Chris Yandek: What do you want people to take away from reading this book?

Jerry Tarkanian: “I just want them to enjoy it. I want them to really enjoy it. You know, I told a lot of things that coaches sometimes don’t talk about, but I got into recruiting. I got into players that we lost, kids that we thought we had and then we lost. I got into building the program here in Las Vegas and in Long Beach and some of the hard times that we had. But I got a little bit into the NCAA. Not a lot. Just a little bit.”

CY: Are you surprised that you aren’t in the College Basketball Hall of Fame with all that you’ve accomplished?

JT: “Well, you know I realize that my battles with the NCAA have hurt me there. The NCAA is just a powerful organization and they control the media. They’ve projected some things about me that were totally inaccurate. I got a big 2.5 million dollar lawsuit settlement from them, but the media never, hardly mentioned that. All they did was talk about was all the insinuations that they made. They never talked about the fact that I won my lawsuit and they had to pay me a 2.5 million dollar lawsuit. That was pushed back to the back pages and hardly anything was ever said on that.”

CY: Well, from 1968 to 1973 you were the head coach at Long Beach State and took the school to four NCAA tournaments. Anything that stands out while you were there?

JT: “Well, I was a California guy. I was primarily raised in Pasadena and I coached seven years in the California junior colleges. Long Beach was relatively a new university. It was attractive to me. It was a great location. We lived in Huntington Beach. It was great for my family and we built a program from scratch. They were Division Two before I went there. It was a relative new university. It was commuter college. We didn’t have any money. We didn’t have a lot of alums. We built it with all junior college players and then we were able to get a great player in Eddie Ratliff. We became a national power which was really a miracle I think because if you looked at what we had, we didn’t having anything. I put that in the book there. We didn’t have any money. Our recruiting budget came from our basketball camp. We used our own camp money. In fact it came from, it was money that ordinarily goes to coaches. We used that for recruiting.”

CY: Well, from 1973 to 1992 obviously you were with UNLV. Why do you think you were so successful there for those 20 years that included going to numerous final fours?

JT: “It was a great community. People now are all flocking to Vegas. They got 1.6 million people living here. You talk to anybody here they will tell you the best times were before all these people came. I went there in 73, we had 300,000 people. It was just a great community to live in. It was the best time. You couldn’t believe how wonderful living there was at that, during that period of time. Now, I still live there now, but the traffic is so bad. You can’t get around. We got from one side of town to the other in 15 minutes. It was great. At that time too. Right now there’s some economic opportunity in Las Vegas, but the traffic is so bad. I mean, God, we use to get anywhere from one end of the town to the other in 15 minutes. Now it takes you 15 minutes to get out of your driveway. It’s incredible.”

CY: What do you remember most about your 1990 UNLV Rebels team that won that national championship for you? What was the moment for you to finally win it?

CY: Well, can you talk about the 2.5 million dollar lawsuit against the NCAA just in a brief summary? What exactly happened?

JT: “Well, you know, they just made up allegations against me with no basis whatsoever and I never had a fair hearing. I absolutely never had a fair hearing. … They had no evidence of any kind. They would just come out and make an allegation and the committee would go along with it. When we went to court, my attorney told me, he said we’ll kill them when we go to court. No court in America is going to put up with this. We killed them when we got to court. They settled so the filed things didn’t come out, but we got a 2.5 million dollar settlement from them. The thing was that we got beat up in the media going into that. All through the years we got beat up with their insinuations and allegations, but then when we won the lawsuit to prove those were false, nobody printed that. I mean, you hardly ever read about that.”

CY: In the 1977 NCAA semifinal you faced Dean Smith. You gets were up by a lot against North Carolina, but they came back to win the game. Were you guys just out coached in that game?

JT: “It was always special because I love the people in Fresno. The coaching here was hard, but the people were absolutely wonderful. They were starved for a good program and their support was great. We were the only school on the West Coast I think that charted to all of our away games. We were only able to do that because we had so many fans that went with the team. They paid for the airfare of the team. So we were able to charter to all our games. I don’t know anybody on the West Coast that did that.”

CY: Your overall record of course was 988 wins and 228 loses. Did you ever think about going for that win at number 1000 before retiring?

JT: “I never think about things like that. I just try to win the next game. I didn’t even know what the record was.”

CY: Why do you think you had such a tough relationship with the NCAA while being a college coach? Did you ever think there was a reason why they always picked on you?

JT: “I tell it in the bookk. I wrote a couple of articles defending Western Kentuck and Centenary College and they came after me. When they came after me I thought what they did wasn’t true, wasn’t right. So I battled them for it and they just kept coming, they kept coming. They never got me fired. Normally when you fight the NCAA you get fired immediately. I never got fired so they just kept coming. In fact, Dale Brown and myself are the only two coaches whoever fought the NCAA that didn’t get fired immediately.”

CY: Do you regret going to the NBA because you weren’t successful?

CY: Who was the best player you think you ever coached or could you name a few at least?

JT: “Larry Johnson was the one who contributed the most because he was such a great person on and off the court. Not only did we benefit from it on the court, but he was even better off the court. I had so many great players that I don’t want to single anyone out.”

CY: Well, who was the toughest coach you think you ever faced?

JT: “There are just so many good coaches. I don’t know. It’s hard to pick one out. The coaches in our league, I thought Boyd Grant and Jerry Pitt were two of the best coaches I ever coached against.”

JT: “Well, we didn’t allow anybody to gamble. I didn’t care if you went down to the strip. That was fine. But we didn’t want anyone gambling. If any of our players did, we would know about it in minutes because everybody was a Rebels fan. We only had one player that got involved in that. That was I think in 1978. He was going to be our captain or 79 and We dropped him from our team and never had another problem.”

CY: Was UNLV different than any of your coaching stops because of things like that?

CY: Tell me about your friendship with Frank Sinatra overall.

JT: “He was doing a fundraiser for the university every year. In one night he would make $100,000. When he came he and I got to be friends. Whenever he’e come to town to entertain he would take me and my wife to dinner. He never came to a game. He kept saying he was gonna come. We’d have everything setup and for one reason or another he wouldn’t come. When we won the national championship the first phone call my wife got in her hotel room was from Frank Sinatra congratulating us.”

CY: One of your habits was chewing on a towel. How did that all come about?

CY: Finally, what’s in store for your future?

JT: “Well, I’m retired. I got several radio shows, but I am totally retired. I’ve been out to the pasture. I am enjoying myself.”