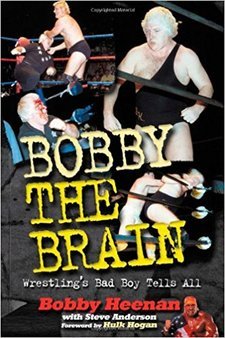 It was 2002 and Bobby “The Brain” Heenan had just been featured on the WWE Confidential TV program about his battle with throat cancer. After the airing of the segment, I spoke with Bobby by phone, a few days later, about the cancer treatment he underwent, as well as other topics. It would be the second of probably 10 so times that I would have the good fortune of speaking with him over the last 15 years.

Earlier this week, it was reported that complications stemming from throat cancer led to Mr. Heenan’s passing. He was 73 years old.

Bobby was the type of person that if you called him and had an audience, he would be happy to make time. Whether that audience was 100 people or one million, he was always a man willing to give of himself. He loved the pro wrestling business and he loved talking about it.

In 2002, just after WWE’s purchase of its competition, the WCW, Heenan was candid about the downfall of professional wrestling and how reality TV and other things were negatively impacting ratings. Additionally, he spoke out about his dislike for the product WWE was putting out at the time.

The coversation you will hear took place just before the release of his 2002 book Bobby The Brain: Wrestling’s Bad Boy Tells All. There were stories about “Mean Gene” Okerlund, Gorilla Monsoon, Andre the Giant and his thoughts at the time again on why the WWE was going in the wrong direction.

Few people in the wrestling business were nicer than Bobby “The Brain” Heenan and many others will miss him and his wit. He was a man who no doubt was one of the best managers in the business’s history.