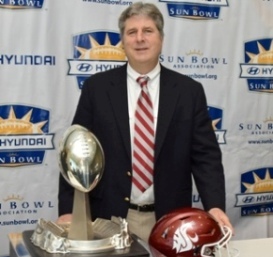 Today, we continued revisiting our CYInterviews with frequent guest, college football head coach, the late, great Mike Leach. The CYInterview was conducted in November of 2012 before the Apple Cup.

You can find the write up and listen to the entire CYInterview below:

Focusing on the game between Washington and Washington State, Coach Leach said there are a lot of players on both teams who know each other well, as they played and grew up together. Though some believe winning a rivalry game can make up for a bad season, Mike does not believe that. The Washington vs. Washington State game will be broadcast nationally on TV on Fox this Friday at 3:30 PM EST.

“As a team, typically, there are deals where you know each other well. In our case, the guys from Washington all went to high school with one another, but both schools recruit Southern California heavily, so the Southern California kids on both teams typically know each other and know of each other. So I think that plays into it. … I think seasons are just a series of increments of work and improvement and I think you just keep building on it. You just do the best you can. I mean, you wanna win it and then obviously it will help springboard your way into offseason. But you know the most important thing is just to worry about being the best team you can be and go out and develop your skills, have a great week of practice and then do it on Saturday or in our case Friday.”

The first year on the job as head coach of Washington State will end up yielding Mike Leach his first losing season of his college coaching career. With a record of 2-9, with eight straight losses, he analyzes where his team is:

“I just focus on whether we’re doing the best we can and whether we’re improving at the rate we can. All that starts out with great effort, you know we’ve got a lot of young players. Our freshman, we’ve got 15 freshman playing. Most teams have zero to three. We have 15. And so I think that they’re getting, while they have huge upside they’re gonna improve and keep improving and I think they’ve improved throughout this year. … We’ve gotta steadily just understand that our best efforts, our best technique and things are gonna put us in the best position. But some of it, you know obviously some of it’s a learning curve and you just have to keep learning and keep working.”

Earlier this month, Washington State’s star wide receiver, Marquees Wilson, quit the team after being suspended indefinitely. In a statement to the media following his departure, the former Cougars player made some allegations about the Washington State football program.

In response to those allegations, Leach told me the following:

“If you walk off of practice, you’re not part of the team anymore and it’s really as simple as that. And then so we’re pretty much just focused on the guys that are here and what they do ‘cause it all starts with effort and hard work. If everybody is not committed and involved with that, it’s really not worth it for anybody. … It hadn’t been a problem at all. I think it’s been revealed for what it is. Just you know, I think it’s been totally revealed for what it is. You’ve got a selfish player who walked off the practice field and everybody else is working hard and so you know we ignore him and we applaud the guys who are out there working hard. …

I think that there’s always bad habits that need to be broken and you know a whole lot of success is associated with work ethic and hard work. Then I think, also, you get instances where you know somebody will have a certain amount of success and then get complacent and think they can just ride on that.”

“If I get lucky I’m gonna go see the James Bond [SkyFall] sometime this weekend. I haven’t seen that. The Abraham Lincoln movie looks promising.”