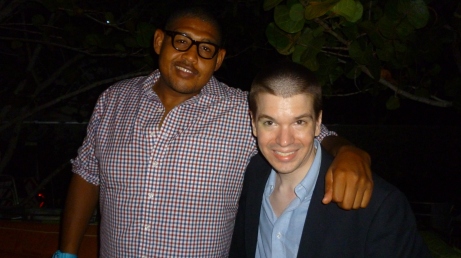 Next month will make five years since we spoke with actor Omar Benson Miller [see here]. You might recall the actor for his role in the Richard Gere, Susan Sarandon and Jennifer Lopez movie Shall We Dance or for his recurring spot on the TV show CSI: Miami.

Over the years, people have ended up on CYInterview in their quest to figure out if Mr. Miller is related to Oscar winning actor Forest Whitaker. In 2008, Omar told us a rumor began on Wikipedia which led some to believe the two were related. Though no one can deny the physical resemblance, they are not related.

With upcoming movie projects where he will be working with major stars including Sylvester Stallone, Jason Statham, The Rock and Mark Wahlberg, Omar’s career is continuing to climb to new heights. We spoke with him during Irie Weekend. It was great to finally meet this talented actor. He is truly a class act. You can see all our coverage of the Irie 2013 events here, here and here.

You can read the highlights and listen to the entire CYInterview with Omar Benson Miller below:

Speaking about people still believing he is related to Forest Whitaker, Omar shares the latest developments and comes up with a way, perhaps, how the rumor could be put to rest:

“I don’t know what to do. And you know what? I can even deal with related to. Nowadays people in Miami seem to think I am Forest Whitaker which is even more disheartening. I don’t know how we switch it. … I think somehow or another people need to see us together in the same room and I think that would help dispel the rumors. Otherwise they think we’re one person.”

His recurring role on CSI: Miami gave the actor time to connect with the city. That will continue when he teams up with The Rock/Dwayne Johnson for a project that is going to be filmed in South Florida:

“It’s kind of under wraps, but it’s based on a few retired athletes, retired NFL players and it’s The Rock. Mark Wahlberg is producing it. I’m excited about that one, really excited. It’s gonna be on HBO.”

Moviegoers nationwide will get to see Omar alongside Jason Statham, James Franco, Winona Ryder and Kate Bosworth in the film Homefront out later this year. He gives us a preview:

“That was great. This is the first time you’re gonna see me get to my action hero action. It’s gonna be fun and Jason’s great to work with. Sylvester Stallone produced that one and wrote it and that was incredible to work with him and get to meet him and for him to select me and the director of that film directed me in The Express so it’s cool. It was a great shoot. We were down in New Orleans.”

In his role in the 2003 movie Shall We Dance, Omar has a dance scene at the end of the film with his onscreen fiancé played by friend of CYInterview, the lovely and mega-talented Mya. [See some of Mya’s past CYInterview moments here, here and here.] He told us what it was like to dance with her:

“That was great. You know it took me about two months to learn the routine. I think it took her three days. So it goes to show how great of a dancer she is and she was just wonderful to work with. We had a good time and at that time her album, she had an album that was just coming out. It was a really exciting period.”

Having the opportunity to work with many of the Hollywood’s great stars, Omar provides fellow actors these words of wisdom:

“You know I learned not to be scared. Confidence is really key and you can mess up. You know even if you mess up you may find the answer in messing up. And in that, the greats have really taught me that. Exploration is the key to good performance and it also taught me how much more important it is to do good once you get your success in the industry and so that’s how we end up out at things like this [Irie Weekend].”

You can learn more about Irie Weekend here.

7 Replies to “Repeat After Me, Omar Benson Miller is Not Forest Whitaker: The CSI: Miami Actor Speaks About His Career, Working with the Incredible Mya and the Fact that he is Not Forest”