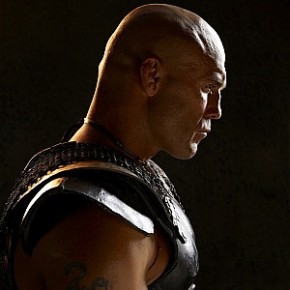 In an era where fighters come and go, Randy Couture has stayed through it all. The 45-year-old MMA legend is taking his status to the acting realm now staring in The Scorpion King 2 playing Sargon and replacing Dwayne Johnson in that role. The former heavyweight and lightweight champion hopes to have at least one more fight, but it has been delayed by a current lawsuit with the UFC, which is the promotion that made him what he is today. Even with a lawsuit currently on the table, the nickname The Natural still suits him well. You won’t find a guy that has more respect for this cult sport that is on the rise.

Listen to the Randy Couture CYInterview:

Chris Yandek: Did you ever think you would make the transition from MMA fighter to now a movie actor in The Scorpion King 2?

Randy Couture: “I’ve been really excited to get the chance to step up. This has kind of been the biggest role I’ve gotten the chance to play. I’ve been in seven pictures now. The first few were kind of small fight scenes and bits and parts, now getting my chance to sink my teeth into playing some real characters and obviously a physical role in Sargon, but not a fight role. It’s kind of fun. I am excited about that.”

CY: It’s interesting because you were at the beginning of this whole thing when MMA started. Did you ever think you’d break out to you guys now being in TV shows and movies?

RC: “No. It’s really kind of taken on a whole life of its own and gone way father than a lot of us expected it to go. I think we all thought there was something special about the sport and the athletes that competed in it, but we were largely misunderstood and for a long time. I think people are starting to get it. They’re starting to understand us and are intrigued by the matchups and the nature of the sport. It’s really kind of taking off.”

CY: Tell me about your experience during the movie [The Scorpion King 2] and whom you got along with?

RC: “I had a great experience being in South Africa and Capetown. Where they shot was a lot of fun. Very cool place. The sets, the costumes, and the whole thing was just an awesome experience. Had a lot of fun working with Russell Mulcahy the director most known for The Highlander and the new Resident Evil. He’s pretty well known so it was a good experience for me to work with him. I enjoyed our stunt coordinator and all the stuntmen kinda working out the fight scenes and swinging around the big axe and doing all this stuff that I got to do in this movie.”

CY: Do you want a career in show business? Maybe do something like Dancing with the Stars?

RC: “I don’t know about Dancing with the Stars. I did the little vignette with Leeza Gibbons in the last season and had fun and met all the casting people. It was something that they considered making me an offer to be in the next season after that, but I am enjoying acting and hoping to get some more character roles and get to play some more movie stuff. Then we’ll see and maybe that will lead to Dancing with the Stars down the road. Who knows?”

CY: Your new book out Becoming The Natural was just released. What will we be surprised to find out in your biography?

RC: “I don’t know what they’ll be surprised to find out. My life like everybody else’s has had its twists and turns. We’ve all kind of faced adversity in one way or another. I think I am not different and we all kind of manage to fight and overcome those things and become better people from them and those are the kind of things that I wanted to highlight in the book and I think it’s a pretty honest view of myself and what I’ve been through and what’s contributed to me being the person that I am today.”

CY: There has been an ongoing legal battle between you and UFC. Can you tell me where the lawsuit is currently?

RC: “Well, it’s still kind of stuck in litigation between the Texas lawsuit with Mark Cuban trying to get a declaration from the state as to where I stand with my contract to the ongoing litigation in Nevada with the UFC over the contract. It’s all just kinda dragging on. I think their attempt is to keep me from fighting Fedor [Emelianenko] anywhere else. At the same time at this point they aren’t willing at least at this point to make the Fedor fight happen, which is an issue obviously for me. We’re hoping to be free and clear hopefully sometime in the next month or two, maybe as late as October and find a way to make that Fedor Emelianenko fight happen.” (A ruling was just made last week and this lawsuit will be decided by a Nevada arbitrator, though it is likely there will be an appeal.)

CY: Was it disappointing to you because you were really one of the founding fathers of the company and now it comes to this. Is it sad to see that loyalty wasn’t what you thought it was?

RC: “Well, I’ve felt that way kinda all along since Zuffa bought the company. I’ve been a loyal contributor to the company and brand and I never felt like I ever got in a lot of ways a fair shake. Kinda ended up at odds with Zuffa when they bought the company over rights and some of these things, but none of that really matters. What’s most important is fighting. I am in this because I love to fight. I got at least one more fight left me in at 45. I want to fight the best guy and most consider Fedor the best guy in the heavyweight division so that’s the guy I should be allowed to fight.”

CY: How do you think you were able to get so much power out of your hitting?

RC: “Well, I think there is technique involved. Through the training process you learn to coordinate. There is some timing and technique involved and maximizing your power. Everybody has that. It’s just a matter of establishing the footwork and the timing with your hips and everything that go into mechanically throwing the proper punch that allows you to maximize your power for your body weight.”

CY: What are your thoughts on Kimbo Slice? Is the guy all hype?

RC: “Well, I think there is a difference between how Kimbo Slice sees himself and what the Elite XC is doing in a marketing sense. They’re trying to sell tickets and sell pay perviews. There is a huge difference there. I think Kimbo is the first to tell you he has holes in his game and he’s working diligently to try and become a complete mixed martial artist. He just doesn’t want to be a brawler. I think that his last fight against James Thompson pointed out some of those weaknesses. I think he’s definitely a real fighter, but I think he’s still got a ways to go before he’s a top contender, a top guy in that weight class. It doesn’t matter what Elite XC says. They’re just trying to sell their brand, seats, and pay perviews. What’s most important at least from my perspective is Kimbo and his approach and the things that he does in his demeanor. He’s got no fear. He’s not scared to get in there and bang with anybody, but he realizes that he [gets] up his ground game more, learn some jujitsu, fashion some wrestling, so he can keep the fight where he wants to keep it.”

CY: Finally, when it’s all said and done, how do you want to be remembered by the fighting world?

RC: “Well, I hope to just be someone that has represented the sport with some integrity and I am kind of proud of that. I hope that’s the way people see it.”

The Scorpion King 2 comes out on DVD August 19th.

You can find more information about Randy Couture at his official site at http://www.thenatural.tv/