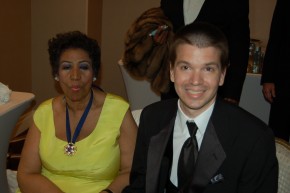 Over the last two weeks, we have brought you coverage of the 20th edition of The Blacks’ Annual Gala. You can see it all here: [here]. Luminaries attending the philanthropic soiree like hosts Lea and Roy Black, Gloria and Emilio Estefan and Courtney Love, no doubt, anxiously awaited the evening’s main event. And that main event did not disappoint. It was masterfully executed by a living legend.

At 72 years old, the Queen of Soul, Aretha Franklin put on an inspiring concert that electrified the ballroom at the Fountainbleu Hotel on Miami Beach. Earlier in her performance, Ms. Franklin sang Grammy winner Adele’s Rolling in the Deep. That cover is on Aretha’s new album Aretha Franklin Sings The Great Diva Classics.

Aretha went on to demonstrate her piano skills, wowing the crowd. Ms. Franklin’s singing exuded energy, excitement and passion, making for an unforgettable evening. The legend finished her performance by signing some verses from her iconic song Respect.

After the evening was over, we had the honor of meeting Ms. Franklin backstage. See our photo above.

Aretha Franklin’s performance would not have been possible without the tireless efforts of the “Social Mayor of Miami,” Lea Black and the generous financial contributions of Steve Mariano. Mr. Mariano is an entrepreneur who has worked for over two decades in the insurance industry. He is the Chairman of the Board and Chief Executive Officer of Patriot National Insurance Group. His insurance company is based in Fort Lauderdale, Florida.

The 20th edition of The Blacks’ Annual Gala was an exciting evening for a good cause. Ms. Franklin’s appearance made the night unforgettable. Thank you Lea and Roy Black. And thank you Mr. Steve Mariano for the opportunity to experience the Queen of Soul’s incredible performance.