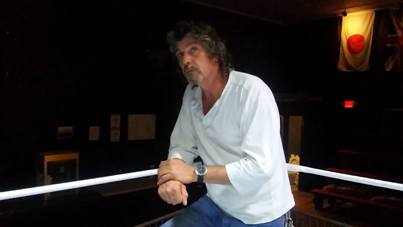 In the Fall of 2016, professional wrestling legend Michael Sam Houston joined us here on CYInterview for an in-depth discussion about his life and the adversities he has overcome [see here]. With less than two weeks until WrestleMania 41, we welcome him back for an update on his life today, as well as to chew the fat about the past.

During our conversation, Sam, who participated in WrestleMania 4, shared some interesting stories about the event. He says one of the wrestlers pulled a rib – the wrestling term for pulling a prank – by putting sleeping pills in the coffee available to wrestlers backstage during that show, so the wrestlers would be tired instead of energetic. Additionally, he claims that singer Hank Williams Jr. took a liking to his mother at a bar where they met, by chance, after WrestleMania 4.

When it comes to latest projects and what is ahead, Sam tells us about his Sam Houston’s Rack of Ribs. It is a CD containing some great pro wrestling rib stories from his career.

The former WWE, WCW, Jim Crockett Promotions and Mid Atlantic Wrestling performer tells us that he is getting a lot of positive reviews for his recent work on the independent wrestling scene. This coming July, he will face Greg “The Hammer” Valentine in a wrestling legends match at West Virginia Weekend in the Country. The event brings music and professional wrestling together. The festivities are scheduled to take place between July 21st and July 23rd.

Sam Houston will be part of West Virginia Weekend in the Country taking place July 21st to July 23rd. Check out their official website here.

To order a copy of Sam Houston’s Side of Ribs, you can visit his Facebook page here.

Pro wrestling promoters and others interested in booking Sam for matches and paid appearances can do so by emailing
samhoustonbrand@gmail.com