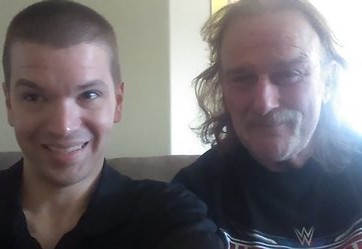 In his home in Las Vegas, Nevada, pro wrestling legend and WWE Hall of Famer Jake “The Snake” Roberts sat down with me for the first time in eight years. The last time I saw Jake was August 8, 2009. It was the day I graduated from the University of Florida. The wrestling superstar came to my graduation. See our photo above at his home this week.

Today, Jake says he has been sober for six years and has a new outlook on life. Almost a decade ago, the master of ring psychology had spoken about a doing a book on his life. Now, he says he has written 600 pages for a book covering the first half of his life. He plans to write a second book that would take us from there to the present.

Speaking candidly about his life, Jake talks about living in Las Vegas, how he avoids temptations in Sin City, his new pro wrestling school and why he wished he would have pursued sobriety sooner, among other topics.

With the Ric Flair documentary on ESPN, titled Nature Boy, debuting this week, Jake reveals to us that he and Diamond Dallas Page tried to reach out to Flair after his health scare earlier this year. He said they were interested in assisting him with his sobriety. Jake says Ric was not interested in receiving help from either him or Mr. Page.

Conversations with Jake Roberts are always a must to listen to. Our latest segment with him is no different. You can read the highlights and listen to the entire CYInterview below:

On his life today, Jake said this:

“I still struggle with, you know, not really feeling good about myself at times and I certainly give myself a reason to, but you know, enough’s enough and you gotta move on and where I’m at these days, man I just want to reach out and help as many people as I can, because I know that each time I do that I’m closer to getting my dream come true and that’s just to continue to live sober, you know, and to enjoy life.”

The pro wrestling legend does not have a publisher yet, but he says he has written 600 pages for a book covering the first half of his career. He wants to write a second book as well:

“We’ve got about 600 pages ready to go and right now I’m doing my last read. I’ve done about four last reads, but this is my last read for sure. I’m gonna go through it one last time and just check some things out and release it.”

After Ric Flair’s health scare in August, Jake says he reached out to the “Nature Boy” to help with his sobriety, but Flair was not interested in his or Diamond Dallas Page’s help:

“I even tried to help Mr. Flair and I hope Ric can do it. He’s sure going at it with the wrong attitude. He thinks he snapped his fingers, that he can just beat it. There’s a lot more to it. … He’s in the hospital and he’s made that decision to quit drinking. My God I made that decision a million times and he thinks that’s all there is to it. There’s a lot more to it because you know why he’s in that hospital, that disease we call alcoholism is outside doing pushups getting ready for him to come out of the hospital. You’re in a guarded position in the hospital. You know, there’s not a lot of alcohol around.”