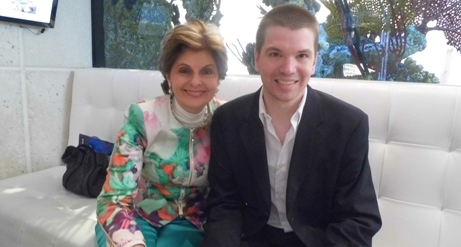 For almost seven years, powerhouse attorney Gloria Allred has been a CYInterview regular, providing us with legal analysis and perspectives on a variety of compelling topics. In 2012 Ms. Allred joined us, along with former New Mexico Governor and Libertarian presidential candidate Gary Johnson for an important discussion concerning the fairness of the presidential debates see here.

Recently, the civil rights attorney was on South Beach to receive a lifetime achievement award at the National Trial Lawyers Summit. Throughout her legal career, Attorney Allred has been fighting for the underdog. Her tireless work in the areas of women’s rights, gay rights and helping those who have been discriminated against, among other things, led to her receiving the President’s Volunteer Award at the White House. That award was presented to her by then President Ronald Regan. Speaking of Presidents, last year President Obama stated that Gloria was one of the best attorneys in America.

We had the chance to finally meet Gloria in person at the Loews Miami Beach Hotel. We spoke with her about the prestigious award she received, as well as other topics. You can read the highlights and listen to the entire CYInterview below:

Speaking about winning the lifetime achievement award at the National Trial Lawyers Summit, Gloria told us this:

“Part of what I like to do when I accept an award like this is to try to inspire and encourage other lawyers to work in the area of civil rights, to fight for the individual against the rich, the powerful, the famous, against big corporations, against government, against wrongdoers, batterers, those who sexually abuse children, rapists and, you know, to ensure equal rights for women with men, rights for minorities such as gay, lesbian and transgender individuals, rights for those who have been discriminated against on account of their race or other factors over which they have no control. I like to get them excited to want to be in this field to be warriors for justice.

I do have a passion for justice and I like to encourage others to go into this field because they’re trial lawyers here from 50 different states and I know that lawyers can do more to fight for the individual, to level the playing field, to bring power to meet power on the other side and to win justice and to empower the individual. So that’s what I encourage them to do. As I told them when I finished my remarks, I am inspired by Mother Jones who said, ‘Pray for the dead and fight like hell for the living.’”

An extensive, upcoming CYInterview is slated to be released with adult film star Joslyn James. Ms. Allred represented Ms. James during Tiger Woods’s circumstances back in 2009. Speaking about her past client, the powerhouse attorney offered this about Joslyn:

“I think she was very courageous to speak out and talk about what she experienced in her relationship with Tiger Woods. She did have a relationship with him and I felt that he, in the end, was not taking responsibility for the relationship that he had with her and she’s very bright, she was in love with him, she had I think over 1000 texts and emails from and to him and I think she deserved better than she got from Tiger Woods and I’m very proud of her that she stood up and she spoke out as well as she did.”

You can find more information about the National Trial Lawyers Summit here.