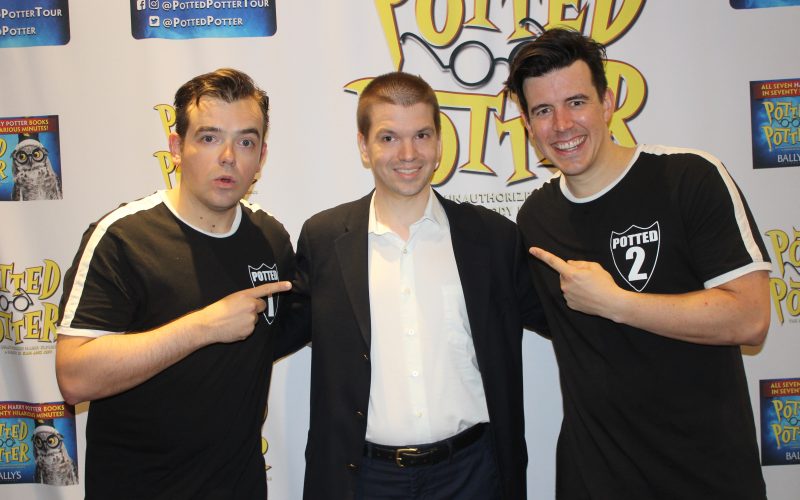 Since June, wizards and dragons have moved onto the Las Vegas Strip. Hailing from England, actors James Percy and Joseph Maudsley have brought an unauthorized Harry Potter show to the Entertainment Capital of the World. Running weekly at Bally’s Hotel and Casino at the Windows Showroom, the show is titled Potted Potter. For anybody who has read the Harry Potter books or seen the movies, this two-man show will be highly enjoyable.

Potted Potter is a show you can bring the entire family to. When we were in attendance on Tuesday evening, the room was full to capacity with people of all ages. James Percy plays Harry Potter and his acting partner Joseph Maudsley plays every other character in the series during the performance. See our photo with the two actors above.

On whether Harry Potter author J.K. Rowling has seen the show, James Percy told us the story that she missed out on an opportunity to see the show years ago. However, they are saving a chair for Ms. Rowling, in Las Vegas, if she wants to come see Potted Potter:

“The story goes that with J.K. Rowling, the show was playing up in Edinburgh years ago and it was a sold-out show. And a lady came to the box office and tried to buy a ticket and she was told that the show was sold-out and, you know, unfortunately she couldn’t see it. And then it was only then that the management walked past and recognized that lady as J.K. Rowling. So J.K. Rowling got turned away from our show. So, from now on, wherever we play in the world, we save a seat for J.K. Rowling just in case she turns up.”

Joseph Maudsley adds that their show has gotten great reviews from the locals here in Las Vegas. The word is getting around since they started the show in June:

“One of my favorite things chatting afterwards is there’s so many locals that are coming to see the show. They’re like, ‘Oh, this is great. We never venture into the strip to come watch a show. You guys, we’re going to go tell everyone.’ And that’s just great to be able to like be performing to the locals who love it. I feel like we’re doing Harry Potter justice there.”

For more with actors James Percy and Joseph Maudsley on their Las Vegas show Potted Potter, you can listen to the entire CYInterview below:

Listen to the entire James Percy and Joseph Maudsley CYInterview:

You can find all upcoming dates and purchase tickets for Potted Potter at Bally’s Hotel and Casino clicking here.