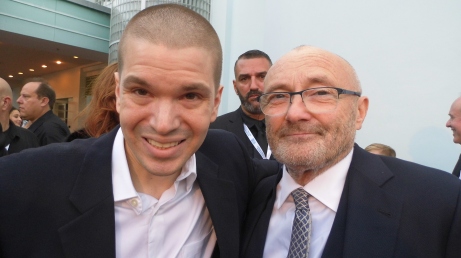 This past Friday evening, mega music star/songwriter Phil Collins returned to the stage for his first musical performance in many years at The Fillmore Miami Beach. Known for his work with Genesis and as a solo artist, Mr. Collins multiple hits include: Against All Odds, Another Day in Paradise, Easy Lover, One More Night and In the Air Tonight.

His seven song performance during The Little Dreams Foundation Benefit Gala, a charitable organization he founded with his partner Orianne Collins, was the first step in what may be the beginning of the next chapter of Phil Collins’s music career. The Grammy, Oscar and Golden Globe winner has been talking about the possibility of an active performing career going forward. There have also been reports about a possible world tour, but he has not confirmed that yet.

Before he got on stage at The Fillmore Miami Beach, we were on the red carpet with Phil Collins and Orianne Collins to talk about his return to live performing and their foundation that helps many children realize their artistic dreams.

You can hear both of their CYInterviews and read the highlights below:

Listen to the Phil Collins and Orianne Collins CYInterviews:

Speaking about his first musical performance in front of a live crowd in years, at The Fillmore Miami Beach, Phil Collins told me this could be the beginning of more performances and the start of his next musical chapter:

“Could be! You know, I mean, I’ve enjoyed it, rehearsals. I got friends back in my band again, you know, some of my band. And Nick’s [Collins’s son] playing drums with us and it sounds fantastic. And so, you know, it’s possible. I’m thinking about it.”

Phil’s current partner, Orianne Collins, told us what it means to her to see him sing live, for the first time in numerous years:

Sixteen years ago, Phil and Orianne started The Little Dreams Foundation to give children a chance to achieve their dreams in the arts. Phil Collins tells how it came to be:

“It’s something Orianne and I started 16 years ago. We’re, always getting letters from kids wanting to break into the business and so, you know, we decided to start a foundation to help them. So we take children and we, they apply for the audition, we audition them and then we will pay for the courses if they pass the audition, will pay for the courses and give them all the guidance we can and then when they’ve grown up, they fly away.”

On what the foundation means to Orianne Collins, she told us this:

“It means a lot. It’s my emotional work that I do for the last 16 years. You know, the meaning of The Little Dreams Foundation is to help children who are very talented, but have no financial means to realize their dream. And it’s been an amazing journey to be able to help all those kids in Zimbabwe, Morocco, Europe and now in the United States.”

You can find more information about The Little Dreams Foundation clicking here.

One Reply to “Phil Collins is Back! First Concert in Years, at The Fillmore Miami Beach”