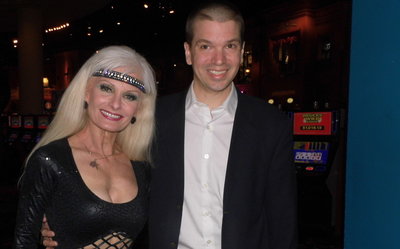 A few weeks ago we told you about the Las Vegas variety show, World of Wonder, at the Rio All Suite Hotel and Casino [see here]. One of the main attractions of this show is arbalist Silvia Silvia and her amazing feats utilizing crossbows and arrows. See our photo with her above, from when we were with her a few weeks ago at the show.

Silvia Silvia is a third generation circus performer who told us that no one else in her family will ever attempt to do the things she does. This is because parts of her performance are simply too dangerous. She says her act is quite complicated and takes a lot of preparation, before she appears in front of audiences in Las Vegas. Her performances have actually taken her all around the world. One of her feats is holding five crossbows together while shooting at multiple targets. The arbalist says it took many years to build up to that ability.

Movie watchers and pop culture enthusiasts might see in Silvia Silvia a real life Katniss Everdeen, who is the female character from the famous Hunger Games books and movie series. The difference being that Katniss is an archer utilizing a more traditional bow, while Silvia Silvia uses a crossbow. Today, many people use the term Archer for people who use crossbows, though they are technically arbalists. Actress Jennifer Lawrence plays Katniss Everdeen in the film series.

Silvia Silvia’s time on America’s Got Talent put her in front of millions people as she performed the unthinkable. Arguably, her most amazing routine is with an apple placed atop of her head. Numerous crossbows are lined up, which she shoots and in so doing the last arrow hits the fruit dead center while it’s on her head. Talk about scary. It is something she has done for almost 30 years. She always prays before the act begins that nothing goes wrong and the arrow goes exactly where it should.

In Las Vegas, there are many unique acts, but Silvia Silvia’s performance in World of Wonder is one of a kind and worth seeing. Fans can even meet her after the show. Not only is she a great performer, but she is humble and accommodating to her fans.

You can read the highlights and listen to our entire CYInterview, focusing on Silvia Silvia’s life below:

On her life as an arbalist, as part of a circus family:

“We were growing up with this act, like in the 80s. We started growing up in this act and then I worked all around the world and it was exciting because everybody was very surprised to see a woman doing this kind of act.”

Because it is very dangerous, Silvia Silvia arrives hours in advance to check her equipment and prepare, before the day’s first performance of, World of Wonder, at the Rio:

What does it mean to be here in Las Vegas performing?

“The work here is amazing. I am so happy to be here in Las Vegas. It’s never too late to be in Las Vegas. So I am very happy because Las Vegas for us is the top, you know, for us. We are all around the world, but if you make it to Las Vegas, you already make it the best.”

You can find more information about World of Wonder and purchase tickets clicking here.