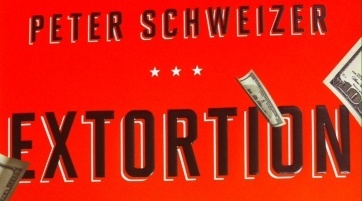 In 2011 we brought you a CYInterview with Peter Schweizer [see here]. His appearance on 60 Minutes, that year, led to Congressional legislation, resulting in the passage of The Stock Act. His NY Times Bestselling book, Throw Them All Out, was the main focus point for both interviews.

Two years later, the Breitbart Editor-at-Large, President of the Government Accountability Institute and the William J Casey Fellow at the Hoover Institute at Stanford University returned to 60 Minutes to continue exposing ways members of Congress are enriching themselves. His new book, also a NY Times Bestseller, is entitled Extortion: How Politicians Extract Your Money, Buy Votes, And Line Their Own Pockets.

Peter joins featured columnist Jay Bildstein and myself for our latest conversation. He is a man who continues to expose Congressional corruption. You can read the highlights and listen to the entire CYInterview below:

Though he might not be one of Congress’s most favorite people, Peter says he does have communication with members in Congress who want the changes he has recommended, to help end corruption in Washington:

“I do get communication from people who are in Congress who do want to make a difference, who do want change there. They tend to be relatively new to Congress so they have not faced, you know the constant barrage for a sustained period of time that is designed to sort of shape them and mold them into something that they are not now. But when it comes to senior officials, they generally don’t like what we’re talking about because in the book, you know I talk about the fact that committee seats are for sale, that there are party dues, that there are all these techniques that they have to extort money from people and so this is kind of like the cookbook that they don’t want you to know about.”

In 2011, Mr. Schweizer’s book resulted in the introduction of The Stock Act, which was later voted and signed into law. Discussing what The Stock Act does, he offered this:

“It gives us greater and more immediate disclosure of financial transactions and stock transactions. It does say technically on the law books now that engaging in insider trading as a member of Congress is illegal and those are both small victories and I think we have to remain optimistic about the future and the ability to shape our government because if we don’t, it’s just very easy to become detached and not be involved and that of course is really what they really want in Washington ultimately is for us to leave them alone and for them to sort of lead us as they see fit.”

In Extortion, the NY Times bestselling author states legislators not solving problems in Congress creates more financial incentives for them than coming up with solutions:

“As one of the former CEO’s of Shell Oil explained to me in the book as I was interviewing him, you know the problem is that in DC the business model’s all backwards. All the money is to be made not from solving problems or fixing problems. If you start fixing, solving problems, the money dries up. You don’t get the lobbying contracts, you don’t get the donations, you don’t get the sweetheart deals for your kids. So they want problems to linger and they want problems to be hyped and they want them to continue to go on because that’s where the money is. If they were to turn around tomorrow and start dealing and fixing these problems, the money would dry up. So it’s really a cultural problem. It’s not in my mind about electing the right people, it’s about changing the incentive structure in what is our nation’s capital.”

There is also great financial incentive for the people crafting legislation. For those who create laws, they can subsequently leave Washington behind and start up a private sector business, charging clients to interpret the legislation they created.

“I think first of all you know there should be a rule as to who writes bills. You know, if it’s written by a lobbyist, whoever introduces the bill should sign a legal affidavit that says here is the author of these sections of the law or of this amendment or whatever’s being offered so we have transparency. A lot of bills are being written by lawyers in the financial sector and other places who are cashing in on this. And then I think the second thing is we need to have a rule that if you are writing legislation and bills, you cannot go out and then consult or interpret or define what it means and cash in.”

Discussing three things he would do to change the Congressional culture, Peter tells us:

“My reforms in Extortion are you know, number one, this ban on soliciting and receiving campaign contributions as they occur. I think number two we need to get rid of this loophole for leadership PACS which are a tool of self-enrichment by members of Congress who are able to use those funds for their personal use. And I think number three we should create a permanent ban if you are a member of Congress you cannot become a registered lobbyist when you leave and furthermore while you’re in Congress, members of your immediate family cannot be registered to lobbying. There’s estimates in some cases that in the U.S. Senate, you’ve got 30, that’s almost a third of the entire United States Senate has an immediate family member, a husband and wife or son or a daughter that is a registered lobbyist.”

In his latest book, the Editor-at-Large for Breitbart tells us how leadership PACS have become virtual personal bank accounts for members of Congress to use for almost anything they desire:

“There are no restrictions by the SEC on how that money can be used and so you literally have leaderships PACS to put family members on the payroll, to take international trips, to go to wine country for four days to tour wineries. You name it, leadership PAC money has been used for it and what it does is it changes the dynamic to where raising money is not so much just about winning election and reelection anymore. It is about enhancing your lifestyle. It’s about living larger than you actually could based on how much you make. And I think the problem is not only just how unfair and how corrupting it is, but it’s just further evidence and a further impetus to how the political class is separated from the rest of us.”

Beyond his many points on how Congress is currently corrupt, Mr. Schweizer spends some time in Extortion analyzing the case of the downfall of the major financial company MF Global and its CEO Jon Corzine where 1.2 billion dollars disappeared. On why he believes there were never any charges filed against former New Jersey Governor/former U.S. Senator Jon Corzine for his role in the collapse of MF Global, Peter tells us this: [For a broader perspective of Peter’s views on MF Global, please listen to the CYInterview.]

“In the case of Jon Corzine, you had a very clear case that they not only, you know, took money from customers like they weren’t supposed to, but they actually failed to report and were essentially acting in a fraudulent matter, that there was criminal conduct and I don’t say that, I’m not a lawyer, this is really based on what a lot legal experts who have looked at the case say law professors and others to say that there was criminal conduct that took place there. We quote in the book from the assistant comptroller of MF Global who worked there I believe it was for 17 years and then Jon Corzine came in and they continued to stay there.

And she was very blunt and direct and said the reason Jon Corzine’s not facing criminal charges is because he is a campaign bundler for the Obama Administration. And in this department of justice we have an unprecedented politicized nature of the DOJ. Eric Holder and others that are in senior positions are campaign bundlers for the Obama campaign so they were in the business of raising money for his election and one of those people that gave a lot of money for his election and raised money was John Corzine. So it should not be a surprise very sadly that Corzine avoided prosecution for what was clearly out of line conduct and behavior.”