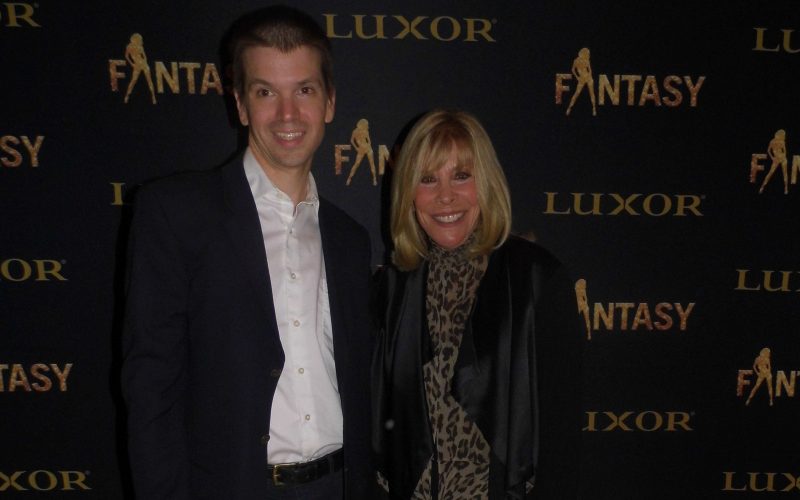 Earlier this month, the venerable Las Vegas show, Fantasy, celebrated its 19th anniversary at the Luxor Hotel and Casino. The show, which comprises comedy and beautiful women, does not disappoint. The concept for Fantasy is the brainchild of producer Anita Mann. See our photo above.

Ms. Mann, a dancer, choreographer and five time Emmy winner, has worked with entertainment greats such as Elvis Presley and Lucile Ball. On how you make a show last for 19 years on the Las Vegas Strip, she shared this with us on the red carpet (which was actually gold in color,) prior to the special anniversary performance of Fantasy:

“That’s a good question. I take it one day at a time. You know, I don’t really think there’s, there’s not really a formula to doing it. I think it’s the concept of wanting every day to make the show the best you can make it every day because there’s a new audience every night. So it has to be like opening night, every night. We work hard.”

Before the evening’s special 19th anniversary show, at the Atrium Showroom, Anita Mann gave an inspiring speech about how Fantasy has lasted 19 years and thanked all the people, over time, who have been part of it. She told the audience that the evening’s performance would be dedicated to Robin Leach, who recently died. The choreographer and producer said the iconic host of Lifestyles of the Rich and Famous was the first person to call her when word got out she was bringing a show to Vegas.

The yearly anniversary show is special in that the stunning women of Fantasy have the opportunity to give the world a look at their photos, which will be used in their upcoming calendar for next year. You can see pictures of the women of Fantasy below. This year, a part of the proceeds from the calendar sales will benefit Keep Memory Alive, in honor of Robin Leach.

Besides the show’s stellar choreography, host and singer Lorena Peril wowed the crowd with her impressive vocals and comedian Sean Cooper had the audience in stitches. We will bring you our CYInterview segment with Lorena Peril soon.

Anita Mann shared with us that she already has particular surprises in mind for the 20th anniversary Fantasy celebration, as well as some great stories about Lucile Ball and more in our CYInterview, which you can listen to in its entirety below:

You can purchase the 2019 Fantasy girls calendar clicking here.