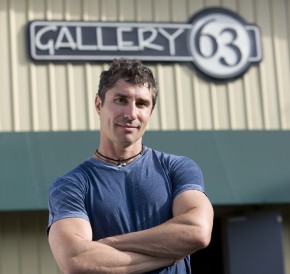 Paul Brown is a fourth generation collecting enthusiast. He grew up surrounded by collectibles, antiques and memorabilia. Now, he is the host of Discovery Channel’s Auction Kings. His father has one of the biggest collectible/antique shops in the Southeast.

Mr. Brown has his own shop and his teenage son is following in the family tradition. For the average person looking for bargains at garage sales, flea markets or even looking for stuff stowed in closets, basements and attics at home, Paul tells us how to spot valuable items:

“From the time I couldn’t even walk, I was dragged to state fairs and auctions and other auctions and flea markets and antique centers and all kinds of stuff like that. So as far as looking for value, you know, I say this over and over again, value is so subjective. Worth is so subjective. Anything is worth what somebody is willing to pay for it and chances are if you buy right, someone is willing to pay a little bit more. The question is alright, how to find that person, somebody in the world that will pay more for something than somebody else did no matter what the level is. The trick is finding that person and that’s sort of what the auction gallery is all about.”

When it comes to older items, Brown says the best way to go about finding out if something is authentic is to seek expert advice:

“You kind of have to find somebody that specializes in that particular discipline. Obviously being in this industry, you know you kind of put together a nice little contact sheet. I’ve got experts from everything from jewelry and gold and silver, finery like that to pottery to stained glass windows to fine art. You just kind of pick and choose and find the right person.”

Now in its second season, Auction Kings joins shows such as Antiques Roadshow and Pawn Stars, which feature various antiques and collectibles being valued and at times sold.

“Stuff, we all got it, rich, poor, black, white, no matter what your background young, old. It’s a big country and there’s a lot of stuff in it. Big world, there’s a lot of stuff in it and even people of a modest means can relate to certain things that they may have seen in their life at their grandparent’s house or what not. So you’re hitting across a wide wing. Any time you cast with a broad net, you’re gonna catch a lot of fish. That’s what we’ve done. That’s what other shows have done.”

On Auction Kings, besides individuals selling items off, there are also people getting great deals on unique things. Additionally, a part of the show has had a charitable direction. For example, a poem by the late singer Jim Morrison was sold with the proceeds going to charity.

“Auction Kings is sort of showing this marketplace of unique things. We think of a lot of things having a book value like a land or a security or something like that. Well, a lot of times we’re selling things that don’t have a book value, never will have a book value. We can all kind of look up. We’ve all got the Internet. We can look up and see see, ‘Wow! Somebody sold something like this in 1999 in New York or in Wyoming or wherever.’ That doesn’t necessarily mean that this one is worth that today here in Atlanta or in Peoria or in New York or in L.A. or wherever. Things are worth what somebody can pay for them.”

In these challenging economic times, some people are turning to selling off possessions as a way to make some extra cash. Mr. Brown provides some advice on how to identify valuable items, yourself, that you might be able to sell.

“If you’re scrounging the area for things to sell to make a couple extra bucks, then you can always look toward jewelry as the most obvious answer, but I would look toward collectibles that may have been in style at an earlier time and may not be necessarily in style now. For example, Tiffany Lamps, I don’t know, about 40 years ago, they were discarded as sort of you know your grandmother’s style. Just sort of an outdated, outmoded, dowdy old style. Then flash forward 20, 30 years, they become the most prized collectibles that are available. So if you look for things that are of quality make, whether or not they’re out of style, look for things that use to be quality or that were still quality and they probably will still retain their value.”

For all the items and unique things he’s come across during the course of his life, the Auction Kings host offers two examples of amazing pieces of history he’s had in his hands.

“I’m a man of letters myself. I love the notion of the written word. I’m drawn to it. One time, this woman was cleaning out a house, an antebellum mansion in Texas, right? And underneath the floor boards of the grand staircase in the foyer was a handwritten letter from General Robert E. Lee to General U.S. Grant and it was toward the end of the Civil War. There were supposedly two copies of this letter. This was the third sort of missing copy…We auctioned it off and a gentleman bought it and it now resides in the Auburn University Archives. He donated it to his alma mater. That was just staggering to hold in my hand…

Another one also happened to be letters, sort of ephemera if you will. These were a heretofore undiscovered or missing ‘folio of Martin Luther King’s speeches. They were first drafts of his speeches in about 1964, right. And they had his handwritten marks and edit marks and diacritical, put a new paragraph here, add something there, take this out, soften this, harshen this kind of things written all in his hand. I’m telling you what, to see that is, was just sobering and staggering and I had it in my hand as well.”

Finally, I asked Paul what we should know about the host of Auction Kings. Watching him on his Discovery Channel show, you see someone with tremendous enthusiasm for collectibles and antiques:

“I want people to know that I’m real. I love the idea of when a buyer is happy and a seller is happy. I’m obviously making a couple of bucks in the middle, but it’s not really so much about that. I love putting people together and what you see on that show… what you see, that’s pretty much the real deal. We’re real.”

The photo for this piece is credited to Discovery Channel.

You can find out more about Auction Kings at http://dsc.discovery.com/tv/auction-kings/