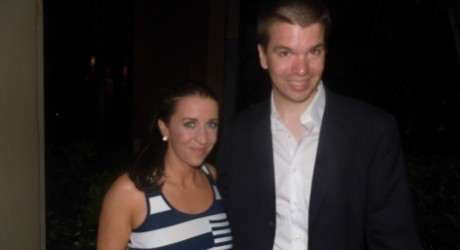 For millions worldwide, Justin Bieber is one of the biggest, if not the biggest, music star today. With millions of followers and hundreds of millions of views on various social networking and media platforms, Biebermania is a mega-force in the pop culture.

Justin was born in Canada to Pattie Mallette who, as a single mother, raised him. With over two million of her own Twitter followers, she is using her fame to help others. The NY Times Bestselling author recently released the teen edition of her book Nowhere but Up: The Story of Justin Bieber’s Mom.

Her book tells a tale of unfortunate and challenging circumstances. Those include being sexual abused as a child, being bullied, doing drugs as a teenager, attempting suicide and becoming a pregnant teenage mother. Having learned a lot through her experiences, Pattie is hoping to help others avoid many of the mistakes she made and hopes people learn from them.

Her story is inspiring. We had the pleasure of sitting down with Pattie for an exclusive CYInterview, while she was recently in Miami. We spoke with her in Coconut Groove, outside at the Gibraltar Restaurant located at the The Grove Isle Hotel & Spa. When you meet her, you cannot help but liking her and enjoying her positive energy.

You can read the highlights and listen to the entire CYInterview with Pattie Mallette below:

In recent years, the families of famous stars have gained celebrity in their own right. Being Justin Bieber’s mom, Pattie wants everyone to know that her only reason for getting into the spotlight was to help others:

“I just love the idea that Justin has such an amazing platform with, you know, so many teenagers, especially for me to be able to even utilize it for good and, you know, having over two million Twitter followers that call me mom; I’m just excited to be able to be a voice in their ear. … That’s the only reason that I wrote this book. That’s the whole reason that I’m doing all this is because I feel like I had a second chance and I was able to come through and it’s been really difficult, but I just want to encourage other people that no matter what you’ve been through that there’s hope.”

With a handful of challenges in her teenage years and beyond, Ms. Mallette talks about how to keep it going when the world seems against you:

“It’s a process. It’s a long process and I’ve had to really fight for my healing and that’s something that I really want to encourage other people to do is not give up and some days it looks really hopeless, but you know I think that if you just don’t give up and really reach out for other people. That’s what I had to do.”

In her book she shares stories about her biological father not being very involved as she was growing up. Ms. Mallette also wrote about feeling an inability to communicate with her mom as a child. She says had she had a more loving, supportive and involved set of parents, it would have prevented some of the negative things that she went through. The author shares some advice for teenagers who feel they lack the support and love of their parents:

“I think love just accomplishes so much and it comes in so many different shapes and sizes. I know for me being abandoned and that deep sense of rejection really, it led me to do a lot of things that I probably wouldn’t have otherwise. … What I would say to my teenage self is love yourself and sometimes when you’re not getting the love that you need from your parents, sometimes that you have to care enough about yourself and reach out for help. You know whether that’s a friend’s parent, whether that’s a teacher at school, whether that’s a counselor and don’t stop reaching out because there are a lot of resources and a lot of people that would love to help if they knew that you were in the predicament that you were in.”

In Nowhere but Up she tells stories about being sexually abused by numerous people as she was growing up. Sharing her thoughts on the subject, Pattie tells us this:

“Unfortunately so much abuse happens in the home or from family members or people that they’re really close to and I think that the kids are not, a lot of kids are just not told how to respond if something were to happen and I think it’s really important for parents to have an open dialogue with their kids and talk to them about these difficult issues.”

One of the topics discusses in her autobiography is children becoming emotionally disconnected from their families and others around them. She provides some helpful information for parents on that issue:

“I think there’s a difference between sadness and depression. I think sometimes we get sad. We have bad days, we have good days, but I think that if your child is distant and, you know, spends a lot of time, you know, with themselves and, you know, the sadness is prolonged, I think it’s just really important to pay attention to those things and even get a professional involved.”

With all the challenges the Canadian teenage mother- to-be had to deal with, she says getting pregnant with her son Justin Bieber, when she was only 17, provided a wakeup call:

“Getting pregnant was definitely one of the defining moments for me. I knew that I was responsible for more than just myself. So I really did kick it into high gear. Another defining moment for me was when I was in the hospital for trying to commit suicide and I had that, you know, encounter.”

Even after her son achieved success in the music industry, and things were looking up, she writes that she was still facing tough times including dealing with PTSD [Posttraumatic stress disorder]. Pattie tells us how she is doing today:

“Today I’m doing great. I have not arrived. I don’t think any of us ever do, but I am whole today. I say that I’m healthy and I don’t, I’m not on medication, daily medication anymore for depression, anxiety and there was a season that I had to be on that.”

The mother of one of the biggest pop stars in the world admits she was hesitant in allowing her son the opportunity to partake in a music career that would put him on a path to celebrity. However, Pattie says today she has no regrets:

“I think my hesitancy was, you know, all of the tragedy and all of the horror stories that you hear from the industry and I really wanted to make sure that he was surrounded by good people. … He has an amazing team around him. The management team that is around him all have become family and they are incredible and they really care about who he is, not just the pop star.”

In light of recent media reports on Justin Bieber, Pattie tells us she has private conversations with him when needed:

“I just say that I, I know that sometimes Justin has to do things his own way, but regardless the path that he has to get there I know that he’s gonna come out on top. I believe in him and I know that he’s gonna be great. … You know, I don’t necessarily try and make excuses for him. I just deal with him on a mother to son basis. You know, I have conversations with him because he’s my son. I don’t look at him as a public figure. I just deal with whatever situations arise and have, you know, private conversations. … He knows my story. He’s very familiar with what I’ve been through and hopefully he can learn from some of my mistakes.”

When it comes to her story, the NY Times bestselling author says she had been sharing it well before her son’s music career took off:

“I’ve been sharing my story in public settings since before he started his career, but when he turned 18 and wanted to you know have a little bit of space from mom, have me come on the road but not full time, was the time when I thought this is a good time for me to put this down on paper and get it out in a book form.”

As for future projects, Pattie tells us she is currently considering the possibility of a movie based on her life:

“Another platform that I’ve thought about doing was a movie. So those are, you know, thoughts that we’re kicking around, but there’s nothing, nothing set in stone at this point. … It’s not in the works, but we’re just kicking around the ideas.”

Pattie Mallette is using everything she has experienced, along with her new found fame, to help and inspire others. Beyond her books, she has started a new foundation called Round 2, in order to provide counseling to those who cannot afford it.

“Our goal is, the idea is something like this, when you get knocked down in round one of life, then there’s round two and so there’s so many things that could discourage you and trip you up and make you feel like you can’t go on such as addictions or self harm, bullying, people that need counseling. So one of our first initiatives is something, our first campaign is called speak up, listen up and we’re encouraging people to share their stories with other people and also listen to someone else’s story because so many people, especially teenagers, wanna keep everything inside. And so it’s really important we encourage talking about it and so, we wanna be able to fund counseling for people that can’t afford it.”

You can find more information and purchase a copy of the teen edition of Pattie Mallette’s book Nowhere but Up: The Story of Justin Bieber’s Mom clicking here.