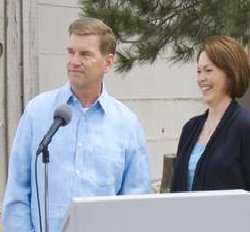 In 2006, Pastor Ted Haggard went through the toughest experience of his life when the media reported he had an ongoing relationship with a male prostitute. Haggard resigned from his church positions and sought help. Tonight, Sunday on TLC, Ted Haggard: Scandalous will profile what could be seen as his road to redemption.

Listen to the entire CYInterview with Ted Haggard:

Perhaps, the most important lesson in this story is that people have flaws and forgiveness is part of the healing process. The pastor told us what to expect from his TLC show airing at 10:00 PM EST, this evening.

“I think it’s a resurrection story. The primary message is, no matter how low people are, no matter how embarrassed they are with themselves or something else, no matter how much they lose, that the sun will eventually come up again. It’s an encouraging story to tell people to hang in there and keep going and press for the future that you want to create for yourself.”

Haggard tells CYInterview the most important lesson he learned, through his very public trials and tribulations, is that you have to survive. Love and kindness go a long way through the worst of times. Ted reveals a very dark moment, when he was in the second grade, involving a sexual circumstance with one of his father’s co-workers, leading to a trauma he needed to cure. He says that was the main reason for the darkest moment in his life – the public revelation that he had a sexual relationship with another man.

“I think with myself, it’s that you just have to survive. I think in the spiritual life, that God will be faithful to you if you’ll just move forward. I think culturally, the thing that everybody has to understand is that love amongst human beings is conditional. There’s no such thing as unconditional love amongst humans. Maybe the exception is our mothers. So we need to be kind to one another and faithful to one another and true to one another so we can trust one another…All the therapists have been clear with why my thing happened. When I was in the second grade, one of my dad’s employees had oral sex with me. So then I went through life. I never thought it was a big deal, but then it started to show up in my life and then I went through trauma resolution therapy, not treating the sexuality because there was nothing to treat there, but treating the trauma. With the trauma being treated, I was able to be myself.”

Given the events of Pastor Ted’s life, CYInterview wanted to gain his perspective on inappropriate behavior within the religious communities; the molestation cases regarding the Catholic Church being the best known examples

“We all hope that the religious institutions live up to the ideals that we teach, but the bible reveals God’s perfect plan for us. There’s not one religious man on the face of the earth, no matter how sincerely you believe the Bible that lives up to all of it. We’ll teach what the Bible says, pray continuously, but nobody prays continually. We’ll say what the Bible teaches, be angry and sin not, but everybody has a time or two in their life at least where they get angry and they sin. Since the Bible is God’s perfect plan for imperfect people, then there’s always gonna be that disappointment. I guarantee you, I’m not Roman Catholic, but when the priests took their vows of celibacy, they had great hopes of living pure, honorable lives and then they found themselves with very earthly temptations. Actually, I think that’s the human condition. That’s why we have judges that are indicted and police officers that get speeding tickets and librarians that prefer movies over books. We have all types of situations where we want to believe and teach an ideal and strive for an ideal, reach for the star and then fall short.”

Ted is open in saying he believes gays and people of diverse orientations do end up going to heaven, based on Jesus Christ’s sacrifice.

“I’ve always believed that all human beings get into heaven based on what Jesus did for us on the cross. So heaven is not an earned position for anybody, even the most self-righteous won’t get in unless they understand that God opened the door for them. The scripture says that God doesn’t condemn us, we condemn ourselves and that God is the one that opens the door for every one of us to go into heaven. So because of that, everybody that understands that they have a need, regardless of what that need is, will be able to get into even based on Jesus’s righteousness…When people say, can a homosexual go to heaven? Or can a Republican go to heaven or a Democrat go to heaven or a good person, whatever? Bottom line is, in my view, since I’m a Christian, everybody goes to heaven because Jesus opened the door for them…Everyone’s in need. Everybody needs healing in one area of their life or another.”

When it comes to individuals in the religious community, who might be self-righteous and non- accepting of all people, Haggard says Christians should be neither arrogant nor blameful.

“A Christian is saved by grace through faith, which means, they have no reason to be arrogant and no reason to blame. Christians should be known by their love for one another and their love for mankind. So Mother Teresa had it right. Some of our ideologues have it wrong. That’s why I teach continually, everybody should read their bible on their own…Religious teachers throughout histories have distorted the scriptures for their own purposes.”

As for the political realm, Pastor Ted believes that the repeal of Don’t Ask Don’t Tell was a great thing for the country because it was stood up for equality. Haggard says the American constitutional system works well because it respects people and does not allow a member of Congress to use the Bible to make law.

“What just happened with Don’t Ask Don’t Tell, I think that was a good step in the right direction toward equality and other people would see it differently, but now if the military were a church, I would say different things should apply. But since the military is a Constitutional institution, the Constitutional principles need to apply…We accommodate religion. We encourage religion, but we don’t endorse religion. So I think we’ve done a good job with a healthy constitutional republic that respects people and at the same time does not let somebody bring their bible into the Congress and say, ‘Since the Bible says this, than the law should read that.’”

The photo provided for this piece is credited to
TLC and Charles Corbin.

Pastor Ted Haggard has formed a new church and ministry in Colorado Springs, Colorado called The St. James Church. It’s the town he left of after people learned of his double life. The premiere of Ted Haggard: Scandalous debuts Sunday night on TLC at 10:00 PM EST.

11 Replies to “Pastor Ted Haggard: His Trials and Tribulations Call for TLC”