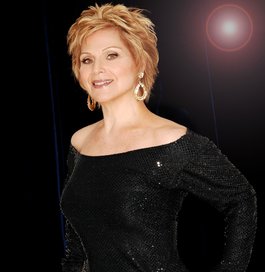 Singer, songwriter and actress Roslyn Kind loves to sing and make people happy. For almost 50 years, though by looking at her you would never know it, she has had a multilayered show business career. One of her earliest performances was at the famous Persian Room at the Plaza Hotel, in New York City, at the end of the 1960s. She was only 19 at the time. Years later, in 1977, she performed on Saturday Night Live.

Ms. Kind has performed in a variety of Broadway and off-Broadway productions, had residencies in Las Vegas, sang in concert with her famous sister Barbra Streisand and now is releasing new music. The words talent and longevity define Roslyn Kind’s career.

Her new song Save The Country is one of her latest offerings. Roslyn is out to share a message of love and equality. Listening to Roslyn, you come to understand just how sincere and spiritual she is, while being a fun and upbeat person at the same time.

You can read the highlights and listen to the entire 30 plus minute CYInterview, with Roslyn Kind, below:

Focusing on the message in her music, she tells us this:

“I want to get rid of this hatred, this chaos that we’re all going through and if I can do it, my one voice, if I can instigate a movement of people looking within and coming to terms with if you love yourself, you can love others; we can have a peaceful, wonderful world. And I’m only one little voice, but to me, that’s become the importance in my life right now.”

Speaking about her new song Save the Country, Roslyn Kind tells us this:

“I am hoping it will open people’s eyes. I don’t attack it in a negative way. It’s about love, what we need to do to have love. We all have to come together.”

Sharing insights into her family including her famous sister Barbra Streisand and her mother, she says this:

“I want to thank my mother, my sister, my family because, I think we’ve all grown into good people. My mother always gave to charity. My mother always had a charity box in the house no matter how much we did or didn’t have. And we came from a, you know, middle-income family. We didn’t have a lot. But she always stressed that and I grew up in a melting pot of Brooklyn, New York.”

Her sister Barbra Streisand was in the news recently for some comments she made about Michael Jackson. Roslyn says she was unaware of the comments, but she offered this about her sister:

“You know what, I really, I didn’t hear the statements. I wasn’t watching. But I believe lots of times my sister gets misquoted.”

In the past, the press has compared the two sisters. Roslyn says it was annoying in the beginning to get compared to her sister, Barbra Streisand, but as she developed her own persona and career path, it got easier:

“You know what, in the beginning because I didn’t really have a persona established of my own, but I also understood it and you can’t be compared to anybody better. You know it’s like, and the bottom line, the things that are similar are our genes. That can’t be helped. You can’t change genes. I, over my own growth, I am a different person than my sister. I perform differently than my sister. I loved sharing the stage with my sister. I look up to her for everything she stands for, her values, her talent is monumental and I was the president, I was the first president of her fan club.”

Roslyn says she would love to perform again in Las Vegas. Reflecting on one of her favorite memories performing in the Entertainment Capital of the World, she shared this:

“I would love to come back. I remember my first Billboard in front of the [Las Vegas] Hilton. There was Elvis Presley, may he rest in peace, he was starring in the main room and on the side, introducing a new star to Las Vegas, Roslyn Kind.”

You can learn more about Roslyn Kind and her new song Save The Country at her official website clicking here.

You can purchase Save The Country on CD Baby clicking here.

2 Replies to “One of a Kind: Spiritual, Reflective and Talented, Roslyn Kind Has Released New Music and is Looking to Bring the Country Together”