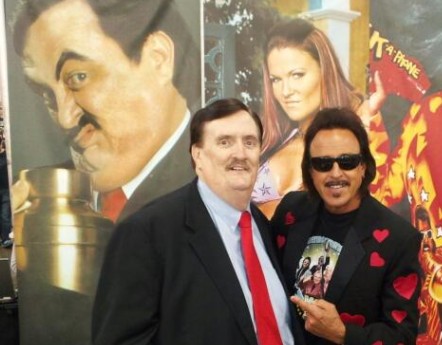 On WrestleMania weekend, we remember William Moody. Better known as Paul Bearer, the late professional wrestling manager’s birthday was yesterday. He would have been 66.

Mr. Moody died in 2013. Gone too soon at the age of 58, he is arguably one of the most famous managers in sports entertainment history. With a managing resume in the WWE including Undertaker, Mankind, Kane and Vader among many others, he was arguably the last of his kind, when it comes to managers. Going down in pro wrestling history, with the likes of fellow past CYInterview guests Bobby “The Brain” Heenan [see here] and Classy Freddie Blassie [see here], his mortician-urn-carrying character lives on. Interestingly, in real life he was actually a funeral director.

If he were alive today, Mr. Moody would be watching WrestleMania, if he was not working the event in some capacity. He was a huge professional wrestling fan. Pro wrestling was his life. If you had the honor to get to know William, you would have found that he was one of the friendliest individuals you would ever come across. Throughout my more than 10 years of knowing William, he would always show interest in what I was up to, as well as staying in touch with me. He loved the Internet and was always just one instant message away.

The photograph above is of William Moody as Paul Bearer, pictured left, and with another legendary wrestling manager, “Mouth of the South” Jimmy Hart, pictured to his right.

Below is a reprint of our 2013 article. You can read the highlights and listen to that 2013 CYInterview below:

As mentioned previously, we are taking the opportunity to revisit some of my favorite people from the world of professional wrestling. You have already heard from former WCW Superstar The Stro [see here]. Now, we hear from one of the greatest managers in pro wrestling history, Paul Bearer. He has been part of professional wrestling since the 1970s and is best known for managing WWE Superstars The Undertaker, Kane, Mick Foley and Vader.

Today, many fans refer to him by one of his other wrestling names. That would be Percy Pringle. This year, he is receiving the Lou Thesz Lifetime Achievement Award at the annual Cauliflower Alley Club in Las Vegas. It is one of the biggest pro wrestling events of the year, with many of the legends and stars of the sport coming together. Beyond his talent, Percy is one of the great historians and fans of pro wrestling. Currently signed to a WWE Legends contract, he still does various things for World Wrestling Entertainment.

By reading the highlights or listening to the entire CYInterview below, you will hear what one of the greatest pro wrestling managers and personalities is up to: