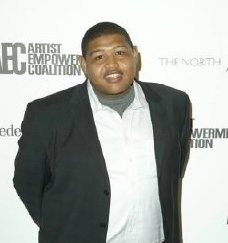 Omar Benson Miller sets the record straight that he is not related to Forest Whitaker even though many think he is. Can you see the resemblance?

Imagine being told that your look resembles an Oscar winning actor and the world is convinced you must be related? Well, it’s not the case with Omar Benson Miller who everyone thinks must be related to Forest Whitaker. Even the Wikipedia editors noted that he must be his nephew right? Not so. Omar Benson Miller has continued to gain his notoriety in recent years playing across from Richard Gere, Susan Sarandon, and Jennifer Lopez in Shall We Dance as well as Halle Berry in Things We Lost in the Fire. This fall he has two movies coming out in the span of two weeks as he continues to grow as a supporting actor.

Chris Yandek: You’ve had some very memorable supporting roles in Shall We Dance, Transformers, Things We Lost In The Fire. As you continue to move towards bigger roles, what has been the most important thing for you with the time you’re been on screen?

Omar Benson Miller: “Is honesty easily. I want to be authentic. I want people to see my character and not see me. I want them to see my character and see a piece of a part that’s completely independent from who I am. I want it to be honest. I want it to be truthful. I want people to identify with the characters that I play on screen to say, ‘You know what? I know a guy like that. Yeah. That’s real. That guy is a real guy.’”

CY: So you’re on this set in 2003 in Shall We Dance with Richard Gere, Jennifer Lopez, and Susan Sarandon. Was this the turning point for you when you realized you were at a new level?

OBM: “Yeah. That was a definite turning point in my career where I got sit to back. I bumped into Susan Sarandon. I literally bumped into her because she’s pretty short. I bumped into her and she actually knew who I was from the movie 8 Mile and it made me feel so special. I said, ‘Wow! Susan Sarandon knows who I am.’ I’ve been watching Susan Sarandon as long as I can remember. I loved her work and it was just such a great compliment. And all of those giant stars were so easy to work with. They were so friendly. Richard Gere, he’s just one of the nicest guys you’ll ever meet. After you meet him, you’re really happy about his success because he’s a good dude. Jennifer Lopez, I was expecting a diva and that’s not what ended up happening. When I first met her, she introduced herself. She’s like, ‘Hi. I am Jennifer!’ I was like duh. Everybody in the world knows who you are. It was great. Everybody was so much fun to work with, Stanley Tucci. It was great. It really helped me. Every time you work with somebody who is on a higher level than you’re on it helps you because you strive and you reach and you try to meet their energy or surpass it.”

CY: On September 26th, Miracle at St. Anna will be released in theaters nationwide. The film follows four black soldiers during World War II. This is kind of different than many of the other roles you’ve done. Did you have to make any adjustments in the acting business with this one?

OBM: “I had to make every adjustment you can think of. Primarily I had to lose 50 pounds. I had the meeting with Spike and I told him I almost pleaded with him to do this role. And he said, ‘I want you to do it. Weight got me nervous. I need you to lose weight.’ I was like no problem. From then it was on. I had to change my diet. At the same time I was doing research because really I wanted to be authentic to individuals who really served in the army, at that time the Buffalo soldiers or any soldier in World War II. You want to make it as real as possible. I think it came together well. Everybody is going to see really soon this is just a wonderful film. Wonderful, important film.”

CY: There was some concern on the part of some of the survivors that the film wouldn’t be historically accurate. Is it difficult among actors and the director to get something 100 percent accurate?

OBM: “Without question. I was speaking to the director of The Express the other day, Gary Fleder, and we were talking about the difference between the truth and the facts. It’s not the same thing by any means. Truth and facts are totally different animals. Miracle is a fictional novel based on a bunch of different conversations the author had with real survivors of World War 2. So it’s like a compilation of true events, which creates the fictional event, which is interwoven with some real events kind of like Forest Gump. In that, you’re bound to get a couple things wrong, a few small details. I know great things were done by every department to make it as authentic as possible.”

CY: So I am guessing you weren’t surprised then when Spike Lee and Clint Eastwood have a disagreement about the history of their two World War 2 movies?

OBM: “Yeah. I wasn’t surprised whatsoever. Spike, if he is nothing else, he’s honest. He’s a controversial individual and he’s going to say what’s on his mind. I was a little surprised Mr. Eastwood fired back the way he did, but either way it goes both guys are great filmmakers. The proof will be in the pudding. You know?”

CY: When you have two big directors who’ve been doing their stuff for a long time I am not surprised what anyone says anymore.

CY: The following week, The Express comes out on October 3rd and is a prolific look at Heisman Trophy winner Ernie Davis. Many are already saying this isn’t like other football films in the past. How is it different?

OBM: “Gary Fleder, the director of the film in particular wanted to make sure he didn’t remake a Remember The Titans, a Varsity Blues, a We Are Marshall, any of the movies in that vain. One of the primary differences that The Express has is it’s a story that’s greater than football. Football is almost the backdrop for what the story is dealing with; with this historic individual. What it’s dealing with are important issues that plagued the country at the time and unfortunately or fortunately depending how you look at it are relevant today with the political scenario, with the potential first African American president. It is interesting to parallel somebody the first African American Heisman Trophy winner to see the things he had to go through and to see 40 to 50 years later we are still dealing with race in this country. This movie will be relevant. I think that football would be a backdrop, but for those who remember this team, it will ring very…very true. It’s not a campy film. It’s a very honest film. In that sense there is not the happy ending so to say.”

CY: How accurate is this film compared to what happened with the real life of Ernie Davis?

OBM: “This film is pretty accurate. I think the story at times crunches together certain events that may have taken place over a long period of time, but for the sake of telling someone’s entire life story in the span of two hours is very difficult to not nip and tuck a little bit. Historically you’re gonna see things that are on point. You’re going to see things are unfortunate that happened and there are gonna be some ugly images. Yet at the same time the moral of the story that people can overcome and be greater than the odds that are against them will ring true.”

CY: You are Forest Whitaker’s nephew and the resemblances are very clear. Do people all the time that know you are an actor say you must be related to him?

OBM: “(Laughs) Non stop, but let’s get it straight, this is something that’s on Wikipedia and I don’t know who put it up there, but I need to dispute it openly, I am not related to Forest Whitaker. Forest is a friend of mine. He is a great guy. I learned so much from him because at one time we were going to make Fat Albert together. He was directing it and I was gonna play Fat Albert. And you know what? Forest and I we’re the only people who think we don’t look alike yet the world is convinced I am a younger version of him and I am absolutely fine with that.”

CY: Well, the fact is that Wikipedia is not accurate and can be edited by anyone, but the problem with that is this was picked up by five, ten other websites.

OBM: “No question. Man Chris, I am telling you man, people on the street come up to me and ask about Forest and my relation to him and that must’ve helped me get in the industry. I wish. I had to beg, borrow, and steal to get in this spot.”

OBM: “Who knows…who knows. We’re both from Southern California so it’s possible.”

CY: Finally, tell me something about you we should know?

OBM: “A lot of people say this to me. I met Allen Iverson this weekend and I also met Ridick Bowe the ex heavyweight champion. Both of them said, man you’re tall in person. I guess in the film I don’t come off my true size, but I am 6’6 about 290 pounds. I am a real giant. So don’t be surprised when you look up and see my nose hairs.”

You can find more information out about Omar Benson Miller at his official My Space page: http://www.myspace.com/omarbmiller