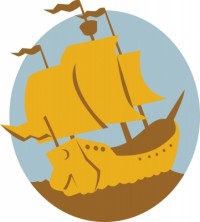 Try to imagine a heavily-sailed wooden ship, four decks high, carrying 100 cannons, and weighing 250 tons when fully loaded. That describes the “floating castles” that carried one-third of the silver produced in America to Manila, in the Philippine Islands, where it was exchanged for rich goods coming from as far away as India. These goods included silks and spices, gems, porcelain, inlaid chests and furniture, ivory items and painted screens.

The galleon trade route constituted the longest voyage ever made without landfall, the longest commercial route in history, and the commercial route used for the longest time. A galleon on this route was often referred to as the “Nao de China,” owing to the origin of many of the products it carried. These exotic items could be re-sold for 3 times their value.

The profits were great, but so was the danger. Particularly dangerous was the return route to America. The northern Pacific was so far uncharted, and five failed attempts to sail back to America had already been made. King Phillip II was interested both in evangelizing the Philippines and establishing a trade route which would avoid conflict with the Portuguese, who had already achieved a highly remunerative spice trade by their presence in the Moluccas Islands.

In order to assure success, he appointed Commander Miguel Legazpe to lead the fleet, but he also appointed Fray Andrés Urdaneta as a special advisor. Experienced and knowledgeable, Urdaneta was already in his fifties and had long since left the sea faring life in favor of the convent. Nonetheless, he obeyed the king and joined an exploratory mission to the Philippines which ended in the founding of the first Spanish city, Cebu city. Once this was accomplished, Legazpe decided to send Urdaneta back to Mexico in the galleon San Pedro, placing his own 18-year-old grandson at the helm.

The fleet left the Philippines on June 1, 1665, propelled northward to Japan by monsoon winds. Urdaneta’s calculations enabled them to take advantage of the Japan Current in order to sail across the Pacific to the coast of California. From there, they sailed down to Acapulco, where they arrived on October 8, 1665. The treasure-bearing galleons followed this route and timeframe for the next 200 years. In fact, the route is still used by ships today.

Urdaneta is an unsung hero of naval history. After landing in Acapulco, he reported first to the Audiencia in Mexico City, and then shipped out to Spain, where he reported directly to Phillip II. After that, he returned to his Augustinian convent in Mexico, where he died three years later, on almost exactly the date that he had completed the famous Tornaviaje voyage. Thus it was that year after year, from 1665 to 1815, heavily laden galleons plied the seas between Manila and Acapulco. Mule trains then took the goods overland via Mexico City to Veracruz, and from there they were shipped to Seville.

The voyage continued to be dangerous, even once it was charted. Fleets of as many as five ships made the trip once or twice a year. Of the 130 ships that attempted it, only 100 actually arrived. The remainder was either obliged to return (with damaged goods and ships) or they fell into the hands of pirates, or sank—usually close to the coast of the Philippines shortly after lifting anchor. Because the galleons were heavily loaded and in the best of cases difficult to maneuver, they often failed to navigate the ill-marked channels which would admit them to the open sea.

The voyage was also fraught with the danger of dying of scurvy, the main killer of the 50% of the crew and passengers who ultimately debarked in Acapulco. It is amazing that Urdaneta and the China Poblana, two of the most famous passengers, even survived. But the China Poblana is part of the cultural history of the sister nations of Mexico and the Philippines, and its telling must wait for another day.