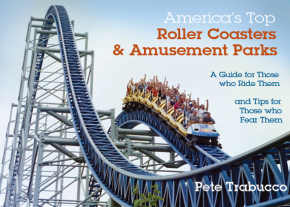 When he was about six years old, Pete Trabucco was made to ride a rollercoaster in famed Coney Island. It would take him almost 40 years before he could bring himself to get back on the popular yet scary amusement park ride. When his daughter was born, Pete began riding rollercoasters again, going on to become a knowledgeable expert on them – he’s ridden over 300 roller coasters – as well as amusement parks in general. He’s written the book, America’s Top Roller Coasters and Amusement Parks.

“The best one would be on the front cover of my book, which is Millennium Force, Cedar Point, Sandusky, Ohio. It’s a great roller coaster. It is pretty high. It’s 300 feet high. But what makes it so good is…re-ride ability is the basis to why a coaster is good or bad. If you’re on a roller coaster and after you get off you’re like, I don’t want to ever go on that again, my back, my neck hurts. It was too rough. It was too short. The line was too long or whatever. That’s not a good sign for a good roller coaster. What really is, do I want to run back on the que line? Do I want to do this again immediately? Do I want to experience that again?”

Amusement parks have been impacted by a rollercoaster economy. Trabucco says two major theme park companies, Six Flags and Cedar Point, made necessary changes and are doing better today. He added that amusement parks have been doing different things, including offering season passes at discounted prices or with more benefits attached.

“One of the actual organizations, Six Flags obviously if you’re familiar with that, they have a running of about 12 amusement parks around the country and five water parks. At one point, they were actually a lot bigger. They had to sell a lot of the parks. They had to be able to recoup a lot of the money that unfortunately due to the economy was lost. I’m proud to say right now, with the changes they made, they had over 23 million guests last year…Cedar Fair, which is another big operation and that’s where Cedar Point is, has 11 amusement parks and four water parks and again, they had to see some tough times, but they’ve actually expanded over the years and have done quite well. I think their revenue was close to a billion dollars.”

Parks are adding new rides, including coasters, to entice people to come. Trabucco says some rides can now accelerate up to 124 miles an hour in less than three and a half seconds. However, though bigger operators like Six Flags and Cedar Point are making it through these challenging economic times, smaller parks have closed due to the economy.

“They’re still giving you those really first time roller coasters that thrill and they’re trying to beat the next roller coaster. We’ve got rides now that go from zero to 124 miles an hour in less than three and a half seconds. So we’re still I guess expanding that envelope as they say, but they’ve had to suffer. A lot of the smaller amusement parks closed down or basically just cannot compete. One of the ones that comes to mind is where the Cyclone is in Brooklyn, which unfortunately, Astroland had to close down a year or two ago and that was directly because of the economic impact.”

“There are some parks that you worry about. Basically like Rye Playland, which is a great old park in New York in Rye, New York. That’s been on the chopping block for years. They just might be closing down for good. So these type of parks, they’re smaller, the economy basically in the middle of New York might not be the best for what you doing there…Of course we already mentioned Astroland, which closed and unfortunately has not been replaced to the level that that park was in Coney Island.”

In closing, Pete Trabucco notes there are many ways for families to save money when going to amusement parks. One way is to book early at one of the hotels linked to a particular park.

“You can save money by going to these different hotels…When you go these parks, always book early because if you book late, the airfare is gonna be high and a whole bunch of other things are gonna happen that basically you didn’t expect…You want to be able to book in advance and make sure that when you’re in the park that you go during certain hours. Everybody goes during the midday. It’s the worst time to go in an amusement park. You want to go early or late because that way the crowds have already left from all over the place…Know that your money’s gonna go far with the bigger amusement park programs.”

Pete Trabucco wanted me to let everyone know all proceeds from his book go to charities including http://www.friendsofjaclyn.org/ and http://www.curesearch.com/

One Reply to “Not Just Coasting: Pete Trabucco on Economy’s Effect on Amusement Parks”