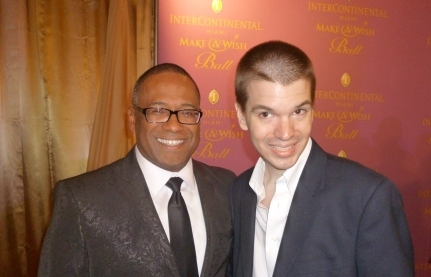 Over the last number of weeks we have brought you coverage of the 18th Annual Intercontinental Miami Make-A-Wish Ball. If you haven’t already, you can check out our CYInterviews and encounters with Christian Slater [see here], Melanie Amaro [see here] Elaine Lancaster [see here] and Wayne Newton [see here]. Of greater importance, however, than the glitz, glamour and entertainment, the main reason for people coming together at this event, was to support an organization geared to granting the wishes of children dealing with formidable challenges.

President and CEO of the Make-A-Wish Foundation of Southern Florida, Norman Wedderburn spoke with me on the red carpet about the accomplishments of his chapter of the Make-A-Wish organization. You can listen to the CYInterview and read the highlights below:

This year’s ball raised over $1.6 million for the Southern Florida chapter. Mr. Wedderburn told us the event takes almost a year to put together. When speaking about what his chapter does as part of the Make-A-Wish organization, he told us:

Norman says last year his branch alone granted over 500 wishes, making it the fifth largest for the entire organization:

“We’ve done everything from I want to be a model to I want to meet the present to I wanna a bedroom redo to everything you can imagine we do. … The South Florida chapter of Make-A-Wish has granted over 8000 wishes in its 29 year history. Last year we granted 546 making us the fifth largest wish granting chapter in the entire world.”