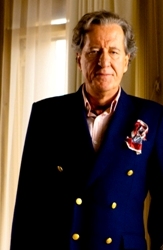 With an acting career spanning decades, acting triple crown winner Geoffrey Rush is not slowing down when it comes to entertaining and enlightening us. Most will recall his role in the 2010 Academy Award winning movie The King’s Speech. He played a speech therapist, in service to King George VI, played by Colin Firth. After that role, the Oscar, Tony and Emmy award winner met the King’s daughter, Her Majesty Queen Elizabeth II, last year.

Through his performances and accolades, Mr. Rush continues to spread awareness about the Australian acting and film industry. His good works have not gone unnoticed. In fact, the multi-award winner was named 2012 Australian of the Year.

Playing a variety of roles, from a pianist in his 1996 Academy Award win for Shine to being in the Pirates of the Caribbean franchise, Geoffrey Rush is most certainly an actor for all seasons – a true pro.

In our CYInterview, Geoffrey speaks about some of his acting experiences, experiences all aspiring actors and dream seekers can learn from. Among topics we discuss are whether we will likely see him sing and win a Grammy, what it was like to meet the Queen and, of course, his new movie The Eye of the Storm, slated for wide release, in America, on September 21st.

You can read the highlights and listen to the complete 20 minute CYInterview below, with the great Geoffrey Rush:

The Eye of the Storm is a movie based in Geoffrey Rush’s native Australia. In it, he plays an actor whose career is on a downward slide, while he deals with a mother near the end of her life. His mother, played by actress Charlotte Rampling, is not very supportive of her son’s career. In contrast, in real life, Geoffrey says his mother greatly supported his acting goals. He talks about that and the character, Basil, he plays in the film:

“As I became an actor in my early 20s, it was a little unheard of at that stage in Australia. We were relatively on a global level a bit of a cultural wasteland to a certain degree. So the idea of actually going into a profession as an actor seemed highly unlikely but circumstances allowed that to happen and my mother was very supportive of that…I had an interesting conversation with my mother one day when she revealed to me that she was always in her youth, she always hoped that she could’ve been, and she might’ve been influenced by American movies, I don’t know.

She said, ‘I would have loved to been a dancer in a troupe in a variety show and be in the company of all those kinds of people.’ Which I thought was quite interesting because I have very, very fond memories of my mother from my childhood. She was a great jiver you know and from when I was seven or eight, I can remember her always rolling up the rug and hitting the floor with her various dance partners and having a great sense of rhythm and I hope I’ve inherited a few of those genes… Basil is trying to assess where did his adult life go horribly, horribly wrong, which is why I think he makes the journey back to the country in the course of the film to his childhood home to see where things might’ve gone off the rails.”

With the setting for The Eye of the Storm based in Australia, Geoffrey says it means a lot to have a project filmed in his homeland:

“It means a lot. I mean I’ve tried to interweave, you know I started, my first major sort of Australian film roles happened in the mid 1990s when I was in my mid 40s. I’d spent most of my time, you know 25 years in the theater before that. So to suddenly find myself in a position where you know a reasonably good number of roles and quite diverse roles occurred and I’ve been trying to interweave them in and around international offers, it’s always that much more fascinating to go back and play out within the nuances of the psyche of your own landscape, your own country, your own place.”

As someone who did not achieve film success until his 40s, the now multiple award winning actor faced challenging circumstances but never gave up. To aspiring actors and others chasing a dream, Mr. Rush gives a fascinating answer to those wanting to achieve their goals:

“I’ve probably noticed just more recently, I’ve been doing more theater again for the last three or four or five years so, and particularly within Australia and some of those productions have made forays into New York. We came here with Exit The King to Broadway a couple of years ago and last year to the Brooklyn Academy and that was very exciting. So I’m now in a position where you know even on a film set, I look around and think, wow, I’m sort of pretty much the oldest guy here now; you know what I mean. It sort of sneaks up on you very quickly.

But I find it very stimulating and intriguing to be working with people in their teens, their early 20s, into their 30s to sort of see it’s a different context you know. I mean even not just the political/social differences that exist now, that the technological differences are huge in terms of means of communication and stuff. So I do get asked a lot by younger people you know what advice can you give and you know, there is no easy desk calendar aphorism, but I always say you know, remember for me if this means anything for you, being an actor is putting yourself into a state of imaginative play. It’s not about red carpets. It’s not about career movements. It’s not about celebrity you know and all of the trappings that tend to clutter up what the job description fundamentally asks of you.

You have to get to know your own imaginative parameters and develop your skills and what you can express vocally and physically. There’s, you know, a craft involved. At the same time I suppose I distill that down to, you know, follow instincts. Somewhere in the back of your mind there’s always gonna be a very strong instinct that helps you make decisive moments in the creation of your work or in the maneuverings of your career. There’s always gonna be moments where you’ll hit crossroads and have to make a decision is it the right fork or the left fork and be on high alert to sometimes take risk, sometimes find assurance, sometimes strengthen and develop something that’s already there. There’s a lot that needs to be processed.”

In 2010, his role as a speech therapist and friend to King George VI in The King’s Speech earned Geoffrey another Oscar nomination, this time for Best Supporting Actor. Last year, he had a chance to meet the daughter of King George VI, Her majesty Queen Elizabeth II. He looks back on that experience:

“That was an interesting experience because at that time I was in preparation to play Lady Bracknell in The Importance of Being Ernest. Not that I was gonna end up playing Lady Bracknell as the queen, but by coincidence I was sat at luncheon next to her majesty’s chief lady in waiting, who was a hoot. She was a great luncheon companion and you know as an actor, I like being in those unusual circumstances. It’s not every day you get to be invited to government house and all of their attendant formalities of that to be able to observe how that echelon of society works. So I was able to you know have a very rare and enjoyable experience and kind of in the back of my mind keep my antenna on high alert to see whether there was some little glimpses of truthful behavior that came from that particular class of society.”

By coincidence, in his 1996 Oscar acceptance speech for Shine, he talked about the dream dinner party and those unusual circumstances. He reflects back on what his Academy Award means over 15 years later:

“It becomes an adjective that becomes, in the media, attached to your name, but I don’t think it should ever be the key part of your calling card, I mean in brokering a new project or whatever discussions as random as they might be with other creative people who might be suggesting an upcoming project or a daring step to say, ‘Hey. Wouldn’t it be great to have a look at doing this?’ As is what happened with Fred Schepisi in Eye of The Storm. He said, ‘Look, I think I got the finance together. You should really take a good close look at Sir Basil Hunter and I think Judy Davis is on board.’ They’re the key processes I think.”

There are only a few people to have won the four major entertainment awards: Oscar, Emmy, Tony and Grammy. One of those individuals is past CYInterview subject Whoopi Goldberg [see here]. Currently, Geoffrey owns three of the four. He does not have a Grammy and he has no future plans to try to complete the award foursome. However, some of Mr. Rush’s fans would love for him to take a go at singing.

“I couldn’t even tell you, I think there’s only a handful of people, I know Sir John Gielgud is involved in that and he probably got a Grammy because he probably recorded, he did a Shakespeare compilation show many, many decades ago for Ages of Man…But I don’t think you can set that up as a career path. You know, I, it’s unlikely that I would ever get into a recording studio as a singer, but in terms of spoken word, I don’t know, it would have be a particularly stimulating project. I’m not actively pursuing it to kind of fulfill that crazy idea of a challenge.”

As the 2012 Australian of the Year, Geoffrey is only the third actor to receive that honor. He contextualizes what it means to him:

“I suppose if I really put into context, it’s been an accolade in Australia that’s happened since 1960 and more often than not I suppose it’s awarded to someone that’s already prominent to some degree in public life. But in that 52 year history, there have only ever been two actors from film or theater. The first being Sir Robert Helpmann who was not only a notable internationally recognized ballet star, but also Shakespearean actor and probably known to a younger generation as the child catcher from Chitty Chitty Bang Bang.

And the second was Paul Hogan back in the mid 80s. So in terms of let’s say how artistic endeavor or the arts industry or artistic life in Australia, it’s generally not regarded as the highest goal to strive for. You know even though we have an extraordinary history of great performers and internationally recognized people etc, etc. It’s been good for our industry to raise the credibility and visibility by having an artist given that particular award. So I sort of accepted gratefully in that respect.”

The Eye of Storm comes to a wide release in theaters in America September 21st.

You can find out more about Geoffrey Rush’s Australian of the Year award here.