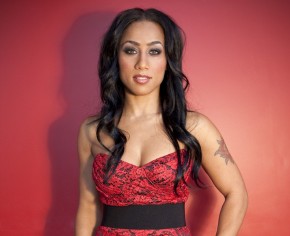 In recent years there’s been something of a new relationship mini-trend; women of reality television dating professional athletes. One such case is that of Nicole Alexander. Better known to some as Hoopz from VH1’s Flavor of Love and I Love Money, she has found her knight in shinning armor. Nicole is currently dating Shaquille O’Neal, who last week grabbed sports headlines announcing his retirement from the NBA after 19 years.

Wondering what the future holds for Shaq and his current girlfriend, we welcomed Ms. Alexander for a CYInterview on her life, as well as some insight into why Shaq retired and what the future might hold.

Off the bat, Nicole told us something we have heard since we were kids, never judge a book by its cover.

Ms. Alexander believes she is very approachable and has no ego. In reflecting on the VH1 reality TV celebrity she’s garnered, she says it wasn’t a goal or something she was looking to accomplish. Additionally, Nicole believes the state of reality television has become watered down and that originality is lacking.

“Reality television for me wasn’t like, it was something that I said I wanted to do. It wasn’t something that I aspired to do or said, ‘Oh I’m gonna send in a video or do this.’ I call it lucky. I was just in the right place at the right time…The way that I got involved is a lot different than people wanting to do it…I’d do it all over again the same exact way, wouldn’t change anything…I think reality shows, they’re kind of washed out to me. I’m wishing for another good show to come on. They just got so similar and they’re getting watered down because they’re doing the same things. They’re taking different people and doing it.”

Perhaps, the biggest question people who gain celebrity from reality television have to ask themselves when the show ends is, what’s next? After her VH1 run ended, Nicole says she didn’t take everything that came her way. For Ms. Alexander, it was about making the right choices for herself professionally and doing things of substance. She turned down several different shows.

“For the longest I’ve always ended up in the media in a negative way, sometimes good, mostly bad. I think that’s just a lot of people…Everyone’s going to have their own opinion. Oh, your 15 minutes is up. You gotta deal with it. It comes with the territory…They’ve said everything that they possibly could. Right now it’s like, I’m happier. I’m in the best place that I could ever be in my life. Depending on what you do afterwards, I did not take everything that came my way as far as magazine covers or different shows. I was offered to do several different shows and I turned them down. I just have great intuition about things or whatever. If it’s not of like substance to me, then I think why do it.”

A reality show could be on the horizon in the near future for Nicole and Shaq. Ms. Alexander recalls how they started dating when a mutual friend came up with the idea. It would seem Ms. Alexander and Mr. O’Neal are a fun and easygoing couple. I told Nicole it seemed they go well together. She agreed.

“There’s nothing that we can’t do is what I say. Now that he’s retired, he has several offers coming in. We have several offers coming in…We have been approached for reality shows and all kinds of stuff like that…We mesh together very, very well. That was the ironic part about it. You know what I mean? I’ve known him through the business for a while, but our initial date was through a mutual friend that actually got us in contact with one another…I had never looked at him that way. He was just a big guy I grew up watching. You know what I’m saying? Always knew he was funny…He was just such a gentleman. We laughed. We played. We played fight. It was like, oh my gosh this guy is like me, I’m like him…We’re both super happy. We have fun and that’s the most important thing in any relationship.”

As his girlfriend, Nicole has had the opportunity to get an up close and personal view of Shaquille O’Neal. She saw him struggle with a right Achilles tendon injury that led to his retirement from the NBA last week. She explains that he can’t run correctly today. Ms. Alexander witnessed his issues with the nagging injury. She says he tried to hide it from people because he didn’t want to let anyone down. During challenging times, Nicole tried to keep his spirits up. At the end of the day though, one of the most dominant centers in NBA history knew his playing days were up. Nicole provides us with a detailed analysis of why he retired:

“Your body shuts down on you and he has this injury, which essentially the whole part of walking right or any type of agility. Today, he can’t even, he can’t run right. He can’t lift that leg up off the ground. It’s almost like a rubber band and then once you pop it, it doesn’t have that elasticity anymore. There’s nothing there. He just got home like, ‘Nicki, man. I’m scared.’…Only you know what’s really going on with your body. You know what I’m saying? He tried to hide because he wanted to, he didn’t want to let anybody down. He did everything he could to play as long as he could…A lot of people don’t take into consideration his size with an injury like that. It’s hard. He is a giant. But he suffered with it. It hurt him. He sat at the table for hours and I really just did everything I could to get his spirits back up, but it was hard for him, very hard for him and he knew. He knew it was the end.”

Nicole went so far as trying to work with Shaquille on the basketball court. This was during a rehab process testing the status of the injury to see if he could get back to playing round ball. However, it was not to be. Though it might have been possible Shaq could’ve still contributed to a NBA team, she says he doesn’t believe in doing something halfway.

“Not that he was giving up hope on it, but once you see him let go of it, it’s like, ok, this is real. We did everything we could to try to get him back even to be out there. We worked on plays in the gym and everything. I’d be up underneath him. I might be little, but I am strong. I tilt him up. I put pressure on him. I’d make him go to his right side and he just, there was nothing they could do. It hurt him…If you can’t put in your best ability, well you just walk out of the game and that’s exactly what he did.”

If you do some quick online searches, there are various rumors about Shaq and Nicole like: They were engaged. They called off their engagement. They had broken up. Nicole told me the reality is they are currently boyfriend and girlfriend but nothing more. If anything else happens, she’ll let everyone know.

“That is my boyfriend. I am his girlfriend…Trust me, the world will know if it goes any further.”

With Kim Kardashian now engaged to her pro basketball beau, Kris Humphries of the New Jersey Nets, Nicole tells us she has met Kim and Kris. She wishes them nothing but the best. She says Ms. Kardashian is someone you just want to grab and kiss.

“I’ve met Kim and I’ve met Kris. They look adorably happy together. She’s a doll. She’s a hopeless romantic. So I hope that her wedding plays out just like the fairytale that she’s always dreamed of. I just want the best for her. I love her to death. She’s a great person. She’s so loving and kind, very, very approachable. You just want to grab her and kiss her. She’s one of my favorites and I hope that they live happily ever after forever together and happy.”

For his retirement announcement in Orlando, Florida last week, Shaq invited hundreds of family, friends and members of the media to attend an event where he said goodbye to professional basketball. Nicole says she helped him prepare for the big event and everyone had a blast.

“We worked on the speech together. We put them on cue cards for him and reenacting the whole thing over and over again was super funny. We had a blast with it as you can imagine and you know just making sure his outfits are right. The craziest thing is, no one would’ve expected it, we had a wardrobe change right, I’m talking the minute right before he walked out there. I had to run up and get another shirt and go get another pocket tie. It was crazy.”