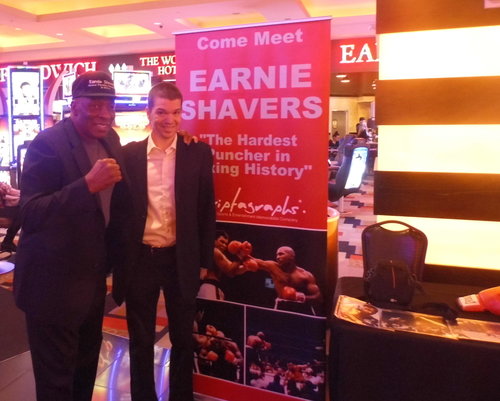 Yesterday, boxing legend Earnie Shavers died. He was 78 years old. The pugilist was considered one of the hardest hitting punchers in the history of the sweet science.

Mr. Shavers had an impressive boxing record of 74 wins, 14 losses and 1 draw. His career included fights against Muhammad Ali at Madison Square Garden for the heavyweight championship, two bouts with Larry Holmes and a contest against Ken Norton.

Away from the boxing ring, Mr. Shavers had a connection to the Rocky movie franchise. While auditioning for a role in Rocky III, Sylvester Stallone asked him to really punch him. After getting hit, Mr. Stallone reportedly vomited. That cemented Earnie’s reputation as a hard punching boxer, even in the realm of Hollywood.

In recent years, Mr. Shavers was known to make appearances in Las Vegas, signing autographs and meeting fans. In 2017, we met the boxing legend at the Planet Hollywood Las Vegas Resort and Casino, during one of those signings. You can see our photograph together, above.

In 2018, Earnie joined us on CYInterview, for a discussion about his career. You can find that CYInterview by clicking here. That same year, Mr. Shavers was inducted into the Nevada Boxing Hall of Fame at Caesars Palace. Though many feared his punches in the ring, he was a gentleman outside of the squared circle.

RIP Earnie! You truly left your mark on the world of boxing.