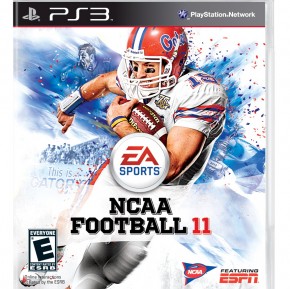 I know what you’re all thinking. Those dog days of summer are taking forever to end. The only difference is many college football fans have already started their season even though the first kick of the ball in the air hasn’t occurred.

The college football diehards are picking up expert Phil Steele’s yearly publication that breaks down all of college football and the sports video gamer in you can’t wait for tomorrow to get here because EA Sports’s NCAA 11 finally is released.

Thanks to the fine people at EA Sports for another consecutive year I have had the chance to get the NCAA football a game a week before it hits retailers to review for all you readers out there. For many thousands of gamers across the country, this is their yearly moment and one they don’t want interrupted by anyone or anything.

A few things to know about NCAA 11:

1. The computer is just better this year on the All American which is the difficulty level I play on. The offense and defense can read your play calls better than ever.

2. There are still some bugs in the announcing. Let’s say your last series on offense ended on a turnover when the defense intercepted the ball you threw. The computer punts the ball back to you and you’re on offense yet again. Before you pick your first play on offense the announcer says the defense will try to hold you again after stopping you on a fourth down attempt the last time you had the ball. But as you can remember, the last series you threw an interception. You weren’t held on fourth down. This is something that has been on going for the last few versions of the game. I’m wondering if EA Sports will ever get this bug resolved or if it’s just beyond the programming of gamer software.

3. There are more turnovers than ever this year. I think EA has finally upped the difficult levels on All American. I can’t even imagine what Heisman is like this year.

My favorite thing to do in the game is take one of the worst or lowest ranked teams and turn them into a winner in dynasty mode. This year I chose the worst team in the game, which was Eastern Michigan whose record was 0-12 in 2009. I wasn’t able to pass the ball for the first six games of the season. I literally couldn’t throw it. I might have one or two completed passes a game.

Through the reliance of building a strong running game, special teams and defense that became one of the best in the game, I was able to finish the season 10-3 and win the MAC Championship. I even took a picture for those who believed taking 0-12 team to MAC Champions can’t be done.

As the weeks went on my offensive progression grew between my at best decent quarterback and average wide receiving core. Thus it opened the hole to beat inferior opponents like Ball State 55-7. You can see below the results of my first year dynasty. I even got a few four star recruits. Now if only college football video game life crossed over into real life. The Eastern Michigan Eagles have their work cut out for them.

You can find everything about NCAA Football at http://www.ncaafotball11.com