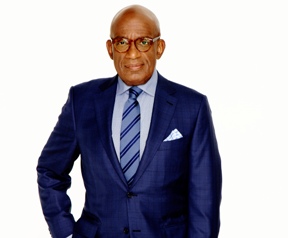 Since 1996, people across America have started their morning with Al Roker. The co-anchor and weatherman for NBC’s Today has informed millions of Americans about what to expect, climate wise, from all regions of the country. Over the years, Mr. Roker has been live on the scene, from some of America’s worst natural disasters and storms.

The veteran TV morning show personality has written a new book. An author of eight titles, he says this is the first one that is weather related. His new book is titled The Storm of the Century: Tragedy, Heroism, Survival and the Epic True Story of America’s Deadliest Natural Disaster: The Great Hurricane of 1900. The book features the stories of the people who lived in the town of Galveston, Texas where the worst reported storm in American history occurred.

Away from his media career, Mr. Roker gave us a very personal look into his life in terms of his weight challenges. In 2002, he got gastric bypass surgery and millions of Americans witnessed his weight loss from the procedure. We ask him about that, why his Weather Channel show Wake Up with Al was cancelled, as well as some other stories from his career.

On what inspired him to write The Storm of the Century, he tells us this:

“When I first came up with the idea for the book, I wasn’t even gonna write about Galveston. I was planning on writing about, focusing on the tenth anniversary of Hurricane Katrina. And in doing that, you start looking at storms for comparison and I had actually been in Galveston covering Hurricane Ike in 2008 and people always there were talking about the great storm of 1900 and so started to research that and the more I did I thought, ‘My gosh! This is really epic and I don’t think a lot of people know about this.’

So I actually hired a great researcher and author, a guy named Bill Hoagland and he really went digging and just presented me with this trove of information and stories and then it was just kind of left to me to weave this thing together. But in a sense, I just was really more of a traffic cop because it really, it’s an old phrase, but it really kind of holds true here, it almost wrote itself in that the things that happened and it just really defies description almost is I think if you made it up, I don’t know that people would believe it.”

Besides going into great detail about The Storm of 1900 in his new book, Mr. Roker also gives us an historic look at early meteorology in the United States. Of the eight books he has written, this is his first title that focuses on the weather:

“It’s funny, I’ve written eight books, this is the first one that deals with the weather and yes it did, that’s, what was interesting in researching it, I mean the reality is, look they didn’t have satellites, they didn’t have radar, they didn’t have super computers, they didn’t have weather balloons. And so they’re basically using thermometer, hygrometer, gyrometers, anemometers, basic weather technology that we still use today, although it digitized, but they were still using that and it was kind of amazing to think that was going on at the same time. But the beauty of it was, that if you look at, and we talk about this in the book, the Belen Meteorological Institute was run by these Jesuits in Cuba.

They had access to the most technologically advanced telegraph network in the Caribbean. So when storms came through they got basically real time data. So they were probably the foremost experts at forecasting Caribbean hurricanes and knew the path of this storm. And I find that fascinating that 115 years earlier than what we’re doing now, these guys had a pretty good grasp on hurricane performance and predicted the path of this storm and had the U.S. Government listened, probably far more lives would’ve been saved as opposed to losing 10,000 or more people making this the deadliest natural disaster in U.S. history and still is today.”

A meteorologist named Isaac Cline from the early 1900s provides one of the major storylines in The Storm of the Century. Mr. Cline believed that the city of Galveston, Texas did not need any changes to its infrastructure in order to handle a major storm or natural disaster. With the destruction caused by the Storm of 1900, history proved he was wrong in his analysis. Mr. Roker explains his importance in the story:

“Here’s a man who was pretty solid in his beliefs and by all accounts was a really excellent meteorologist. But at the time kind of ascribed to the idea that hurricanes of a certain magnitude had a curve to them, that they really wouldn’t strike land, they tended more curve and avoid hitting the Gulf Coast. Well, we all know now that is not true. But he ascribed to that and the city fathers were thinking, ‘Let’s build a sea wall to protect us.’ He kind of said, ‘No. You don’t have to. It’s not gonna happen. When we get storms and they’re might be some minor flooding, but we’ll handle that.’ And then in fact it turns out he was wrong.”

Though you have seen him live on TV from the scene of many of America’s worst storms, Al Roker was not on the scene during Hurricane Katrina in 2005 in New Orleans. He tells us why:

“I was sadly in the midst of back surgery and literally as Katrina was heading on shore. And so in fact I almost went down there. I was in excruciating pain, but I was chugging these pain killers and I was getting ready to get on the plane that morning and my wife said, ‘You are not going!’ And thankfully I didn’t because I had a disc rupture. I would’ve been stuck in New Orleans in the midst of that of all the suffering people were going through and wouldn’t have been able to get out and it would have been a nightmare. As it was, I obviously survived, but the nightmare for a lot of people in New Orleans and the Gulf Coast, you know, continues even today.”

During his morning weather reports on Today, you have heard him say these famous words, which he uses in his broadcasts, “That’s what’s going on around the country, here’s what’s happening in your neck of the woods.” On what those words mean to him today, he said this:

“It’s again a little slice of your life as far as the weather’s concerned. It’s not an in-depth, drilled deep kind of thing. It’s a here’s what’s going on and now you can get about your day, which is what the Today show is all about. We try to give you everything you need before you hit the door.”

It was back in 2002 that Al Roker had gastric bypass surgery. The procedure helped him lose weight. After his operation, he received national media coverage and shared his experience on how the operation changed his eating habits and life. Reflecting on where he is 13 years since the procedure, he shares this:

“Well, look, I’ve got young kids or relatively young kids. They range in age from 28, 16 and 13. But look, I’m 61 years old now and when you have a show that is the fairly active Today show, we do a lot of stuff and I don’t know that I could’ve of if I hadn’t lost the weight. I mean I was up to 340 pounds at my worst. I don’t think I could do what I’m doing today and I just feel better; I feel sharper; I have more energy; it just enables me to do my job better.”

It was reported recently that Al Roker’s show on The Weather Channel, Wake Up with Al, was cancelled. On why the show was taken off the air, the veteran anchorman says this:

“Well, you know, look, it was a decision The Weather Channel had to make and I respect it and I’ll probably do other stuff with them, but you know, we had a good six year run, proud of what we did. You know, if nothing else I get to sleep in a little longer.”

Through all his years on television, books he has written, movies and TV shows he has been in, playing himself, and many other projects, this is what Al Roker hopes the public has taken away from his life’s work:

“I hope that people feel a little better after coming in contact with me whether it’s on my show, by reading a book or you know, watching the Today show or listening to an interview. I hope that they feel a little bit better on the other side than they did before it started.”

You can check out Al Roker’s official website here.