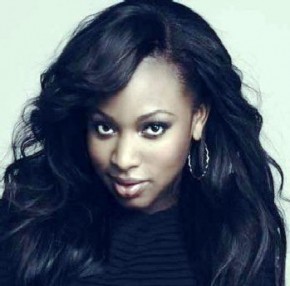 In the early part of her career, rising movie and TV actress Naturi Naughton sang in the all female group 3LW, along with two other performers. That ended in 2002 when Ms. Naughton left the group. Since then, Naturi has followed her own path in music. In more recent years, she has burst onto the acting scene with two big movies roles and now a role as one of the lead Playboy Bunnies in the new NBC TV show The Playboy Club.

You can listen to this CYInterview with Naturi, in its entirety, and read the highlights below.

In speaking with Naturi, I wondered if the acting portion of her career, which has taken off in recent years, was always something she had focused on, besides singing. This was her response:

“My inspiration as a kid was Whitney Houston and Mariah Carey and things like that, but I wanted to be able to sing because it was my first love…I knew singing was something I always wanted to do, but I also had something inside of me that was drama driven. I was driven to do things, plays in my school…I wanted to do stage. I wanted to do movies. I just didn’t know how that was all gonna come together, but as my career grew and fortunately I was given opportunities through a lot of people who believed in me, I was able to make the transition and I’m really happy that I did ‘cause I love acting and I’m enjoying it very much.”

After leaving 3LW and continuing on her own journey, Naturi agreed with me that taking her career on an individual path has led her to a good place today. She tells me the most important thing she’s learned since leaving the group:

“Yeah. I do. That’s really perfect that you say that. I do think it’s a happy ending and it’s not the end. I’m still in the process, but I think it’s a happy beginning really for me because I get a chance to start again and continue on doing what I love outside of the group. ..I’m glad that I was able to get the support and continue moving upwards and onwards and upwards from my past…The most important thing that I’ve probably learned is to stand up for yourself and what you believe to be important whatever that may be…There’s so many people who will try to persuade or sway you and tell you what’s ok and what’s not, but you have to know that for yourself whether it be in a role or a performance.”

In landing the lead role as the 1960s African-American Playboy Bunny on NBC’s new show The Playboy Club, Naturi says she did lots of research, including reading books and watching various documentaries. Ms. Naughton, though, points to being trained by a former 1960s Playboy Bunny, who is also an African-American woman, as an important part of her preparation to play the role:

“I also talked with different women who were bunnies. I met Pat Lacey who actually works with Playboy now. She actually trained us, did our bunny training. She’s an African American woman who was a bunny in 1965 if I’m not mistaken and she really gave me some insight on what it was like and what women went through and also being a black woman at that time. There’s different layers and levels there. Of course, not only being a bunny, but also being a black woman in the 60s…Really how controversial and progressive it was at that time. It was a big deal to choose to make your own money and to choose to be a bunny and to be powerful in your own right. I think it was major and I learned a lot about it.”

Ms. Naughton noted she couldn’t wait to get into her Playboy Bunny outfit. Her character, Brenda, has big dreams and is very ambitious. Naturi notes she and Brenda are similar in those ways:

“I knew I could pull off the Playboy Bunny suit and I could not wait to get in it. I looked at it. The color that I get to wear it’s this beautiful yellow and I wear a baby pink one as well. But I couldn’t wait to put my suit on. I knew it was gonna hurt though. I knew it was gonna be tight. I knew I was gonna have to hit the gym, but overall I did feel that I could pull it off…They both are very ambitious, very passionate about getting what they want out of life and dreaming big. I’ve always been a big dreamer, big achiever and a goal oriented person who had strong ambitions and I think my character is very similar in that way.”

In recent days, there have been media reports that some former Playboy Bunnies have stated the NBC show is not an accurate portrayal of what life was like for a bunny in the 60s. Naturi says it’s unfortunate that not everyone’s account can be portrayed in the show. She does say, however, there have been other bunnies who have said positive things.

“I talked to a lot of different bunnies and women and so many. We just had a luncheon actually with about eight bunnies, a couple of black women and white women, all of them who experienced the clubs all over the country and had so many positive things to say. Unfortunately everybody’s account is not gonna be the same. That’s just life…Unfortunately we all have different accounts at our working experiences…It’s not saying that those women’s accounts aren’t accurate, but it doesn’t mean that what we’re portraying is inaccurate. Some women really connect to our stories and real bunnies have come out and talked about how much they really remember The Playboy Club being very similar to what we’re doing. So I feel proud that we’re giving some of what was happening and unfortunately we can’t capture everyone’s account.”

In the 2009 movie Notorious, based on the life of rapper Biggie Smalls, Naturi had the opportunity to play female rapper Lil Kim who had a relationship with Mr. Smalls. That year, there were reports purporting Lil Kim did not like the way Naturi portrayed her. Naturi says she and Lil Kim have never met and there was never any kind of feud. Ms. Naughton says she’s now heard positive things about her portrayal of the role from people who know Ms. Kim:

“Nothing happened between me and Lil Kim. I actually never got to meet her [Lil Kim]. I actually tried to meet up with her. It was more I think you know, the people who write and make the movies. I’m an actress. I’m just hired to do the job and portray the role. I tried not to take it personally although of course it feels like that, but I knew I was just doing my part to just do everything in my power to make it as authentic, as raw and as edgy as possible…We’ve never met. We did not have a fallout. It was nothing like that…I heard positive things now through people that know her.”

In the 2009 remake of the movie Fame, Naturi played the role originally performed by Irene Cara. In the movie, Ms. Naughton had a chance to show off her singing talent. She reflects back on the experience of remaking the movie:

“For me, it was a dream come true to be honest. I felt like I really had some great moments and I was proud of myself. I worked extremely hard to learn the piano. I was studying classical music…It wasn’t just singing. I sang, I played the piano and I acted and danced in the movie. So for me it was an opportunity to show I think the multi-talent that you know, I’ve been blessed with.”

In discussing her belief that roles for African-American women in Hollywood are still limited, Naturi notes the challenges and possible disadvantages that darker black women face. She admits there has been a lot of progress, but she hopes there will be more opportunities for the next generation of black women:

“We all go through struggles as black actresses in general and black actors. So you know it can be limiting when there aren’t enough things written for you in major movies and major television, so it’s such an accomplishment and a big deal when we as women and also being brown skinned women, gets the opportunity to portray some of the roles when they’re aren’t so many for us. So I said that I think in referencing what other challenges you face as a darker skinned actress and there are challenges and you know I’ve lived through them and dealt with them and I’m actually motivated by everything that I’ve been through. And what I would say is we have come such a long way. ..I think just as black women we are doing some great, great powerful things and I think it’s on the up and up and there will be more for hopefully the next generation after me and that’s my goal.”

Finally, Ms. Naughton tells us what we should know about her that we do not already:

“That I am an extremely hard worker who generally loves what I do and also just the kind of person I am, which I think informs how I go and approach roles. I’m a very down to earth, round away girl from Jersey. I love for people to know that and that I enjoy inspiring other young people. I have a huge passion for the arts and young people and expressing themselves through that because I was able to do that as a child with music classes and I think it’s so important to keep that in our education system. I think people should know that I’m really just like anyone else out there who had a dream and have been fortunate enough to live it out. So it just lets people know from all walks of life you can do anything and I hope to be truth speaking and walking that truth every day.”

You can find out more about The Playboy Club here.

6 Replies to “Naturi Naughton: A Happy Ending and a New Beginning; From 3LW to Notorious to Fame and Now NBC’s The Playboy Club, This Actress Can Do it All”