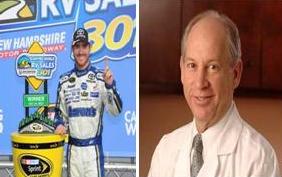 Each year, a reported 900,000 Americans suffer blood clots and up to 300,000 end up dying. For Nascar driver Brian Vickers, blood clots have impacted his life on two different occasions. Dealing with blood clots sidelined his auto racing career.

The winter season is, reportedly, when the incidents of blood clots rise.

Brian Vickers joins me, along with Dr. Jack Ansell, Professor of Medicine at New York University’s School of Medicine, to inform people about dealing with blood clots. You can read and listen to the entire CYInterview below:

Speaking about how blood clots can be prevented, Dr. Jack Ansell offered us this:

“This is a very, very common problem and the public’s not aware of it and in fact that’s part of the problem, not being aware of the signs and the symptoms of blood clotting or clots in the leg. So I think Brian [Vickers] illustrates one particular risk factor and that is being in a car cramped for hours at a time I think when he had his first event. He had a long day of racing, continuous hour after hour and then after the track he went on a long airplane trip. So and folks have heard about the problem of flying and the risk of blood clot in the leg. In any case, those are the source of things. Avoid a sedentary lifestyle. Get up. Move around. There are other risk factors like birth control bills in young women or hormone replacement therapy, being overweight, cancer and other things that also can cause blood clotting.”

Discussing the symptoms of blood clots, so that the public can be more aware of the health challenge, the New York University School of Medicine doctor told us this:

In the last few years, blood clots have put Nascar driver Brian Vickers on the sidelines, unable to race. Speaking of the treatment for his blood clots, the racer said this:

“Both times I was on a blood thinner and had the risk of bleeding as anyone would on a blood thinner and I had to be out of the racecar for that reason. But how it impacted my life was very different. The first experience was cumbersome, it was a hassle and painful at times. I mean I had to have constant blood monitoring and, you know, blood draws and finger pricks and dietary restrictions. I could eat a lot of the things I love, but nonetheless, you know I was able to come off it and go back to racing. The second time was a different experience, really a different experience off the race track. Obviously I still had to be out of the race car with the bleeding risk, but none of the dietary restrictions, none of the blood draws, just a pill. I started with a pill twice a day and then went to a pill once a day. Now the biggest thing I have to do is just remember to take it.”

“Well, they do increase. It’s not dramatic, but there certainly is an increase in incidents and exactly why is still speculative. But the possibilities include the fact that people are more sedentary, they’re more indoors, as well as traveling more in long flights and so I think those are some of the reasons that may contribute. Even the temperature itself may affect blood clotting in some fashion.”

Brian Vickers has finished his latest treatment for blood clots and is getting back in a racecar for the upcoming Nascar season. At the age of 20, he became the youngest champion in any of Nascar’s top three driving tiers. On February 23rd of this month, he will be racing in the Daytona 500. Speaking about the upcoming race, he said this:

“I am looking forward to the opportunity to get back in a racecar. It’s something I’ve been doing a long time in my life and it’s something that I really love. You know, it’s my passion. So I’m just, I’m really excited to get back in the car and I’m also looking forward to racing for a championship again. … I also want to thank you for, you know, giving us the time and yourself, raising awareness to this issue. You know, clotting is a serious issue and affects a lot of people and that’s why we’re here today. You know, I’m very thankful to have the medications I’ve had to get me back on the race track.”

You can email Chris Yandek at [email protected]YInterview.com Chris is available for interviews to comment on anything featured on CYInterview.