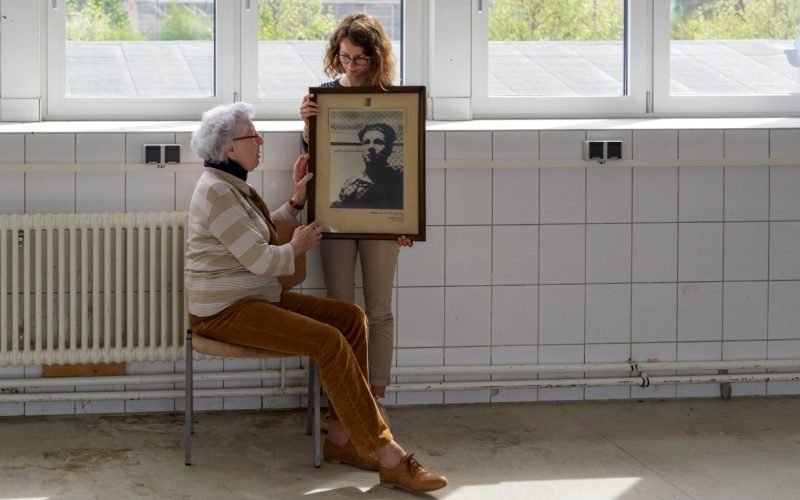 Next Sunday is the Academy Awards. Director Anthony Giacchino and producer Alice Doyard have put together an important documentary film titled Colette, which has been nominated in the Best Documentary Short Subject category.

The 24 minute film, is about Colette Martin-Catherine. A woman now in her 90s, she was part of the French Resistance, which fought against Nazi Germany’s occupation of France during World War II. Colette’s brother Jean-Pierre was killed by the Nazis. In the film, Colette travels with Lucie Fouble, a budding historian, to Germany to visit the concertation camp where her brother died. As you can imagine, the journey is quite emotional.

Colette is a documentary short about loss, grief, regret, sadness and the eventual triumph of good over evil, albeit at a high cost.

Director Anthony Giacchino said it was owing to luck that they met Colette Martin-Catherine and that this short film came together:

“It was sort of a piece of luck. We didn’t, you know, start out intending to make a film about her. In fact, we didn’t even know her when Alice and I met. And Alice and I met the first time in April of 2018 when we were together thinking about some stories of World War II to tell. And it was just lucky that our tour guide in Normandy taking us around said, ‘I know a woman who was in the French Resistance. Do you want to meet her?’ And it was just like that. That’s how we heard about her.”

Producer Alice Doyard tells us her passion for filmmaking is what drew her to putting Colette’s story on film:

“My passion is to give a voice to people who have a moving story to tell and we were, both of us were seduced by Colette when we met her for the first time because Colette, she has very deep memories of the war. She could speak of the war as if she was still there. And she was a very moving person. She was, she had very truthful and frank tone.”

Talking about the journey that Colette takes us on, director Anthony Giacchino shared this:

“This pilgrimage as Lucie and Colette, you know, ended up referring this to, right. Referring to it as, you know, it was an act of resistance. It was a continuation of the act of resistance. It was remembering, right, what had happened to Jean-Pierre, but also during that period. So, yeah, Colette likes to, you know, talk about how she didn’t do anything and that her brother was the hero and mother was sort of the strong person, but Colette has been a fighter, in many ways, resisted her whole life.”

Now that Anthony and Alice are both Oscar nominees, we asked them both what it would mean to win the Academy Award next Sunday:

“I wouldn’t be able to look at it without thinking that the reason I had that was because of this, you know, horrific event in World War II where millions of people, you know that Jean-Pierre, was you know, he hadn’t been killed and this, you know, like we wouldn’t have known this story. So, that’s sort of is how I look at it, right. It would be a wonderful honor, but it couldn’t, can’t be completely, let’s say joyful or joyous, you know. That’s at least my take on it.”

“This talks about solidarity and how united actions can do amazing things when we face a global threat, when we face problems, a challenge that touch the whole world.”

Featured columnist Jay Bildstein joins us to discuss a variety of topics about the film Colette, with the Oscar nominees.

Listen to the entire Anthony Giacchino and Alice Doyard CYInterview:

Listen to the entire Anthony Giacchino and Alice Doyard CYInterview on YouTube:

You can watch Colette and all the other nominated Oscar short films by clicking here.

You can find Colette on Twitter by clicking here.

You can find Colette on Facebook by clicking here.

You can find Alice Doyard on Twitter by clicking here.

You can find Anthony Giacchino by clicking here.