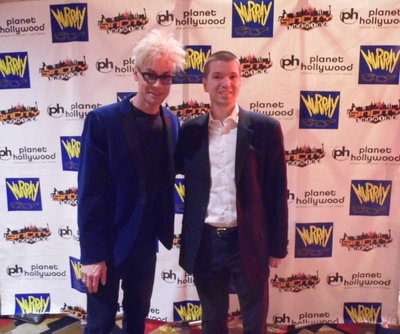 When families come to Las Vegas, they want to take part in enjoyable, wholesome activities. Murray The Magician’s show at the Planet Hollywood Hotel and Casino fits that bill. After his show, the former America’s Got Talent star poses for free pictures with show attendees. You can snap them with your camera or cellphone. Additionally, Murray signs autographs for his fans outside the Sin City Theatre. It is easy to see how this kind of engagement with his audience and fans is appealing to Las Vegas visitors. See our photo above from his show on March 24th.

Whether you have seen him on the above mentioned America’s Got Talent, Pawn Stars or his YouTube channel, which has over 500,000 subscribers, you know that Murray Sawchuck will astonish you with a variety of tricks, leaving you shaking your head in wonder. If you go to Murray’s show, there’s a chance he will call on you to participate and borrow one of your possessions. Be ready to be amazed and surprised with some of the things he does.

After his show, we had a chance to interview Murray to speak about some of his career highlights and Las Vegas stories.

On having his own show on the Las Vegas Strip, at the Planet Hollywood Hotel and Casino, Murray The Magician says this:

“When your face is on a billboard and it is your show, you realize you’re reliable [sic] for everything, their experience from the time they walk in their theater to the time they leave and you want to give it the best result.”

Greatest compliment he has ever received for his magic?

“I’ve had this a couple of times where after the show people say, you know what, I brought my mother in law or I brought my mother, I brought my daughter or whatever it is and they’ve lost somebody in their lives or something sad’s happened over the last year and half and they haven’t laughed yet and that was the first time they’ve seen them laugh or have a good time. So that’s always nice. You don’t realize the effect you have on people.”

One Reply to “Murray The Magician: Engaging Magic Man Astonishes at the Planet Hollywood Hotel and Casino, Fun for the Whole Family”