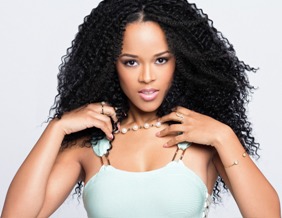 It is not common for an unknown actress to land a major role on a TV show, particularly one that becomes an overnight hit. For Serayah McNeil, playing singing sensation Tiana, on the popular Fox TV show Empire, is remarkably her first role. Known to her fans as simply Serayah, she now wants people to recognize her for all she is doing away from the urban music TV drama.

With the opportunity to perform in front of a live crowd at the BET Awards in June and to work with A-list music star Taylor Swift on a variety of projects, it is only the beginning of Ms. McNeil building a multidimensional career. Serayah was also with Taylor Swift, Selena Gomez and many other big names at this past weekend’s MTV Video Music Awards.

Many people in show business will be placed in one genre and many times are not taken seriously when they try to do something else outside of what is perceived to be their specialty. For Serayah, playing a music star on television has led her to now performing as a music star in real life – think Jennifer Lopez as Selena and then as a pop star in her own right.

This is the moment she has been waiting for. Though Serayah is happy people know her as Tiana from Empire, they are finally getting a chance to see all the talents she has.

We had a chance to, speak in-depth, with Serayah about who she is, what the last year has meant to her and what her hopes are for the future. You can read the highlights and listen to the entire CYInterview below:

Listen to the entire Serayah CYInterview:

It was through a friend she knew in high school that Serayah learned of the role that prominent casting director Lea Daniels was looking to fill. The part was for a young, beautiful music star who was captivating. After numerous rounds of auditioning, Serayah would become Tiana on the Fox TV show Empire. Shortly after that, the show became one of the most watched programs this year and became a topic of conversation on all the media channels. Going from a college student with a part time job to being on a hit show overnight was a real Cinderella story for the actress. She told us this:

“I have often compared my life story to a not as drastic I guess, but just a Cinderella story. It’s been, it’s such a change for me in everything that I went through personally. So for it to happen the way it happened and I never thought it would happen that way, so it came out of nowhere and honestly, I just keep saying I’m so blessed to have been where I was at that time and everything that fell into place like it did. So, it was honestly just like I had a fairy godmother and just there it went.”

As to how she was feeling the moment her Empire role began, Serayah shared this:

“I was lost for words. I think I wanted to cry, but couldn’t. I was just very, very emotional and it was everything and more that I thought it would be. I didn’t know it would be, you know, one of the most looked at and popular shows in America right now. So like all of those things have over exceeded my imagination for myself and for my involvement in the show and for the show, but I think just being a part of it initially and just knowing who some of the cast members were going to be, I just felt very, like immensely blessed to just be a part of that kind of project for my first thing at least.”

Though Serayah is very grateful for what playing Tiana has done for her, she now wants people to know her name, along with all she is capable of. She is happy she is not simply a television actress relegated only to that medium:

“I’ve been really working hard and coming up with strategies and plans to separate the two because I am very much so different than my character musically and personality wise. So, a lot of people come up in the business and kind of go from role to role and people just see them gradually grow. As for me, they don’t know who I am, you know, at all. So it is really important for me to distinguish myself outside of the show.”

What makes her story unique is the fact she went from playing a music star on a TV show to then, only a few months later, performing music on the BET Awards in June. From there, she performed with Taylor Swift during her concert tour stop in Chicago in July. Additionally, she was featured in Ms. Swift’s music video for the song Bad Blood. Being able to play a music star on TV is one thing, but then becoming the real life music star off TV in such a short time span is not a common story. Reacting to that, she said this:

“Wow, I’ve never, gee I think I’ve known that, but I’ve never looked at it that way and that just really makes me realize, you know, the similarities and how it ties into each other because these things come and they go so quickly. I know just preparing for the BET Awards and preparing for the Taylor Swift concert, it just comes and goes and the moments are gone. So I try, try to remember to take hold of those moments, but it’s very true. I mean, she’s [Tiana] a huge pop star on TV and I’m getting to do a lot of those elements in real life and that’s the amazing part though in getting fans to relate to Serayah and see more about me and really believe how that story connects.”

When it comes to Empire, she wants everyone to know that is her voice when Tiana sings on the show:

“From the very beginning people were asking, so, you know, is that really you singing? Or do you have a double and all that kind of stuff. So I’ve been trying to voice and say, ‘No. It’s really me, it’s really me.’ So it’s so, so great that I have gotten to have those moments, which were huge moments and everyone tuning into those moments where I’m really singing, I’m really dancing, really performing and it’s really me.”

In May of this year, Serayah sat next to Taylor Swift at the Billboard Music Awards. She was also with Ms. Swift at this past weekend’s MTV Video Music Awards. The two have been building a friendship and been seen together on other occasions as well. On what it was like to appear and work on Ms. Swift’s Bad Blood music video, this is what she shared:

“Being a part of the Bad Blood video and everything else with Taylor Swift is completely a thrill. I’ve had so much fun and it’s just an eye opening moment honestly and I get to live outside the show and be myself and be creatively, you know, expressive in that way and I feel so lucky to be able to do that because I know it’s very hard to cross over like you’re saying.”

When it comes to Serayah’s own music, she is currently working on covers that she will releasing for her fans on Sound Cloud. The 20 year old is also looking forward to working with some producers. She is hoping to convey her story through her music in the right way:

“I really want my fans to connect to me in a personal space because that’s what I loved about music and that’s what, I listened to music when I’m sad, happy, you know, ecstatic, things like that. So I really relate to music in that way. So that’s something I’ve always wanted to bring out into music and to my fans is to really tell stories about things that I’ve been through, happy and sad moments.”

Now that she has made her way into both acting and music, who does Serayah want to model her career after?

“Here’s my fusion. Like, I would say the work ethic of Beyonce, the longevity of Sade and the fearlessness of Rihanna.”

Serayah’s manager is her mother Kanika McNeil. Her team also includes veteran agent Yasmine Pearl of Osbrink and veteran New York based publicist Anne Edmond of the Craft Agency. On what her mom and her team have done for her over the last year, she says this:

“I said I wanted to do this around nine years old and we’ve been doing it from classes to workshops to just singing lessons and auditions, everything, headshots, just constantly, constantly, constantly. So, this year has just been a lot for both of us [Serayah and her mom] not really knowing some things, but we’ve been so grateful to just being, falling into place with people like my agent Yasmine Pearl. She’s amazing and to have an agency like Osbrink that’s very, smaller and more personal with you, which is like great for my path and what happened and my story and to have a publicist like Anne who is very passionate and so sincere and genuine and making things work for me.

Just having people around I think that genuinely care and are like family. My mom has just been thrown into this just like I have, but she’s done such a great job in you know, in staying, keeping me humble and keeping me very motivated as well through the difficult moments and very, like I say, the pressuring moments. So it’s been a great ride and I can’t wait for what’s next.”

What can we expect from her in Season 2 of Empire?

“We’ve seen Tiana for the crazy things she’s done, but this season I think there’s gonna be a lot more in-depth with Tiana and her feelings and maybe some more of where she comes from and just seeing her more I think will give people more of an insight on my character.”

As Serayah continues to build her name and brand, much more excitement is ahead. No doubt she is very grateful for where she is currently:

“My story is very unique. I understand that, but I’m so, so humbled to finally be here and I just want to work so much harder and I’ve lived through a lot in my life and struggles and stuff like that, so I’m just really glad to be here and I’m really just focused and I want to make great music and great film.”

One Reply to “Multitalented Serayah, Fox’s Empire’s Tiana, Opens up about Her Success, Stardom, Working with Taylor Swift and the Future”